One of the key things I'm learning in my classes at NPTI (the National Personal Training Institute) is that functional training is key to a strong body. Often runners avoid resistance training because they don't want to bulk up and add extra muscle that they'll then have to carry around while running.
Many runners don't realize that some added muscle mass can actually help make them more efficient runners. The other misunderstanding is that unless you're following a hypertrophy program designed to create those bulky muscles, you're not going to turn into "Arnold" by doing resistance training. Using lighter weights and more repetitions focusing on the quads, abs, hamstrings, glutes, calves, shins, and hip flexors will help build muscle endurance. Even doing upper body resistance training can aid a runner, especially an endurance runner. Think about it. Once your upper body gets fatigued, what's the first thing to go? Your form. Once your form is gone, then your performance is going to wane.
To go a step further, functional resistance training (using stability balls, bosu balls, resistance bands, foam rollers, etc.) is even better for runners. Functional training involves working the muscles (with or without) some resistance in a fashion that simulates natural movement. Adding specificity to functional training is an even a better approach. Specificity is gearing your functional training in a manner that simulates movements related to your sport.
The biggest benefit of functional training is that it leads to better muscular balance and joint stability, which will have a more positive impact on your performance as well as decreasing the chance of injury. 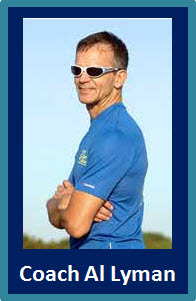 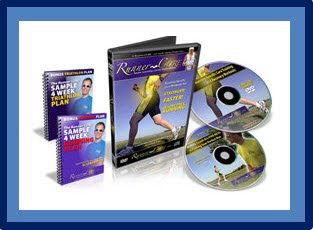 The DVD presentation isn't the most polished or "snazzy-looking" exercise program I've reviewed, but that actually makes it more appealing to me. Coach Al is a real guy, a real coach, and a real runner. Somehow watching him go through the various routines is much more believable almost like I'm at one of Coach Al's workout sessions. I kind of like that. When he tells me to "squeeze that glute....hold..." I chuckle, but I actually do it. The camera zooming in on the Ironman tattoo on his calf humors me too, but then I think...hey this guy really is a runner, a hardcore runner. The unpolished feel ends up adding to the credibility.

The other thing that adds to the credibility of the program is that its purpose—using functional exercise to build a stronger core, more flexibility, better balance, and increased strength—is dead-on. More and more research is showing that performing specific functional strength exercises that mimic the neuromuscular demands of running improves running economy, lactate threshold, and resistance to injury better than any other type of training.

The program sells for $69.95, but I checked the website and it's now being sold for $49.95. I highly recommend you check out the website and consider using Coach Al's program. If you don't think Coach Al's program is what you want, check with your local gym and see if they offer functional training for runners. Coach Al's Runner-Core program gets 5 out of 5 "Dudes" on RunnerDude's new rating scale.
Posted by RunnerDude at Saturday, August 29, 2009

Glad to see you do this post. I have been trying to get more runners to understand the significance of functional training to their overall success. Personally, I have done it for years and it has helped keep me at 6% bodyfat, strong as hell and still outrunning guys much younger than me. I'm 42, still can clip off mileage under 7min/mile and then do 15-30 min. of functional conditioning in circuit training mode with only 15 - 30 sec. rest intervals. BTW - also can do 22-25 commando pull ups each side. One of my favorite upper body exercises is the Hindu push-up with feet elevated. I do enjoy your blog. Good luck with your new career.

Hey TC! Thanks so much for the feedback. Really value your opinion! I'm working hard on those pullups...no where near your amount of reps, but I'm getting there. Maybe between the two of us we'll start converting some runners to functional training.

OMG, OMG, OMG - this post is RIGHT ON THE MONEY!! I'm in physical therapy right now for bad knees and my PT says that a good portion of it is from weak hips and tight IT band. We have been doing exactly what you're describing- low weight, high rep, balance work, resistance bands, etc. and it is kicking my butt. But, I love it! My balance has improved substantially and my knee pain has greatly lessened. I'm running again! Plus, my legs are so much stronger.

Hey JenZen! Thanks for much for sharing your experience with Functional Training! No better way to spread the word than for the reader to hear from real runners using functional training and seeing great improvements like you and TC have experienced.

@RunnerDude - I hope we can convert more runners to add functional training. People will be surprised at their performance and how good they feel.

Thanks TC!, for such great feedback! My passion is helping runners stay injury free and run faster and easier! One of the best paths to that is through smart functional and core training! All the best for continued success! Thank you!!