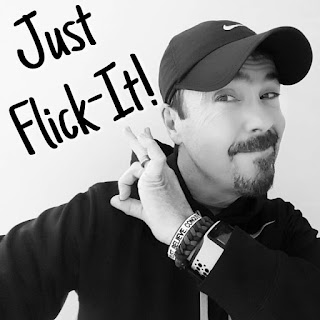 Many half or full marathoners can attest to hitting a wall of self-doubt that smacks them in the face about halfway through their training.

Things are going just dandy in their training  and then all of the sudden, they have a tough run and reality smacks them in the face. "Oh my God! That was hard!" How am I ever going to run 10 or 11 more miles!"

This experience is pretty common with new marathoners. Most have actually had a similar experience on a smaller scale, but they forget from whence they came. In talking with a struggling half marathoner the other day, I reminded her how not too long ago, she was worried about completing the 13-min run/2-min walk intervals when she was in my beginning running group. Also reminded her that she killed it.

For most individuals it's pretty common for self-doubt to creep in when we they dip their toes into the unknown. The initial response for many is, "I Can't!" But here's the thing. You can. You have to just flick-it! Flick that self doubt to the curb! Easier said than done, right?

The first step in clearing your mind of "Can't" is remove it from your vocabulary. Next step is to be "Real." It's going to be hard. Marathon training is one of the hardest things you'll ever do. It will be one of the most rewarding and life-changing things in your life too! Training for a marathon causes you to dig deep and find a you that you may never even knew existed. Once you find this new you, you'll be amazed how much you pull on new you in other areas of your life. 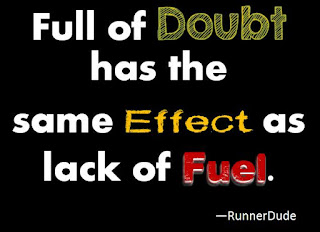 So, why does it happen around mile 15, 16, or 17? Well for most, that's new mileage for them. So just like when they first began to run and it was hard and they were fatigued, and they were sore, they're going through that again. Many at this point will experience an acclimation phase while their body adapts to the new demands of this new frontier.

So, what do you do? You run smart and you listen to your body not your head. If you are extremely tired and fatigued, then skip that next speed workout. When your body say's "Uncle" listen to it and take a rest day. Pull back on the pace on your long runs. You're probably running them too fast anyway and now that you're in new territory, your body isn't able to maintain that same pace (plus you need to be running slower on the long run anyway). Make sure you are hydrating and fueling properly pre-, during-, and post-run. Those two gels your  took for a half marathon probably aren't gong to hack-it for a 20-mile run. figure how how to adjust your fueling for those extra miles. Depleted levels of electrolytes like sodium and potassium can increase dehydration even if you're drinking a lot of water. So be sure you're on top of replacing them through your fueling, electrolyte tablets, or sports drink.

According to Dictionary.com, moxie is the ability to face difficulty with spirit and courage. It goes on further to say that the term was used as far back as 1876 as the name of a patent medicine advertised to "build up your nerve."

Too bad there's not a bottled "marathon moxie" that you can gulp down just before the start and then be miraculously provided with all you need to complete your training. Man, whoever invents that will become a millionaire! In reality, marathon moxie does not come from a bottle, it comes from within you. 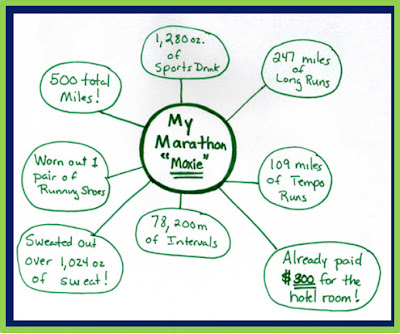 If you're having doubts, I want you to do some reflection. Sometimes writing down and documenting all that you've done during your training can visually confirm all your hard work and the commitment you've exuded over the past several months. This doesn't have to be a long and tedious task, just use a brainstorming web like I've done here. Once you see all that you've accomplished there's no way you can doubt yourself! (See my attached pic. This is a web I did a while back when I was training for a marathon.)

Another way to clear you mind of Can't and flick that self-doubt to the curb is by finding a running mantra to help lift you up on those hard runs. The official RunnerDude mantra is Trust. Believe. Conquer! It stands for Trust in your Training, Believe in Yourself and Conquer your Goals. Here are a few more mantras to consider or make up your own!

If you have a coach, talk to him/her about what you're experiencing. Ask about taking rest days. Ask about fueling and hydrating. They are there to support you. They have lots of suggestions and tips to help you. (https://runnerdudesfitness.com)
Posted by RunnerDude at Friday, September 13, 2019 No comments:

Slow is Relative. Let it Go! 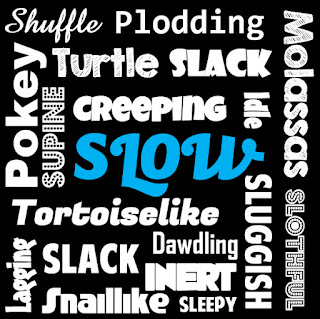 I've worked with hundreds of beginning runners and runners new to distance running such as training for a first half or full marathon. The number one single-most  hindrance or hold-back to success that I see in the runners who struggle is latching on to "I'm so slow" and not letting it go.

Thinking speed is a mark of a "real" runner gets so many runners (new and experienced) into trouble. Beginning runners that bolt out on that first 1-min run of a 1-min run/5-min walk interval often are the ones who struggle later in the program or quit. The slower-starting runners are usually more successful with the program. Starting slow and building is much easier on the body and mind, then starting out too fast and having to pull back. On the other end of the spectrum,  marathon runners that run all their runs fast even their long run, often end up peaking too soon or getting injured.

Fast is not always good. There's research to back it up. Research shows that runners that mix up their run paces over the course of the week are usually better runners on race day and are less injured. Often runners who always run fast, acclimate to that fast feel. That makes it's hard for them to tell when they're running too hard. This often leads or over-training and often leads to fatigue, lackluster workouts, and often injury.

Tips for the "slower" runner: