The Body Bottle: Hydration on the Go 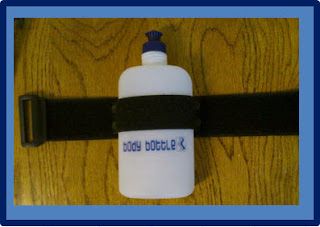 Because I sweat so much on a run, I have to carry fluids with me on most runs, especially a long run. I use both a handheld water bottle and a hydration belt that holds 4 smaller bottles. Both of these work great, but I'm always on the lookout for new running gear that improves upon an old standard.

The other day on Twitter, I received a Follow request from Body Bottle. The name piqued my curiosity so I checked out their website. Body Bottle is a new hydration product that's an alternative to the hip-belt and hand-held options. Basically Body Bottle is a wide Velcro band that fits around your upper arm and the plastic bottle attaches to the band. So basically your water or sports drink is carried on your upper arm and when you need a sip, you pull off the bottle, drink, then stick it back in place.
This looked like a cool idea, but I was a little skeptical about how well it would stay on my arm and how well the bottle would remain in place once filled with water or sports drink. So, I contacted Body Bottle and asked for a sample so I could test it out.
The thing I liked about the Body Bottle when it arrived was that there was nothing to figure out. I opened the box, washed the bottle (shaped more like a flask to fit the contour of your arm), filled it up, slipped the band on my arm, and attached the bottle. That was it! Then came the real test—running with it. 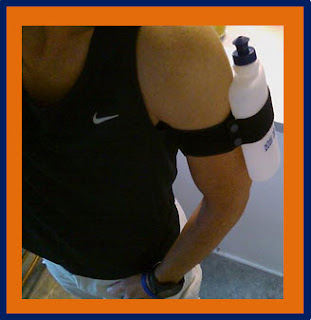 It actually works quite well. I was surprised how securely the bottle stayed in place. It didn't slip around and it didn't bob up and down. It did take a few times to get the hang of removing the bottle (because the quality/grade of Velcro is very sturdy), but after a few tries I had no problem detaching the bottle. Reattaching is very simple too—just stick it back on the band.

The only thing that was a disappointing was the size of the bottle (12oz). I would be able to use the Body Bottle on a run up to about 6 miles, but not on a run much further than that and definitely not on a long run. I guess you could run with a bottle on each arm, but that would mean buying two bottles. The Body Bottle sells for $24.95 each, but you do get 20% 0ff when you buy 2 or more. Also, the website says that if you're running a half or full marathon in 2009, you get a 20% discount.

So, Body Bottle Gets 4 out of 5 Dudes on RunnerDude's new rating scale. Great product just needs a bigger bottle option. Check it out on their website and give it a try!
Posted by RunnerDude at Friday, August 28, 2009

Interesting product...I have a hard time running with any sort of bottle attached to me, whether it's my hand or my waist or whatever. I don't like running along with a constant sloshing sound. I don't know if it would be better if it was attached to my upper arm or not...

is something holding it up at the bottom of the bottle? It looks like it would fall through.

Hey Lorenda! There's a piece of Velcro permanently attached to the back of the bottle. So all you have to do is pull it off and stick it back on.

Hey Lorenda! Me again. LOL! That piece you see on the front ofhte bottle is also permanently attached. From the picture it looks like you slip the bottle into a strap, but you don't. You just stick the bottle on the strap that's attached to your arm and pull the bottle off the strap when you need it.

Hi - My first time here (via RunnersLounge), I like your blog!

This bottle looks interesting - I have a hard time with the waist packs, and have thought about trying a handheld....I may try this one though!

Thanks for the info!

Hey runrockstarrun! Welcome to the blog!! Thanks for the feedback on the blog. Just checked yours out. Great stuff!! The Body Bottle works really well, I just need a bigger bottle. Body Bottle just contacted me and said they were working on a larger version. Yeah!

interesting product! I am a HUGE fan of the amphipod hydraform handheld bottle, that I was able to get with a gift card I won off of this blog (wooohooo!) I really don't like the waist belts either. If ever I get sick of the handheld I will try this one out!

Hey Heather! I'm a fan of the Amphipod handheld too. I've used the first model they came out with for probably 4-5 years now. Was hoping to find something handsfree that wasn't a belt for longer runs. When Body Bottle comes out with a larger bottle option (maybe aa 20oz) I'm gonna definitely try it out.

What an interesting concept! I agree that 12 oz would NOT last very long - especially down here in the Louisiana heat and humidity. I truly love my fuel belt, but this might be nice for the shorter runs. Thanks for sharing!