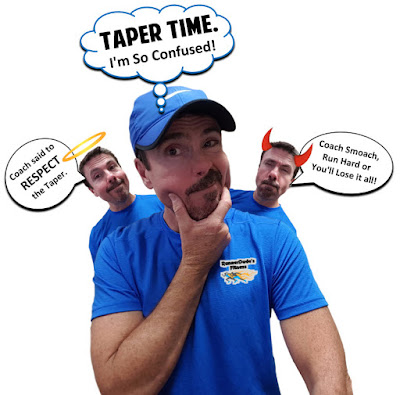 During a past training cycle, I overheard one of my runners telling another runner (who sometimes
runs with us but isn't one of my race trainees), that he was in his marathon taper time. The other runner proceeded to tell my runner, "I never tapered before a race. It's a waist of time. You lose too much of what you've gained." My runner proceeded to say, "I don't know, I really think there is something to this taper thing. I'm going to follow what my coach has planned out for me. I mean I paid for it. Might as well, follow the plan. But, it makes sense what he's telling me."

That was a proud moment as a coach. This particular runner did not follow the plan with his previous race. Every run was a hard run. He put in extra runs on his own and didn't taper. Result? He got injured a few weeks prior to race day. He still tried to race on race day and injured himself more. This training cycle, he decided to follow the plan and he was doing great! The other runner is a fast runner. But like my race trainee's former self, he runs every run hard and never tapers. As a result he's often injured. I often kid this runner (but not really) that he's not allowed to talk to my runners trying to lure them to the dark side.

More is not better. Never a better example than with marathon taper. The marathon taper is probably THE most important part of race training. So, what is taper time? There are different approaches, but the standard taper for marathon training begins three weeks prior to race day.Typically the last long run (which is often your longest run) is three weeks from race day. The following long run is 75% of the longest run, and then the long run before race day is 50% the distance of the longest run. So, if you're longest run is 20 miles, then the following weekend the long run will be 15 miles, then the next long run will be 10 miles with the following weekend being race day. The mileage of the other weekly runs during this time can begin to decrease as well. My runners usually have a speed workout on Mondays, a tempo/progression run on Wednesdays, and easy run on Thursday or Friday and then their long run on Saturday. During Taper time, the distance of the Wednesday runs begins to decrease and usually I have them run an easy 4 miler the Wednesday the week of race day.

So what makes doing less the last three weeks help you on race day? High mileage week after week depletes a runner's glycogen levels. It also decreases levels of enzymes, hormones and antioxidants. Research has shown that these levels return to normal during taper. Even more important is the repair of muscle damage that takes place during taper. Runners that push their training up to race day also run the risk of compromising their immune system increasing the chances of catching a bug before race day. Taper allows the body time to bolster the immune system. Research has also shown that runners that heed the taper tend to have times 5 to 10 minutes faster on race day than those that do not taper in their training.

The main problem with marathon taper is what I call the Stir-Crazy Complex. You've been running, running, running, for so many months then all of the sudden, just before race day, you're not running nearly the mileage. It can play with your mind. Doubt begins to creep in. You become insecure that you've done enough. This is normal. This is where you have to Trust in your Training. Believe in Yourself. And Conquer your Goal on race day. Doing more may occupy your brain and your body, but it will only hurt you on race day.

Use taper time to relax, recover, and focus on nutrition. Also use this time to think through mental strategies for race day as well as make your race day check list. A check list is particularly important if your running a destination race involving travel.

Also use this time to reflect on and appreciate all the hard work you've put in the past several months.

Posted by RunnerDude at Tuesday, October 10, 2017 No comments: