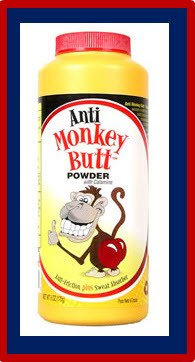 Sweat, tight pants, and a tiny seat...a problem combination for sure. If you bike, you probably know where I'm headed—chafing! Okay, there, I said it. Chafing of the bum, bottom, backside, buttocks. Whatever you want to call it, it ain't no fun. Probably a close second to a runner's chafed nipples. Ouch!

I'm RunnerDude, so you've probably figured that I'm a runner. Well, every now and then I do hop on a bike and go for a ride. One thing that has always been a killjoy for me when biking is chafing of the backside. Yes, I have bike pants that fit properly. Yes, my seat is fitted properly for my size. Yes, I change positions frequently when riding. I do all of these things to no avail.

My problem is I sweat, sweat, and sweat some more. Moisture and tight pants are not the friend of a cyclist. As a runner, I know that there are products like Body Glide that help prevent chafed nipples, so I looked for some similar products for a chafed booty. I discovered several different kinds of lotions, creams, and salves, but sitting in goo just didn't appeal to me. I finally ran across a powder called Anti Monkey Butt. It pitched itself as a "Sweat Absorber and Friction Fighter." Just what I needed! Plus "Friction Fighter" sounded kind of superhero-ish, so I decided to give it a try.

The idea of pouring powder down my pants brought back memories of diapering my three kids, so this method wasn't all that appealing either, but it was better than sitting in goo, so I gave it a try. I was pleasantly surprised. It didn't take a lot and it really did seem to work. I still sweated like a pig, but the Anti Monkey Butt powder created enough of a barrier that I didn't experience any chafing. Not sure what would happen on an extremely long ride, but I was pleased with the results I had on a moderate ride, in 90°, in 80% North Carolina humidity. Can't get a better test location than that. Well maybe Florida.

Actually it worked so well, that I've even used it on a few runs and it worked just as well. So, if you have chafing problems, be a FRICTION FIGHTER like RunnerDude and give Anti Monkey Butt a try! Man, does that sound like an infomercial or what? I've discovered that the makers of Anti Monkey Butt have some pretty hilarious ads. Check out the one below.

That is cracking me up!!

As a cyclist I have to throw out there that I've had great luck with something called Chamois Butt'r. It's a cream, basically a skin lubricant, that you apply to your skin or your shorts to reduce chaffing. Works great for me. Also, the pad in your cycling shorts should be doing all the wicking of moisture, that's why it's there in the first place. Other than that, I'm just thankful my nipples have never been chaffed on my runs. Ouch!

That's funny! To be honest, I hope to get to the point that I actually get "monkey butt" when I run. That'll be the day!

Hey Shelley! That clip kills me too!

Hey Benny "Toes" Dodge! Welcome to the blog! Yep, have that pad thingie. More like a sponge. Squish, Squish. LOL! Luckily I don't have the chafed nips either, but I've seen some horrible victims in marathons. Ouch is an understatement.

Hey Benny "Toes" Dodge! Welcome to the blog! Yep, have that pad thingie. More like a sponge. Squish, Squish. LOL! Luckily I don't have the chafed nips either, but I've seen some horrible victims in marathons. Ouch is an understatement.

too funny! my son and i were shopping today at Vermont Country Store, and they have this stuff! I couldn't believe it when i saw this posting. I should have picked some up!!!

Hey Gene! That is funny! Well, now you know were to get some! LOL!

HA! This is great.

I have to say a couple of things: first of all pigs don't sweat, that's why they roll around in mud to keep cool, and secondly, chafing where the sun don't shine is not fun. I learned the hard way after a 16 miler to use body glide. Surrounded by many accomplished runners with no warning was not nice. Thanks for writing about this chafing problem and finding Monkey Butt Be Gone.

Before I started running I saw that stuff at a truck stop. I thought it was hilarious then. And it's hilarious now. (Apparently truckers get it from sitting all day.)

hahahah hehehehe... i'm so not mature enough for this. Monkey butt! Haha. I actually saw this stuff for the first time at a motorcycle show... and I laughed then too!

Hey Stephanie! Welcome to the blog! This is pretty funny. I laughed by butt off at first (no pun intended), but even funnier....it really works!