Are you a runner for which fuel sources like gels, Gu's and chews, just don't seem to do the trick. Do prepackaged fuel sources give you stomach distress or maybe you just don't like the taste or texture? Then check out my tips for alternative fuel sources. Some might be right in your cupboard!

Posted by RunnerDude at Friday, October 07, 2022 No comments: 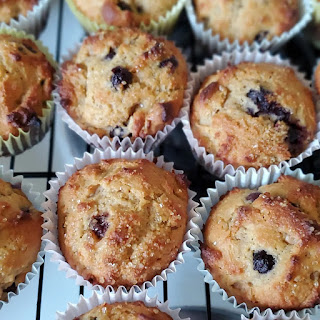 In a large mixing bowl, combine 1 ¾ cups of the flour with the baking powder, baking soda, salt and cinnamon. Mix them together with a whisk.

Combine the oil and honey in a medium bowl and beat together with a whisk. Next, beat in eggs. Then mix in  vanilla extract and yogurt .

Pour the wet ingredients into the dry and mix with a large spoon. A few lumps in the mixture is fine. Before adding the blueberries, place them in a bowl and sprinkle with the remaining 1 teaspoon of flour. This keeps the blueberries  from sinking to the bottom of the batter when baking.  Fold the flour-coated blueberries into the batter. The batter will be thick.

Cool muffins on a cooling rack.

Posted by RunnerDude at Friday, December 03, 2021 No comments: 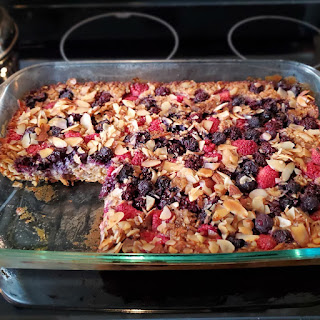 My running friend Cathy Jackson shared this simple to make Berry Baked Oatmeal recipe. It's the perfect breakfast or pre-run fueling for runners! 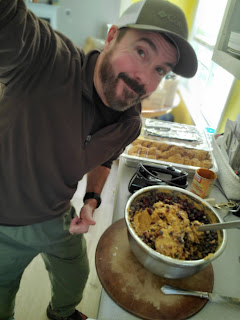 Looking for an easy cookie recipe for the holidays? This recipe is perfect. Full of fall flavors this cookie will satisfy that craving for pumpkin, chocolate, cranberries and pecans all in one bite! 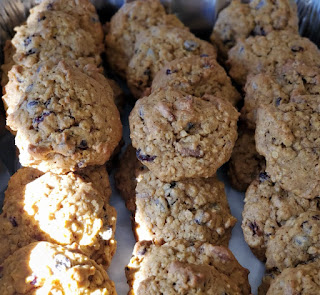 Step 5: Use a large cookie scoop (about 3 tablespoons) to drop approximately 8 scoops of dough per prepared baking sheets.

Step 6: Bake for 14 to 16 minutes or until cookies are firm and lightly browned. Cool on baking sheets for 5 minutes; remove to wire racks to cool completely.

Posted by RunnerDude at Sunday, November 28, 2021 No comments: 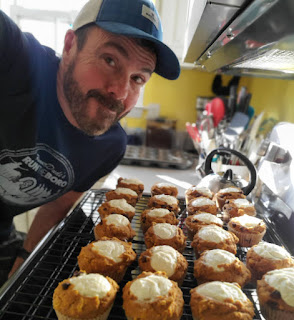 Pumpkin Spice! You can hardly get away from it from October-December. Here's an easy and healthy
recipe what will put all that hype to shame, giving you a very satisfying and healthy muffin that's easy to make and almost guilt free!

I discovered this recipe at Amy's Healthy Baking. The version reflected below incorporates an increased amount of Liquid Stevia recommended by Amy if you'd like a sweater muffin. Even with the increased amount, the muffins are not overly sweet making them great for breakfast, a snack, or pre-run fueling. My version also includes chocolate chips and walnuts. You can leave them out if desired.

They’ll keep for at least one week if stored in an airtight container in the refrigerator.

Preheat the oven to 350°F, and line a muffin tin with paper baking cups.

To prepare the filling, beat the Greek yogurt and cream cheese with a mixer until smooth and creamy. Add in the liquid stevia and vanilla. Beat until fully incorporated. Transfer to a zip-topped plastic bag.

To prepare the muffin batter, whisk together the flour, cinnamon, nutmeg, ginger, baking powder, baking soda, and salt in a medium bowl. In a separate bowl, whisk together the butter, egg whites, vanilla, and liquid stevia. Stir in the Greek yogurt, mixing until no large lumps remain. Stir in the pumpkin purée. Alternate between adding the flour mixture and milk, beginning and ending with the flour mixture, and stirring just until incorporated. (For best results, add the flour mixture in 3 equal parts.) Finally fold in the chocolate chips and walnuts.

Evenly divide the batter between the prepared muffin cups. Cut the corner off of the zip-topped bag with the filling, and pipe the filling into the center of each muffin cup’s batter. (It’s okay if the filling sticks up over the top of the batter. The batter will rise around its sides as it bakes.)

Bake at 350°F for 20-23 minutes or until the pumpkin parts of the tops feels firm to the touch and a toothpick inserted into the pumpkin part comes out clean. Cool in the muffin cups for 10 minutes before transferring to a wire rack.

Storage Tip: Cool the muffins completely, place a sheet of waxed paper inside  a 1-gallon size plastic zippered baggie. Place the muffins in the bag onto of the waxed paper, zip up the bag and place them in the refrigerator.  I've found that heating a muffin for 15-20 secs in the microwave is perfect! (May very base on the microwave and personal preference.)

Posted by RunnerDude at Sunday, November 28, 2021 No comments: 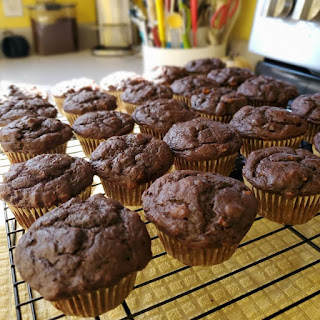 If you're like me, you're always looking for a healthy breakfast, snack and/or fueling ideas that are easy to make with readily available ingredients. If it has chocolate in it, that's even better!

I stumbled upon a recipe for "healthy chocolate peanut butter banana" muffins that looked pretty easy to make. I tried the original recipe and after a few batches, I tweaked it a bit making them even better for you!

The great thing about these muffins are you can make a batch or a double batch and freeze them. They freeze great in a zippered plastic baggie. Take one out when ready and heat it for about 30 secs. Because they are muffins, there's nothing to cut, no plate needed, and they transport easily for on-the-run eating.

Preheat the oven to 375°F and place a rack in the center of the oven. Line a muffin tray with muffin liners and set aside.

In a mixing bowl, mix together flour, cocoa powder, baking soda, baking powder and salt; set aside. (I sift all the dry ingredients together.)

Next, peel the bananas and place them into a separate bowl. Mash until no lumps remain. A pastry cutter works great for this.  (I use 3 1/2 bananas if they are small.)

Add the honey, egg, apple sauce, oil, and peanut butter, beat with a hand mixer until all the ingredients are well combined.

Fold the dry ingredients into the wet mixture. Then fold in the chocolate chips and walnuts. Make sure to avoid over-mixing.

Spoon the batter evenly into the muffin cups and bake for 20-22 minutes or until a toothpick inserted in the center comes out clean. Some days 20 mins is good. Some days 25 mins is good. Test them at 20 mins with the tooth pick. Cook a little longer if needed, but avoid overcooking as it dries them out.

Remove from the oven and let cool at room temperature.

Posted by RunnerDude at Wednesday, October 20, 2021 No comments:

Change is Hard, But Good 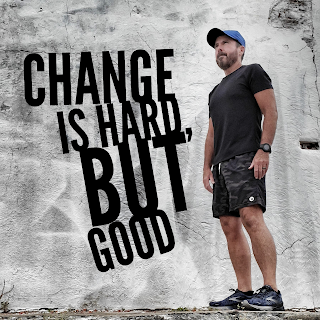 Even as an adult with my own kids, we had a pretty small family unit - my wife, our son, two daughters, and me. My in-laws weren't too far away. My parents were about 3.5 hours away. Close enough for a visit, but not on a weekly basis. We were a pretty tight family. We had friends, but mostly we had each other. When we moved to Greensboro in 1998, I was a solo runner, but eventually joined a group called the Blue Liners and developed a small tight network of running buddies.

In 2010, my experience with an extended family changed dramatically. That's when I opened RunnerDude's Fitness. My small group of running buddies were quick to support my venture and many were my first clients. Gradually, as I started having beginning running groups, race training programs, and personal training clients, a sense of family began to form. Clients were returning and bringing friends. It was kind of like suddenly having brothers, sisters, cousins, aunts, uncles, and grandparents. We all supported one another in our running and fitness ventures.

I soon realized, that this support was spilling out into our "outside of running lives." The running programs were bringing strangers together who otherwise would have never met. Best friends were forming. Some even found love. Yes, a few in the various groups have met, fell in love and gotten married. Entire families have come to programs and I've seen little ones grow in to awesome young adults. Sometimes I feel like "PapaDude."

The awesome thing about family is the support they show during the difficult times. Even way before the pandemic hit, RunnerDude's Fitness dealt with growing pains. Small groups were becoming large groups. Saturday runs of 10-12 were becoming 80-100. All good things. But, I have to admit, I struggled with not wanting to lose my personal connection with everyone. Some shared that they missed the smaller group. It weighed heavy on me. It's a challenge all small business owners deal with....how to grow and still retain all your original values and goals. At times you have to remind yourself you are a business and you're in the business not only because you love what you do, but also because you're providing for your family. Yet, still it's hard.

This is where my RunnerDude family has been so awesome. I can't tell you how many of my clients (some who have been with me since the start) have been like surrogate welcome wagons. They'll see new people and welcome them with open arms, introduce them to others in the group and help make them feel at home. That's what family is. Welcoming open arms. These same people are also often there offering to volunteer at programs and events throughout the year. They'll see a need and step right in. That's what family is all about.

Over that last year and a half, Covid-19 has really created quite a challenge for small businesses. RunnerDude's Fitness was shut down for 5 months and even when gyms and fitness centers were allowed to open, I still was not able to do much in my studio because of social distancing requirements. Races were non-existent and so income from race training was non-existent as well. My corporate fitness classes (a large part of RunnerDude's Fitness) were halted and so was that income. I eventually had to let the studio go.

But during all of that change, I had such strong client support. They supported me through participation in virtual fitness classes, purchasing own-their-own running and fitness plans, and more. They were also there when the outside gathering numbers slowly began to allow for outside training, boot camps, and running groups. Boot Camps outside in 25° F....now that's support!!  Not only were they there physically participating as much as they could, many were there emotionally, providing support by checking in to see how I was doing.

I can't thank the RunnerDude Family enough for begin there not only over the past year and a half, but over the past 11 years. Yes, change is hard, but good. The RunnerDude Family has helped me see the good in all of that change. While I don't know what the future will bring. I do know there are some pretty awesome people who will be in that future. Some I know and some I've yet to meet.

Posted by RunnerDude at Wednesday, June 23, 2021 No comments: