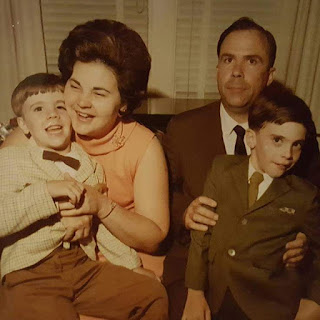 It’s been two years since my dad passed. He was, for the most part, a quiet man. Quiet and reserved unless he was in the pulpit or watching football on TV.  Dad had his everyday voice and then his pulpit voice. His sermons were not all fire and brimstone, but he’d definitely get animated and this deep bellowing voice would come out of him deep from somewhere. I remember he used that voice once when I was squirming around as a kid in the church pew during one Sunday service. I didn’t squirm much after that.

When I was in elementary school, we lived in a small community, Mt. Hermon, near Snow Camp, NC. My dad was the minister at the Methodist church. We lived in the parsonage, a small little house beside the church. Cow pasture in front of us. Cow pasture beside us. Silage patch in the woods behind us. The church on the other side of us. In case you’re wondering, silage is fermented moist fodder (in our case, corn I believe) stored in a pit dug in the ground and covered with a heavy black plastic tarp that can be fed to livestock. Man, in the heat of the summer, whew! The smell of the fermenting silage was horrid. I can still smell it up in my sinuses to this day!

It’s odd the smells you remember as a child. Among mine (some more pleasant than others), include the stench of fermenting silage in the heat of summer, cow dung in the fields beside us, the fresh smell of my grandmother’s (Mama Mac’s) pound cake, my grandfather’s (Papa Henry’s) oil paints, the Sir Walter Raleigh tobacco my other grandfather (Papa Mac) put in his pipe, the  pungent sweet smell of fallen rotten apples from the trees that lined our yard,  pop corn and non-filtered cigarettes at the little league games, magnolia blooms from my great Grandma Stewart’s yard, and Sunday after-church pot roast with carrots and potatoes.

Certain sounds stick with you as well. I remember the cows mooing in the fields around us, my grandmother (Mama Henry) who’d reply “Woooo!” whenever you’d be looking for her and call her name, the absolute nighttime quiet of living out in the “country”, and my dad cursing at the lawn mower. My dad rarely ever cursed, but when he did, it typically was at the lawn mower. Another rare time (other than when in the pulpit) when I’d hear that bellowing voice. That same bellowing voice would be conjured up during football viewing on TV too. During football season, I’d be tucked in my bed surrounded by stuffed animals waiting for the next, “Ref, are you Blind!” “Go! Go! Go!” “Get it together!” “Woohoo!” “WeeDoggie!” Hey wait. Weedoggie? Is that where I got that from? Hmmm…

It was hard to sleep during those nights. I was startled more than scared, never knowing when the next bellow was coming. Remember, it was a small house. Dad was like that at my brother’s baseball games too. Those poor refs. So, as a result I spent a lot of time during games at the concession stand. Now that I think of it, that may have been when I started gaining weight as a child.  I remember going off with kids I didn’t know, digging in the dirt, playing tag, climbing rocks, making and throwing dirt bombs, and I’m sure lots of other things I’ve blocked from my memory.

Times certainly have changed. I can’t image when my kids were young, letting them wander around with strange kids and just expecting them to be back by the end of the game. Of course, we didn’t wear seat belts, got left in the car in the summer at the grocery store (windows down), and 16-year-old high school students drove our school buses, too. Somehow we survived. A different time.

I do remember one eventful ball game when the game wasn’t the highlight. The featured entertainment was one of the ball player’s mom who started fussing at and whooping-up on her husband who had been cheating on her with another mom. It was like a live episode of All My Children. Yep, right in front of the bleachers and all the metal green and white woven fold-out lawn chairs. I remember it got dead quiet, except for the yelling mom. Everyone stood still, eating popcorn and staring. Kind of like an early Housewives of Alamance County. Another night, I remember my dad helping break up a fight between two other dads at the game who happened to be members of our church. Who says small town life is dull?

Sort of no big surprise that I never got into team sports. I did play two years of little league baseball and a year of midgets football. Did they really call the league midgets? It was the 70s. My brother was bitten by the team sports bug (baseball, football, basketball), but somehow I missed that bug. Maybe it was all the Avon Skin-So-Soft my mom put on me that she was told made good bug repellent.

Another thing I never got into as a kid was horror movies. My brother loved them. Of course we’re talking about the 70s. This was well before Jamie Lee Curtis, Jason and the Halloween movies of the 80s. He would beg my parents to let him stay up to watch whatever scary movie of the week was on TV. Cable didn’t exist back then, so these “scary” TV movies didn’t come on very often, but when they did, he wanted to stay up and watch it.  One time he bargained with my parents. He’d come home from school, take a nap, so he’d be able to stay up longer to watch the movie. It worked. Funny thing is that most of the time he stayed up, I did too (without the nap bargain). I was about three years younger and too scared to watch the movie, so I’d sit at the kitchen table reading the Sears catalog.

Our house had a family room and kitchen all in one, so the table was in eyesight of the TV. I remember peeking over to see the TV and when it would get too scary, I’d dive back into the toy section of the Sears Catalog. I spent a lot of time at that table with a catalog. Oddly enough, I can’t help but think I gained some early insight into concise text and layout design. Used those skills for 13 years as a writer/editor at a publishing company and still use those skills today owning my own business with developing promotional materials, creating and maintaining various websites, writing my blog, and my book.

Another thing that’s odd, yet funny too, is that while I was a bright kid, my reading was a little delayed. I could read and comprehend fine, but my reading ability was slow. In my mind I had to read every word and being a reflective kid. I’d get distracted by the words and content. So, while other kids would zip through a book, I’d still be on the first chapter. Today, I’d probably still be stuck in 2nd grade. Seems like today, they want kids reading in kindergarten. I actually got to play in kindergarten. Even took naps on those red and blue trifold mats. And yet again, somehow I survived. No Accelerated Reader, no Dibels, no end of year tests, don’t even think we took the CAT test back then. But here I am, a pretty functional adult….I think.

I use to stockpile books. I loved going to the library at school. One time my mom took me to the public library and I thought it was amazing. But because my reading was a bit labored, I never actually read many of the books I hoarded. Ironically the first novel I read completely from cover to cover was a horror novel in middle school. Yep, the kid reading the Sears catalog at the kitchen table to avoid the scary movie his brother was watching, picks a work of horror for his first book. Amityville Horror was my first read. No work of literary fiction, but the story line mesmerized me and I couldn’t put it down. Once I realized it didn’t matter how long it took to read a book, I became a ravenous reader.  And like anything, the more practice I got, the faster and better I got. The love or horror resurfaced as an adult during my Stephen King phase when I read all his early Bachman books as well as his classics like Pet Cemetery, Carrie, Cujo, Christine, etc. Then I had a Southern fiction phase. Yes, my reading is diverse. Clyde Edgerton’s Walking Across Egypt still makes me laugh when I think of the seat of the woven cane chair breaking, leaving poor elderly Mattie Rigsbee stuck, bottom hanging down, legs in the air. Love that book!

Reading really helped me as a teenager and young adult. It took me places I had never been. Taught me things I didn’t know. Expanded my horizons. As a kid and even today as an adult, I often felt like a fly on the wall looking down at what was going on instead of being immersed in the actual living of life. Books helped me experience life. Helped me gain confidence. I still hoard books. It’s really hard for me to part with a book once I’ve invested time with it. It’s like it’s become a part of me. Why would I want to discard it?

My father liked books too. Of course he had a ton of books on religion, but he also enjoyed western novels. He loved Louis L’amour books. He also was an avid reader of nonfiction-history, politics, religion, true crime. Guess I got my diverse reading from my dad.

Not sure why this is all on my mind, but it’s good to take time and reflect on the things that played a part in making you who you are today. Silage patches to horror novels. Not sure what that says about me, but I’ll take it.

Posted by RunnerDude at Tuesday, January 29, 2019 No comments:

One More Chance To Join the RunnerDude's 1000 Mile Club! Awesome news! Junction311 Endurance Sports has partnered with RunnerDude's Fitness and will be providing special RunnerDude's 1000 Mile Club medals to all members reaching their 1000 miles during 2019! WeeDoggie! So, all club members get the t-shirt and magnet and those reaching their 1000 miles now will receive this awesome medal! And don't forget, those runners that reach 1500 miles will receive a mystery bonus! (Actual medal design may vary.) I've extended registration until Feb 3rd (my birthday!). For more info and/or to register go to http://runnerdudesfitness.com/runnerdude-1000-mile-club/ 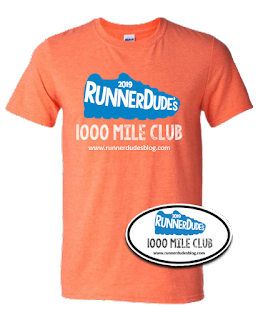 Posted by RunnerDude at Wednesday, January 23, 2019 No comments: