When Do I Run At Race Pace? 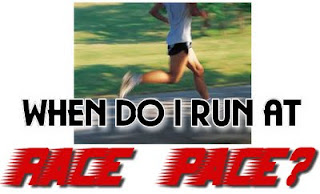 As summer draws to a close, many runners are in the heat of their fall marathon race training. Cooler temps and decreasing humidity are being celebrated. The tempo runs, intervals, and hill workouts are in full swing, and the really long runs have begun.

Many training plans have runners running short-n-easy, long-n-slow, and hard-n-fast. The shorter easy runs keep the weekly mileage base strong. The slow long runs build endurance as you acclimate to longer and longer distances. The speed work builds power, increases VO2Max and pushes out that lactate threshold.

So begs the question, “When do I get to run at race pace?”  There are some great opportunities to let you body experience race pace running throughout your training.  Here are a couple of options:
Weekly Tempo Run: I have my runners run a weekly tempo run. They begin at 4 miles and every three weeks increase the distance by one mile. For the three weeks at a particular distance, they do three different types of tempo runs—traditional tempo, tempo intervals, and a race-pace tempo. Each type begins and ends with a 1-mile easy warm-up/cool-down. The miles in between are run at the specified tempo pace. A traditional tempo pace is run 30seconds slower than 5K race pace. Tempo intervals rotate between 5-minutes fast (20 secs slower than 5K race pace) and 5-minutes slow (about 30 seconds slower than marathon race pace). The race-pace tempo is run at marathon race pace. So, during their 18-week training, they experience three different types tempo runs at 4, 5, 6, 7, and 8 miles before they begin to taper down the last three weeks. These longer race-pace tempo runs are great for helping you guage your race-pace speed.
The Long Run: Traditionally the long run is run about 1-minute slower than marathon race pace. The long run slow pace.....
To read the rest of my race-pace running tips go to Active.com.
Posted by RunnerDude at Thursday, September 15, 2011 1 comment:

Below is the first of a series of upcoming posts on "My First Marathon." It's such an awesome experience, I thought it would be great for readers to share what their first marathon was like and why it meant so much to them. The first in the series is from Vanessa Taylor. Read on to find out more about Vanessa and her first marathon: SunTrust Marathon, Washington DC, 2009
I had started running for real in Fall 2008, when I started a graduate program in Washington DC.  I had always wanted to do a marathon, and that seemed like a good time to do it.  I went through a rookie program training plan that I found online, trained all winter, was hoped for the best.  It was my goal to break 4 hours, although I had started to wonder of the likelihood of that.

It was about 30 out when the gun went off at 7AM, but I warmed up within a few miles. I was able to see my parents at the starting line, which was great. The first few miles went by quickly, although when I ran my first mile in 9:30 (21 seconds off my pace), I picked things up, nervous that I wouldn't meet my goal. My ideal goal was to break 4 hours (and I had secondary goals of 4:10 and 4:15). For the first 6-7 miles, I ran alongside of a nice guy named Rich, who was also trying to break 4 hours. However, at mile 7, my right sock rolled under my ankle, and I had to pull over to fix it. I was so concerned about the time I lost fixing my sock, that I picked up the pace again.

The majority of the hills were between miles 3 and 9, and it felt great to knock them out. The crowds were great; everyone was cheering, playing music (including the Rocky theme), and just being very supportive. I saw my parents at mile 11, and I was so happy to see them. Around that point, I think I misread my pace band, and thought I was 4 minutes off of my pace. However, when I got to the halfway point (13.1) in under 2 hours, I then realized, not only had I made a mistake in reading my pace band, but that I could truly break 4 hours with some room to spare. Also, I knew I was halfway done, which was good. Then I was also able to see my mom and dad again at mile 15, which was great.

The next few miles flew by, especially mile 17, which went downhill (weee!). At mile 18, I realized I only had 8 miles to go, which did not seem that bad. I knew that my friends from grad school (Wes, Seth, and Mary - the 3 I talk about the most) were going to be standing at mile 20. I told them to come around 10AM, but thankfully they got there early, since I was running at a pace faster than I imagined. I saw them first, and yelled out, and they were so surprised to see me, it was hilarious. I was so happy to see them. Then at mile 21, things started to seem a bit ugly. 5 miles left, but I just started to feel icky. It's not even that my legs were hurting, it was that I had been drinking Powerade and eating GU, and just had a sickening sweet taste in my mouth. Mile 22 was an "out and back" mile, which meant I ran half a mile, then turned and ran back on the other side of the road. It felt like I was going nowhere. Then I had 4, then 3.

At 3 (23), I told myself there was only a 5k left, and that I would be done with it soon. Then 2 miles left, but 2 hills to climb. Those 2 hills wouldn't have been so bad had they been earlier, but they seemed terrible then. Then the mile sign said 25, so just 1.2 to go. That felt long. Finally, I passed the sign that said 26, so all I had was a 200 yard dash. I dug in, found the last bit of energy I had stored, and sprinted to the finish. They announced my name as I went through the finish line, which was pretty cool, and I saw my friends and parents as I was finishing. The time that showed up as I crossed the finish line was 3:55:47, but I knew it was actually less than that, since it took me a few minutes to even cross the starting line. I then got my medal, and was immediately surrounded by Mom, Dad, Mary, Seth, and Wes. It was amazing, lots of hugging, etc.. I was insanely happy (I'm sure the adrenaline played a role in that). Once I slowed down, I started to feel sore, so I walked around, stretched, and even got a free massage on location, which was great.

Later in the day (following a good shower and nap), I went out for a steak dinner with my parents and friends - so good. It was just great for my parents to meet my new friends, and everyone just had a great time.

I did not expect to finish in that time - I was shocked. In the weeks leading up to the race, I was filled with a lot of doubt about my goal, and in the end, I beat myself. 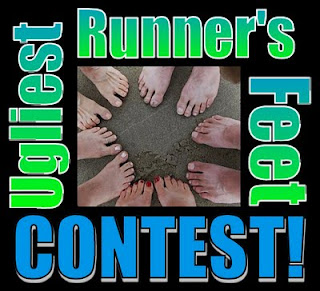 You know you're a real runner when your first toenail turns black or better yet falls off. LOL! I have one toenail that's a permanent honorarium to my first Marathon (NYC '97) Still an odd looking little booger, but each time I clip it, I have fond memories of that first exhilarating day. (Okay, I know...I need to get out more.)
To celebrate the beauty that only a runner can love, RunnerDude's Blog is sponsoring The Ugliest Runner's Feet Contest! To enter, send RunnerDude a jpeg photo of your feet in all their glory to runnerdudeblog@yahoo.com. Be sure to put "Ugly Feet" in the subject line and then put your full name, location, and a little blurb about you and your "ugly feet" in the body of the email. You'll have until Friday, September 30th to submit your photo/entry. Then the first full week of October, all the entries will be posted for readers to view and vote on. Details on how to vote will be posted along with the photos. So, what are you waiting for, make a Kodak moment with your tootsies and send it in!
Oh yea! The winner gets a $75 gift card to RunningWarehouse.com! Hopefully he/she will buy better fitting shoes with the prize money. ;-)
To read more about Black Toe a common foot ailment for runners click here.
Posted by RunnerDude at Thursday, September 01, 2011 9 comments: