Running Bad for You? Oh Pshaw! 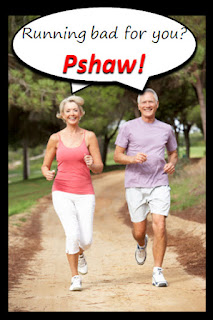 As a runner you hear it all the time when you tell non-runners about your passion. "Oh, isn't running bad for you? Or, "I'd run, but it's bad for your knees." More often than naught, these individuals are overweight and I find it ironic how it doesn't occur to them, that maybe the extra weight they are carrying is probably far worse for the knees than running?

I think once the phrases "low impact" and "high impact" became integrated into our vocabulary, people jumped at the chance to use them as excuses for why not to do exercise, particularly running. "Running is 'high impact' so I'd better just walk. Not that walking is bad, it's a great form of exercise. But, I feel much of the general public too quickly discounts running, because they think it's bad for you.

In reality, I think many of the sedentary naysayers are probably more intimidated by exercise rather than being scared that running will actually hurt them. I respect that. Getting into exercise after years of a sedentary lifestyle can be very intimidating. The key, however, is just starting. Whether it's running, Pilate's, yoga, walking, group exercise, swimming, or square dancing, just get out there and do it. Start slow, build your fitness gradually. The number one mistake newbies-to-exercise make is taking an all-or-nothing approach. With fitness that's setting yourself up for defeat before the game even starts.

It takes the body about 4-6 weeks to acclimate to new intensities no matter what the fitness level. Even if an Olympic weight lifter mixes it up and puts different intensities on his body, he'll feel it. Your fitness level will actually dip initially after starting your new exercise as your body acclimates to the new demands put upon it. That dip is called the gain threshold. But, if you hang in there you'll pull out of that dip and be stronger than when you started. Depending on the individual, that can take 4-6 weeks. Many individuals become discouraged and quit at week two or three because they don't realize that it will get better.

Now back to running and whether or not it's bad for you. Like anything, too much of a good thing can be bad. 100-mile weeks probably isn't a good thing for the general population. However, moderate running on a regular basis has proven to be very beneficial. It can even add years to your life. Yep, years.

I recently read in HealthDay about a Danish study, headed by Peter Schnohr, chief cardiologist of the long-term Copenhagen city Heart Study. Schnohr stated, "We can say with certainty that regular jogging increases longevity. The study began in 1976. Researches compared the mortality of joggers and non-joggers ages 20-93 (about 20,000 participated in the study)

The 35-year study found that 10,158 non-joggers and 122 joggers died. That's a 44% decline in the risk of death for joggers male and female. Male joggers can extend their lives by 6.2 years and female joggers by 5.6 years. The researches concluded that jogging at a slow pace for 1 to 2.5 hours weekly was the most beneficial.

So what's so magical about jogging? The researchers believe that jogging...


Other studies show even more benefits of running...


Well, gosh, I think all that data should hush the naysayers. What are you waiting for? Go for a run!
Posted by RunnerDude at Sunday, May 06, 2012 2 comments: 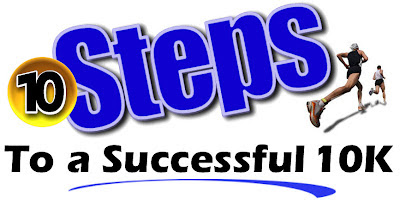 Harder to find these days, but a fun distance to run, the 10K can be a great bridge between a 5K and a half marathon. The 10K is twice as long as a 5K, but in may respects it's a more enjoyable race. Instead of shifting immediately into 5th gear from the starter pistol, the 10K allows for a little more time to get in your groove.
While the 10K pace may be a little toned down from the 5K, it's still moving at a pretty good clip and for twice the distance. Speed training is a component of 10K training, but endurance-training is really the key to a successful 10K. Working to maintain your speed over a longer distance is now your primary focus.
Listed below are several tips to help you achieve great results with your next 10K.

2. Train with a buddy or group.

One of the best ways to succeed with 10K training is to ensure your accountability. Training with a buddy or joining a 10K training group helps hold you accountable for the weekly workouts. Knowing you'll be missed goes a long way in making sure you get to each session. The encouragement of others can really help you through the tough portions of training.

Do your homework. Not all 10K running plans are meant for all runners. If you're a beginner, look for a 12 to 14 week plan. Intermediate and advanced runners will do fine with a 10 to 12 week plan. Also, look at the total weekly mileage. Beginners, your weekly mileage should be in the upper teens to low 20s. Intermediate runners, your total weekly mileage should be in the mid 20s. Advanced runners, your mileage may reach into the 30s. More miles are not necessarily better. Quality runs such as hills, intervals, and tempo runs may not rack-up the mileage, but the conditioning they provide trumps lots of long steady-state miles.

Don't run all your runs fast. Because a 10K is only 6.2 miles, many runners (especially intermediate and advanced runners) find themselves running all their runs at or close to race pace. A plan with varied-paced runs will help to improve endurance—both aerobic and muscular. It will also help to increase your pace. Runners that run fast with every run thinking they'll eventually get faster often find they stagnate or hit a wall with their speed and can't get any faster. A weekly regimen of short easy runs, speed work (hills and/or intervals), a tempo run and a slow long run will help to increase pace as well as better prepare you overall for race day as well as keep your injury free.

It may seem odd to have "long runs" in a 10K training plan, but they are key in helping to improve your aerobic glycogen metabolism (energy making). Increasing your longest runs through the duration of the training program to mileage longer than the race length will help tremendously in making your energy production more efficient. If you're a beginner, having your longest run go to 7 miles will suffice. Intermediate runners can take their longest long run to 9 miles and the advanced runner can run his/her longest long run up to 12 miles.
Remember that a long run is an easy slow run. These runs are designed to increase distance endurance. Most of your long runs should be run about 1-minute slower than your 10K race pace. In the second half of your training, it's good mentally and physically to start picking up the pace to your 10K race pace during the last couple of miles of your long runs. This teaches your body and your brain that you have the ability to "pick-it-up" later in the run.
Click Here to Read Steps 6-10 at Active.com.
Posted by RunnerDude at Wednesday, May 02, 2012 2 comments: