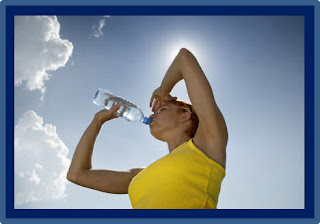 We often focus on hydration during training for a marathon, but then for some reason, sometimes that focus gets thrown out the window at race time! Listen to RunnerDude...Don't Do That!

Hydration can make or break a race for a runner. You can be carbed-up to the max, have trained your body to better utilize its fat stores, and have increased your endurance 10-fold, but if you get dehydrated during a race, it may spell DISASTER for you.

Here are a few things to keep in mind to make sure you're well hydrated before, during, and after the marathon.

1. Find out what sports drink will be provided during the race. If you're able, train using the same sports drink provided by the marathon. If your system doesn't tolerate the featured race drink or you'd just prefer to use something different, be sure to plan out how you'll carry or have access to your preferred hydration source. Some options include, wearing a hydration belt or stakeout family members or friends along the course ready to hand you your preferred fluids.

2. Never use the featured sports drink in a Marathon, if you did not use it in your training. Don't Do It! This will often cause stomach issues. The many different brands of sports drinks available contain varying amounts of carbs and electrolytes. Some contain other components such as protein. If you've not tried these products during training, you don't want to risk causing stomach issues on race day.

3. Don't over hydrate. Throughout the day before the race, drink water when you are thirsty, but don't overdo it. Drinking a half a cup to a cup (4-8 oz) each hour works well. Remember, you'll still be carb-loading on this day. Make sure some of your carb intake includes salty simple carbs like pretzels. Also eat a banana or two for the potassium. This will help ensure that you're not flushing out your precious electrolytes that you'll need during the race. Do not drink alcohol the day before the race. This can dehydrate you.

4. Drink 16oz of water 2 hrs before race time. This will provide enough time for the water to pass through your system and the excess be voided well before the start.

5. During the race, drink 6-12oz every 15-20 minutes. Don't rely on the Thirst Mechanism during a race. By the time you are thirsty you are probably already dehydrated. When you are severely dehydrated, you may not even experience thirst. Water works fine the first 45-minutes of the run, but after that sports drinks should be used to help restock the body's glycogen stores as well as replace electrolytes that are being sweated out. Whether you drink water the first 45 minutes and then use sports drinks or you use sports drinks the entire race, make sure it's what you did during your training. Don't vary on race day!

6. Rehydrate after the race. Do a "Sweat Test" a couple of times during your training. Simply weigh yourself (in the buff) before a long run. Do the run. Weigh yourself again (in the buff) immediately after the run. The weight loss incurred is the amount of water you sweated out. For each pound lost, drink 16oz of sports drink. Drinking sports drink will help replace the lost carbs and restock your depleted glycogen stores as well as replace lost electrolytes. This will help ensure a better and quicker recovery. It's important to remove your clothes before weighing especially after the run. If you sweat heavily, your wet clothes could be adding weight which will keep you from getting an accurate post-race weight loss total. Doing the Sweat Test a time or two during your training will give you a good idea as to how much you'll need to drink to rehydrate after a race, since you probably won't have access to any scales until quite a while after the race.
Posted by RunnerDude at Thursday, August 27, 2009

Great tips! I am unnerved by the sound of water sloshing in my tummy when I race. Any tips for that?

I never even thought about drinking the featured drink beforehand! Luckily I have never had problems, but I will be definitely implementing this into my training!

Hey Kathleen! Welcome to the blog!! Not always, but often that sloshing sound is do to your sodium levels being low. You need sodium in your system to help wiht the absorbtion of the fluids you're taking in. So, it could be that you need to make sure you're eating some salty food like pretzels the day before the race as well as making sure your sports drink or sports drink has sodium in it. This is especially ture on a hot day when you're sweating a lot. Hope this helps!

Hey onelittletrigirl! Yep, I had a bad experience during one race. I knew better, but I ran out of my sports drink I was carrying and I felt like I needed more than jus water so I partook of the race feature drink. I took me for a loop. Learned from that mistake.

this is the second time this week I've heard about weighing yourself before and after a long run. I have an 11.5 miler scheduled this weekend so I'm going to test it then.

Hey Molly! It really is surprising when you do it to see how much weight you loose due to sweat after a run, especially in the heat. Helps you gauge how much fluid you need to replace.

Are there any sports drinks you recommend or have had success with? I typically run with just water and GU or Cliff Shots.

These are great tips. For me, especially the day before the race suggestion. I usually try to be sure I'm drinking enough fluids for the whole week before, overkill?

will definitely be revisiting this post before race day.

Hey Fat Guy Running! You may be just fine with what you're doing. You're getting the carbs from the GU and Cliff Shots. The only thing you may want to check is to see if those also contain electrolytes. I believe GU's new Roctane Gels do. As far as sports drinks go...everyone is different and everyone's body reacts differently. I for example have to use ones that don't contain quite as much simple carbs (sugar). I've used Accelerade and it does well with my system. It also contains a little protein to aid in recovery. I've also recently been using ZICO which is 100% coconut water (not milk). It naturally contains the carbs and electrolytes you need. It also contains about 15 times more potassium than the average sports drink which helps prevent the calf cramps I frequently get. Hope this helps!

Hey Regina! The key is just not to over hydrate. Drinking throughout the day during the week before the race is probably fine, but don't do more than the recommended daily amount. The main reason is you don't want to flushout all the electrolytes from your system (sodium and potassium and a few other things). So, if you're just making sure your drinking frequently during the day and you're not trying to drinks jugs and jugs a day, you're probably fine.

One rule of thumb I always adhere to is NEVER use the featured sports drink at a race. Why? Because the drink is normally delivered in powder form and volunteers have to mix it. I have been in one too many races where they didn't get the water to powder ratio correct - including one where I was throwing up a quarter mile later because it was so strong.

Hey Jamoosh! Excellent point!! I have been in some races where the sports drink had been watered down so much it might have well been water and hen I've had some that was so tart I could hardly drink it. So, Runners be ware!

Great post with excellent tips! Thanks! I definitely was OVER hydrated on one of my races this year and I felt terrible! :( Yeah, the sloshing water is awful.

Hey Zoë! I've not suffered from overhydration but I have from dehydration and I hear it can be just as bad. Thanks for reading!

Thanks Runner Dude! I've been wondering how to tackle hydration before the marathon. You always have great posts right when I need them!!!

I can seem to rehyrate after a race. I drank 4 oz of sports drink 30 minutes before the race and then another 12 oz afterwards, and then constantly drank water after that. I still got a dehydration headache. Any tips for before or after the race?

Hey SuperBK! Welcome to the blog! Your dehydration problem could be due to a variety of things. Did you hydrate well the day before the race? Did you drink 16oz of water or sports drink 2hrs before the start? During the race were you drinking 6-12oz ever 15-20 minutes? Afterwards, did you drink 16oz of water or sports drink for every pound that you lost during the race? Depending on the race distance and the temperature during the race you can lose several pounds from shear sweat. If you don't replace what you lost during the run you can still be dehydrated even if you've drunk a glass or two of water. It's best to hydrate after the race with sports drinks because it helps replace vital electrolytes. Also, if your race is more than 45 minutes long (like a half marathon or full marathon) then you need to be drinking a sports drink after the initial 45 minutes. The reason is that after 45 minutes you'll be losing vital electrolytes (sodium, potassium, etc.). If you flush out all the sodium in your system from just drinking water during the race, then your body has a harder time absorbing the water you're drinking. The sodium helps with that absorption. Ever get that sloshing sound in your stomach during a race after you've drunk some water? That's usually due to the water remaining in your stomach instead of being absorbed because of the lack of sodium in the system. Know I've thrown out a ton of different possibilities, but hopefully one of more of these suggestions will help out on your next race/run.