Today I had a great 18-mile run. Okay, that's a lie. I felt like I was gonna die around mile 14. What was great, however, was that I was running with friends—Dena, Josh, Royce, Jack, Marshall, and Neal who all motivate me to keep on going in lots of different ways.

I ended up running most of the 18-miler with Dena and Josh. Dena's in our group of runners that's using the FIRST marathon training method. We run our weekly interval and tempo runs together and often the long run. Dena's a wonderful writer and has helped me tremendously with my writing, the blog, and exploring different writing avenues. I met Josh for the first time today. He's a friend of Dena's and a really cool guy.

It wasn't Dena's and Josh's verbal motivation that spurred me on. Instead, it was motivation by example. I'm supposed to be the "faster runner," but today I was feeling fatigued from the get-go. I'm already behind on my marathon training, so I hauled myself out of bed and got myself going.

I started out fine, and felt pretty good until we stopped around mile 10 for water. I kept telling myself that when we got to the next turn-off (which was a 2-mile out/back stretch) that I'd just keep going straight along the greenway back to the start and cut off those 2 miles. But Dena and Josh were running so strong, so I kept going. Dena was really bookin-it today and Josh, well Josh was running the 18-mile route barefoot! He did slip-on a pair of Vibram Five Finger shoes once or twice at some gravel and trail sections, but other that it was barefoot all the way!

I kept telling myself that if Dena can be running so strong and be 5 to 10 minutes faster than pace and Josh can run barefoot, then I can complete the 18 miles. And so, I did. Actually we ran 18.14 miles!

Afterwards, we headed for bagels and coffee. I ended up meeting several readers of the blog while enjoying my egg-and-cheese bagel. It was great hearing t 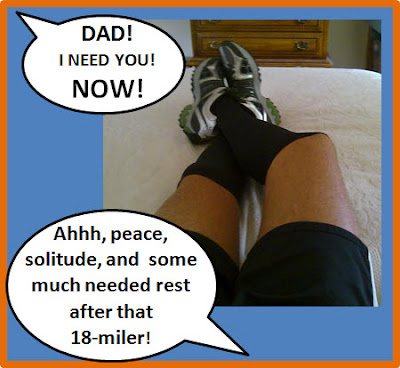 hem talk about the blog. I greatly appreciate their support!

Right now I'm whaled up on my bed, watching the IAAF World Track event in Berlin on TV while wearing my CEP compression socks. My kids are laughing at me, but I really don't care. I got in my long run, accomplished my goal, spent time with friends, and met some new friends. All is good.

Running with a friend has truly improved my running, without a doubt. I think with a training plan, we limit ourselves to the paces we put on the chart. Running with a friend, especially one who is faster, forces you to push yourself because you want to be just as good as the other guy (and you don't want to be a weenie). It's good to step out of the box and do something you don't think you can do. At the end of the day, you did it and you feel amazing. Great job on the run!

Hey Tammy! I totally agree...nobody wants to be a weenie. LOL! You are right on the money. Running with someone faster it a great way to improve your running. I credit several of my running buddies for making me faster.

That's great that you have running friends! I don't know too many local runners yet, so I have to live vicariously through my online buddies, and update to them when I get back from my run :) I need to get a pair of compression socks, my calves are killing me after today's 14 miles!

Hey Heather! I recommend both - running friends and the compression socks. After a long hard run they're great! Many people run in them. I use them for recovery. After a really hard run like today, I'll even put them on at nite and sleep in them. Really speeds up recovery.

Thad's more hardcore than he lets on. When I'm suffering, EVERYONE knows it. Whine, whine, complain. =) Thad made one neutral, "My legs are a little tight" remark and that was it. And never looked like he was hurting.

Running with friends is a huge motivator for me! Knowing you and Josh were there really kept me on pace and pulled me through those last 5 miles. It was a great run. Thanks!

"On pace?" Weren't you something like ten seconds a minute faster than your goal? Don't listen to Dena, folks. She was blatantly trying to kill me and Thad. Running our hooves off, she was.

Hey Dena! You're too kind. I agree with Josh...you were a regular She-ra out there!

The picture at the end cracks me up!! My kids are a year and a half and almost 4...they have no concept of rest after a long run.

Great run and way to tackle the internal doubt..

FYI NUUN Giveaway on my Blog if you are interested...

Hey Mel! I hate to tell you but my kids are 8, 13, and 17 and it doesn't get any better...with rest time that is. LOL!!
Everybody check out Mel's NUUN giveaway on her blog!
http://tallmomontherun.blogspot.com/

Thad: I saw some of your group this morning. I noticed the Zola Budd of your group, Josh, when a group went behind the Bur-Mil outdoor center/water fountain, heading out toward Strawberry Road. Then when Liz Lindsay introduced me to a few of her Janes stopping for water and gels, one asked, "Are you RunnerDude?"

Hey Eddie! Yep that was us behind Bur-Mill. That's funny about the "Janes" asking if you were RunnerDude. I'm flattered. Meeting with Josh later in the week to get more info on his barefoot running for a blog post. Should be good.

Sounds like running with a friend is a good idea.

Compression socks are the bomb...kids hate them and the aren't cheap but the do the trick!

Hey SchoolKidRunna23! It especially great to have a buddy on a long run. Helps the run go by quicker and if you're feeling less than stellar, having a buddy can really help you through it.

Great story - wish I had some partners to get me through my 15 tomorrow. Unfortunately, the dog will have to stay home due to the forecasted heat. Way to stick it out today!

Hey Pete! Thanks man. I'll be thinking about you on your run tomorrow and send good vibes your way. Make sure you hydrate!!

I have a dream that someday I will have a running buddy. Until then, my two little girls are great companions when I can talk myself into pushing the double jogger.

Great job on the run! Tell me more about your compression socks. I have a pair of Recovery Socks but want to find out what other options are out there and how they compare.

Agree whole hartedly!! I run faster and push myself harder running with friends. Way to hammer out that 18.14 (the .14 matters!!!)

Hey Candice! I bet those two little girls make super runnin companions! Go Mom Go!
I've not used the Recovery brand of compression socks. The CEP Socks people contacted me a while back about reviewing their socks on the blog. I did and fell in love with them. I had a pulled calf muscle about 2 months ago and I was able to recover form that really quickly compared to other times that's happened. I credit it to the CEP Socks. I wore the the rest of the day I pulled the muscle and then I slept in them for a week. I was back pounding the pavement in not time. You can check them out at their website. http://www.cepsocks.com/welcome-google-user.html?&gclid=CIXHuOPkqJwCFRyenAodf0IClA