Five Ways to Stay Motivated During the Winter

(Guest Post by Joseph Havey and the Ninja Challenge) 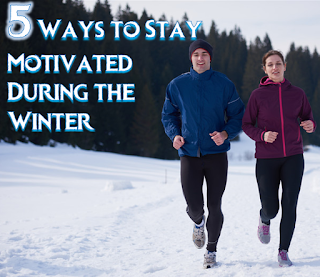 It’s been a few weeks since New Year’s. The holidays are far behind us, and the summer is far ahead. If you feel like you’re in a “no-man’s-land” of motivation, you’re not alone.

Motivation to keep New Year’s resolutions often wanes after two weeks, and only eight percent of people actually accomplish their goals for the year, according to statistics. But there’s no reason you can’t be among those eight percent!

Listed below, are five ways that you can get back on track.

1. Surround yourself with the right crew:
You’re probably tired of the phrase “you’re the average of your five closest friends,” but it bears repeating because it’s so true. As science shows us, your friends have the largest impact on your actions, both negative and positive. Sometimes, they can impact your behavior more than your own spouse! We’re not telling you that you need to get rid of your “unmotivated” friends. Instead, try and find a new crew. Join a running club. Start a workout group at the office. Instead of meeting a friend for coffee, try meeting a friend for a walk. As the science shows, it’s much easier to make a positive change when everyone around you is doing the same thing. We all have at least one friend that is basically a “walking pep talk.” Get to know him or her better today.

2. Focus on the positive. Not the negative:
Have you ever tried to swear off “bad food” and quickly realized that chocolate, candy, chips and soda suddenly consumed your entire thought process? Or maybe, you threatened yourself with some type of punishment as a way to motivate yourself to workout (“If I don’t go for a run, I’m going to pay my friend $5…”) As it turns out, this doesn’t motivate people at all. In fact, it’s demotivating.

Miss a workout? Binge on chocolate cake? Skip an entire week of dieting and heading to the gym? Don’t worry about it. The worst thing you can do is fret over the mistakes you’ve already made. Instead, focus on the chance to make today better than yesterday. Think about how much fun you’ll have with your new running group. Think about how good you’ll feel after taking that workout class. Or about how yummy those roasted vegetables are going to taste! Focusing on the positive results of your goals is always more motivating that worrying about avoiding the negative consequences.

3. Reduce the size of your goals:
If you’re struggling with motivation, it may be because you haven’t seen much progress toward your goals. That could be a sign that your goal is either too big, too vague, or too complicated. We’re hardwired to avoid pain and uncertainty, so a vague goal is scary to our survival instincts.

Instead of focusing on trying to lose a large amount of weight or radically altering your diet, break it down. Write down every single step it will take to get to your goal, and complete one at a time. For example, if your goal is to “Start Running,” write out a plan that starts includes walking 30 minutes a day during lunch, finding a running group, buying running shoes, finding a local race (like the Ninja Challenge!), forming a weekly workout plan, etc. Make the steps super specific and knock them out one by one! Don’t worry about the end goal. Instead, focus on accomplishing each small step along the way.

4. Write everything down. Both before and after.
Many of us have our goals in mind, but few of us have them on a piece of paper. Believe it or not, putting your goals in ink is one of the fastest ways to boost motivation. But don’t stop there. According to research, you also should track your progress.

If you wrote out your goals last month, that’s great! You’re a step ahead. Now, it’s up to you to track your progress. You can do it daily, or even weekly, but you need to keep checking back to see how you did. Otherwise, you’re left with a vague and uncertain task, which we’ve already said is actually demotivating.

5. Treat failure as part of the process toward success.
The science surrounding failure is a little bit new, but it’s incredibly fascinating. Some of the most successful people in the world think about failure differently than most of us. In fact, instead of avoiding failure, they actually treat it as part of the process toward success. And science is finding that they are definitely onto something.

Successful businessmen -- ranging from Steve Jobs to Bill Gates -- have often bragged about having failed on their way to success. And as studies have shown, failure actually makes you more productive in the long run. It’s little wonder, then, why you shouldn’t fear failure. Instead, you should pursue it! Stop trying to have the perfect day, perfect workout, perfect diet, or perfect plan. Take joy in knowing that if you messed up, you’re actually closer to your success than before.

If you’re struggling with the motivation to keep your New Year’s resolutions, we hope the tips above can help. There’s nothing to be ashamed of if you fell off the wagon -- we all do sometimes.

To get back on track you should start small, write everything down, find some motivating friends, and expect to fail a few more times. This process repeats itself over and over, and before you know it, you’re well on your way to success! 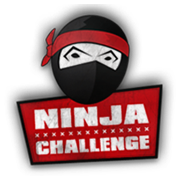 About the Ninja Challenge: The Ninja Challenge Obstacle 5K is designed to bring out your inner www.theninjachallenge.com.
ninja through obstacles that include climbing walls, throwing ninja stars, running on water, dodging ninjas, and more. This family-friendly event is held every year in Fuquay-Varina, and is locally-owned and supported. It’s perfect for first-time racers of all age ranges, and we often have competitors ranging from 8 to 80 years old. A portion of all proceeds benefit the Triangle Aquatic Center and the Triangle Red Cross to help promote drowning prevention and safety. The 2016 Ninja Challenge Obstacle 5K will be held in Raleigh, NC on May 21, 2016. To register, please visit www.theninjachallenge.com.

Complete the raffle below for a chance to win a free race entry to the Ninja Challenge, The raffle ends on Feb. 24th and the winner will be announced on the blog on Feb 25th.

a Rafflecopter giveaway
Posted by RunnerDude at Tuesday, February 16, 2016 No comments: 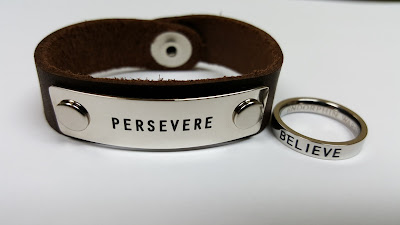 If you know anything about me and my coaching style, I'm all about motivation. I encourage my runners to discover that inward motivation and inspiration to keep them on track and training hard. Sometimes, however, it's great to have an outward reminder,especially when things get tough or when you've hit a training slump or if you're out due to an injury. That's where Endorphin Warrior comes in handy. This awesome company makes unique motivational and inspirational jewelry (and now t-shirts, hats and key rings). I began my relationship with Endorphin Warrior in 2010 when I first opened RunnerDude's Fitness. They too were a new company having just started in 2009. 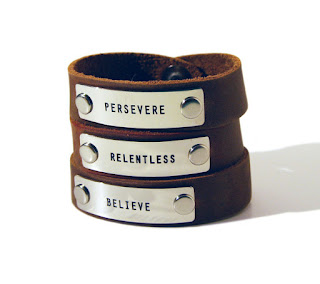 Endorphin Warrior is best known for its leather Warrior Training Bracelets. This unique bracelet is comprised of a nickel-plated metal tag riveted to a 5/8th"-wide natural-leather wristband. It has a snap closure for easy on and off. The minimal design is perfect for men and women. The metal plate is engraved with one word...a very powerful motivating word. You can select from several of these words and choose one that will motivate and inspire you the most--Persevere, Unbreakable, Strength, Believe, Relentless, Conquer, Unstoppable, Fearless, Focus, Transcend, Limitless, Positive, Courage, Consistency, Breathe, Warrior, 13.1, 26.2, Swim...Bike...Run, 70.3, 140.6, As I Run, As I Walk and As I Dance. 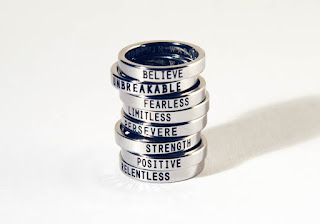 Endorphin Warrior has quite a variety of motivating and inspiring sterling silver sports jewelry too. Be sure to check out all of their unique products at www.endorphinwarrior.com. Eric has given me a speical discount code for my blog readers!! Use code: RunnerDude15 and save 15% off your purchase!! The code is good through 9/30/16.

To enter for a chance to a Warrior Training Bracelet or Warrior Training Ring, be sure to complete the entry options below. The drawing will end on Feb 19th and the winner will be announced on the blog February 20th.


a Rafflecopter giveaway
Posted by RunnerDude at Friday, February 12, 2016 No comments: