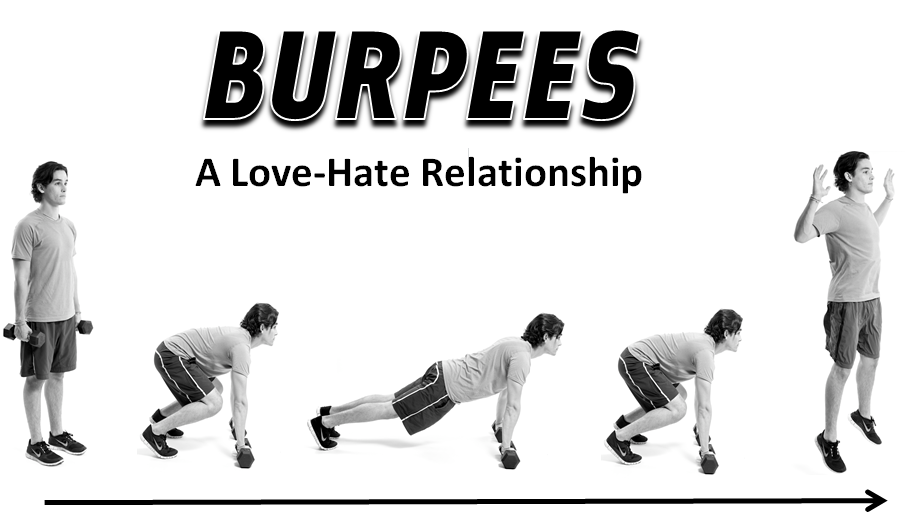 One thing I can predict every time a client looks at his workout, is a low groan when he sees "Burpees" listed in the circuit. "Oh lawd, not BURPEES!"

If you workout, more than likely you are familiar with a Burpee, especially if you do any form of circuit training and or do plyometric exercises. For those of you not familiar with a burpee, it's  a full-body explosive movement that usually contains the following 6 movements.
You can do it with or without the pushup, add a dumbbell overhead press, do it with your hands on a medball, the variations are endless. I often have my clients use an inverted BOSU as a hand grip (with or without adding the pushup) and then instead of jumping, I have them press the BOSU above their head after returning to a stand.

I'm often asked, "Where did this form or torture come from?" Sorry to say, not from hell. LOL! It actually was developed by a man named Royal Burpee. He developed it as a part of an exercise test in the late 1930's. It was used by the military to test overall agility, coordination, and fitness. His version however, was a milder version. It was a 4-point movement without the pushup and vertical jump. His version was repeated only 4 times as a part of his testing. During the test he took several different heart-rate
measures and used them in a calculation he created that assessed the heart's efficiency at pumping blood which he used to measure the person's overall health.
Mr. Burpee actually warned against doing his version aggressively. Jump ahead about 80 years and boy has the burpee blossomed. Turns out it actually is a great full-body movement which can also incorporate explosive plyometric movement. Form is essential and like any exercise, if done with poor form, then injury can occur. So, be careful not to get too carried away with excessive repetitions as the cost of good technique. Burpees are a great exercise to do when you want a good workout, but have no equipment.
Posted by RunnerDude at Friday, December 19, 2014 2 comments:

2014 A Year to Celebrate at RunnerDude's Fitness

2014 has been an awesome year for RunnerDude's Fitness. We've grown over the year with our biggest fall race training group ever (70+ runners)! Each and every runner is an amazing person with an amazing story to tell. This video tries to capture just a tad of their spirit which makes RunnerDude's Fitness what it is...a home for runners. I can't wait to see what 2015 has in store.

RunnerDude's Fitness Celebrates 2014 from Thad McLaurin on Vimeo.
Posted by RunnerDude at Thursday, December 18, 2014 No comments: