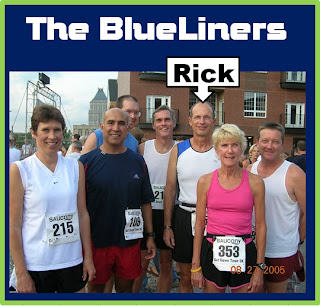 Rick King, a good friend of mine and a founding member of my running group (The BlueLiners) has struggled with what he thought was exercise induced asthma while running. His breathing difficulty resulted in wheezing and breathlessness that would progressively get worse the harder he exerted himself.
Originally, the wheezing occurred during damp, cold hard runs particularly races. Over a few years, the problem progressed to about every run when the intensity of the run increased such as going uphill. A couple of doctor visits suggested exercised induced asthma with the treatment being inhalers. None of the inhaled medications improved the situation. After ruling out any mass in his lungs and heart problems, several doctors seemed stumped.
During a pulmonary stress test, the technician mentioned that Rick's problem might by Inspiratory Stridor (IS) caused by vocal cord dysfunction (VCD). The key indicator was that the wheezing was occurring on the inhale rather than asthma related sounds occurring on the exhale. Apparently with increased exertion the pressure gradient in the airway triggers a reflex action of the vocal cords as if they were protecting the airway from food or liquid entering the lungs which results in constriction that creates the sound and lack of breath. This creates a vicious cycle as you try to inhale even harder to get more air, creating more restriction.

After an ENT determined that Rick didn't have any structural problem with his vocal cords, he was sent to a speech therapist. They've worked on diaphragm breathing (observing your stomach extending during inhaling rather than your chest) and vocal cord relaxation (visualization of a wide open throat and stretching the cords doing something similar to a gag reflex). After a couple of visits, Rick has been able to run and avoid wheezing.
This is such good news! Rick was so elated to find a solution to his problem that he wanted me to share it on the blog. If you've been diagnosed with exercise induced asthma but you're not getting relief from the prescribed treatments, you may want to ask your doctor about Inspiratory Stridor (IS) caused by vocal cord dysfunction (VCD).
Thanks Rick!
Posted by RunnerDude at Tuesday, August 04, 2009

We are so happy to have Rick feeling better, now he'll be able to keep us entertained with his stories without having to stop and catch his breath!

Good to know! Thanks for sharing!

I get that especially when I swim, and recently what I tried to do is to breathe "with my stomach" when I swim. IT HELPED! Just a way to take in more air and relax.

I've been thinking about going to a doctor and asking to see what's going on. But for now, I'll just adhere to the "if it ain't broke, don't fix it" rule, haha.

Asthma problem is a terrible problem that is suffered by many millions of people all over the world, although there does seem to be a higher prevalence of asthmatics in developed countries where the diet is richer than there are in less developed countries.