8 Tips for Increasing Your Speed! 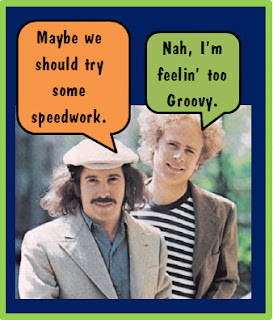 "Slow down, you move too fast. You got to make the morning last. Just kicking down the cobble stones. Looking for fun and feelin' groovy. Hello lamppost, What cha knowing? I've come to watch your flowers growing. Ain't cha got no rhymes for me? Doot-in' doo-doo, Feelin' groovy."—Simon & Garfunkel

Doot-in' doo-doo...do you wanna blow those flowers away and leave that lamppost in the dust sometimes? Not sure how to get the extra oomph you need to leave the groovy and put your groove on instead? Try a few of the following tips and you'll be blasting those cobblestones away in no time.
1. Drop 5-10 lbs. Easier said than done, but dropping 5-10lbs will help increase your speed. Some research shows that it can decrease your race time by 1-2 minutes.
2. Run with someone faster than you. I don't need any research to back that one up. I am the research. I credit my increased speed to my buddies Les, Jim, Mike, Kelly, and several others that I run with that constantly keep me challenged with speed. It's a whole lot easier to go faster with a buddy than trying to motivate yourself to run faster all by your lonesome.
3. Add fartleks to a weekly run. This is such a simple but effective technique. A fartlek is simply an informal interval thrown into a regular run. All you do is speed up for a designated time or distance during a run, then slow back down, then speed back up, then slow back down. For example, after running at normal warm-up pace for about a mile, crank it up to your 10K pace and hold that pace for 1 minute, 2 minutes, 3 minutes, 5 blocks....whatever time or distance you desire; then slow it back down again and repeat a few more times along your route. You'll be amazed how much faster you run that regular route by throwing in fartleks. In addition to the increased speed, you'll be helping to train your body to handle speeding up during times of fatigue—something that will come in very handy in an endurance run.
4. Add a weekly tempo run to your routine. A tempo run is simply a run (usually 4-8 miles) that's run at a faster pace (typically a little slower than your 10K pace). Think of it as a really long fartlek. Warm up for a mile, then do 2-6 miles at tempo pace and then do a cool-down mile. For example for a 4-mile run, run 1 easy warm-up mile, 2 miles at tempo pace, and 1 easy cool-down mile. Be sure to start with a shorter distance for your first tempo runs before working your way up to the longer tempo-run distances. Tempo runs are the bridge between those weekly slow runs and your fast-paced race. They help prepare your body physically for the demands of running at race pace as well as help prepare you mentally for the demands of running at a faster pace.
5. Run Intervals. Intervals are a great way to increase your speed. An interval workout is usually short in duration but much more intense. Typically intervals are done on a track and consist of doing several rounds of short sprinted runs such as a 200, 400, 600, 800, 1000, or a 1200m. An interval workout may look something like 4 x 800m; rest 1minute. That means to run an 800 meter interval with a 1-minute rest in between four times. For more about intervals and some sample interval workouts [click here].
6. Add some Hillwork to your routine. Hillwork is another great way to increase speed. Uphill running helps you learn to recruit fast-twitch muscle fibers which will help you run at maximum intensity. Learning to recruit these fast-twitch muscles will help you during an endurance run when you need to ramp it up or when you need to pull yourself out of fatigue. Downhill running is also great. Thanks to gravity, you naturally run faster going downhill. This is a great way to see what it's like to run at a faster pace and with a faster turn-over.
7. Increase your stride rate. There's a bit of controversy over whether a shorter or longer stride is better. In a Runner's World article (Oct. 2008), Patti and Warren Finke (RRCA-certified coaches for over 25 years) said that "most biomechanists think that the body chooses stride length and turnover based on its own biomechanical characteristics. Studies of elite runners show that they tend to use shorter strides with a higher turnover. Many studies of running efficiency show that, when runners try to change what the body chooses naturally, the result is a loss of efficiency. It is likely that the turnover and stride length of the elite runners is due to their biomechanics rather than conscious effort to alter turnover." So, don't worry so much about your stride length. But you can focus on improving your stride rate. Most elite runners have about 180 strides per minute. Check out your stride rate by going for a run and counting each stride for a minute. (Note: an easy way to do this is to count each time your right foot hits the ground for a minute and then multiple that number by 2.) Don't be shocked if you're nowhere near 180. But, by focusing on cadence and using some of the tips above you'll be pleasantly surprised when you recheck your stride rate. I bet you'll see an increase.
8. Expect some discomfort. There's a lot of truth in the saying, "No pain. No gain." Don't be scared of a little pain. DMSO (Delayed Muscle Soreness Onset) is expected a day or even 2 or 3 days after a hard workout. Don't mistake that soreness with injury. In order to gain some speed, you're going to have to do some work and this work may not be the most comfortable thing in the world. But those pains are a sign that you're building endurance as well as the muscle strength to handle that new speed and endurance. Use common sense, however. If you have pulled muscles, persistent pain, or extreme pain not related to the increase exertion, then back off and see a doctor.
Posted by RunnerDude at Friday, August 07, 2009

Perfect timing! I just started interval training hoping to increase my speed a bit. The other tips are also great and I will be sure to incorporate as many as I humanly can. thanks!

Hey Regina! You'll be surprised how much that short weekly interval workout will improve your pace in longer runs. Really does help. Keep me posted on your progress.

hey- this is exactly what i needed to read right now. i deplore speed work. but i need it. and you've given me some choices. choices are good so i can alternate between most despised to mildly tolerated 'speedwork'. its kinda like hiding my brusselsprouts under 5 different kinds of recipes. :)
thank you for the great value that you provide all the time for your readers.

Hey Runnrgrrl!Thanks for the feedback. I know what you mean. I get tired of just intervals and like to through in some different types of speed work. Keeps it fun.

Oh yea! So my running with you on Thursday takes care of that "run with someone faster than yourself." Lisa and I were laughing how you're trying to hold conversations with us and we're like, "Gasp... gasp... pant...urrrgh..." in response. =)

Hey Dena! Next time I'll stick to questions you can nod or shake you head to. LOL! Sorry.

I must admit I've not considered stride rates, but it makes sense. Good info to know!

Great post, I have actually been trying to increase my cadence for a few weeks now. It feels pretty good. Just have to get where it becomes natural.

Hey Burt! That's awesome man! Like I told Thomas (for me anyways) when you just pay more attention to your cadence it really seems to help. I call it "conscious running"-being aware of your body when you're running. Keep me posted on your progress!