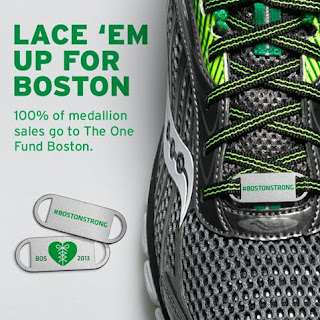 Boston-based performance running brand encourages runners to show their support for victims with specially created shoelace medallion; Saucony to donate 100 percent of sales to The One Fund Boston

LEXINGTON, MA (April 23, 2013) − In an effort to inspire runners to honor and support the people most affected by the tragic events that occurred in Boston on April 15, Saucony has created the #BostonStrong Lace Medallion to be offered as a fundraiser for The One Fund Boston. The two-sided medallion features the viral hashtag and unity motto #BostonStrong on one side and a custom-designed, laced-up heart icon on the other.

Runners can obtain the #BostonStrong Lace Medallion for five dollars per pair. For every pair of medallions purchased, Saucony will donate 100% of sales to The One Fund Boston, established by Massachusetts Governor Deval Patrick and Boston Mayor Thomas M. Menino to help the victims of the Boston Marathon bombings.

Runners can pre-order the #BostonStrong Lace Medallions at saucony.com beginning Wednesday, April 24th. Medallions will be available to ship within three to four weeks.

Also, if you're so inclined, please go to onefundboston.org to make a direct donation.
Posted by RunnerDude at Tuesday, April 23, 2013 No comments:

The Importance of Base-Building for Marathon Training 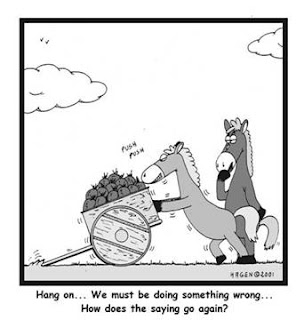 Many runners have a similar syndrome. I call it "Cart-Before-the-Horse-itis." I've worked with a few who have experienced the syndrome. They'll complain about this pain or that. This injury or that. I'm thinking to myself..."your marathon training doesn't kick in until 2 or 3 months down the road. What are you doing to feel like this?"

Okay, I can understand that, but the problems is that without a proper base and without a proper progression of increased intensity over the period of the "real" training plan, these runners up their chance of injury exponentially not to mention the head-games that can occur this early in the game.

Between major endurance races, like a spring and a fall marathon, runners shouldn't be doing intense speed work like intervals, hill repeats and tempo runs. Nor should they be doing extremely long runs or logging high mileage weeks before official training begins.

Running is not unlike other sports that have periodization or "seasons." Like football, soccer, basketball, or hockey, there's a pre-season, in-season, post-season, and off-season to running.

If you recently ran or are about to run a spring marathon and you plan to run a fall marathon, then it's best to think of yourself in "Off-Season" or "Recovery" for about 4 weeks after that spring race. Take the first week completely off. During weeks 2, 3, and 4 you can begin doing some light running but nothing intense (pace or distance). This will give your body time to truly heal and rebuild from your spring race.

After the fourth week, you can move into your "Pre-Season" or "Base-Building" phase and start building back your weekly mileage base, but gradually. This will help you condition your body to being back on the road or the trail. During the "Pre-Season" time, work your total weekly mileage back up to 20-25 miles for at least a month prior to the start of your official training.

To read the rest of the article go to Active.com