Over the years, I've been very fortunate in having opportunities to interview Olympic athletes. In 2012, I was able to interview Shalane Flanagan and Kara Goucher just before they headed to the London Games. Yesterday I had the opportunity to catch up with two-time Olympian, Nick Symmonds. 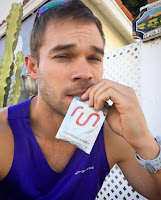 Nick's first Olympic experience was at the 2008 Games in Beijing, the second taking place at the 2012 Games in London. Unfortunately, Nick was not able to make a third Olympics (Rio) due to an ankle injury just before the Games. In January, Nick announced he'd be retiring from competitive running after the 2017 outdoor season. It's been about 10 years since Nick turned pro and he's had an awesome career as a runner and his legacy will continue with his support of runners (and all endurance athletes) with his new product, Run Gum. Talking with Nick, I got to know a little more about this talented runner and outspoken advocate for athletes' rights.
Take some time to check out the interview below to learn even more about this pretty cool Dude.

Posted by RunnerDude at Thursday, February 16, 2017 No comments: