Lorenda is a frequent reader of the blog and I always look forward to and enjoy her comments. She has an awesome story about getting older and running and what a wonderful thing the two combined can be. Here's Lorenda's story in her own words: 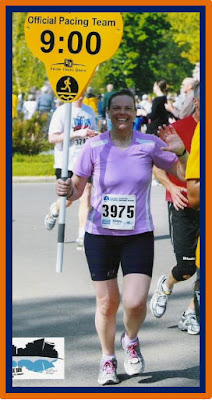 Since I started running races and going to group runs I am meeting people 10, 20, 30 years and more older than me who still run and some of them run faster than me. This has made me not so afraid of getting older. I used to worry about it, I wasn't happy about turning 30 and was a complete mess when I turned 40!! I will be 47 this fall and 50 just keeps getting closer. I keep reminding myself of these people who are in their 60s and 70s who still run and who still run well.

Two years ago after finishing a marathon I was sitting at a table eating when a man came along and sat down and began eating his food, I figured that he had just finished. We got to talking and I found out that he had not just finished, he had been finished for some time, in fact he ran the marathon 33 minutes faster than me. He had recently turned 70 and this was his 70th marathon!! The 70 yr old man had just run a 3:36 marathon! I remembered his number and looked in the results later just to make sure!

One of the women in a running group I belong to is 63, she won her age group in a huge half marathon last year and her time was faster than my half marathon PR.

I work in a medical career and see so many people in poor health. I see many people who have lived a sedentary lifestyle and are obese and can't do much of anything—some of them are my own age. It's not uncommon for me to transport nursing home patients in their 60s and 70s during the night shift; then the next day go to a race or a group run and see people the same ages as my patients running a 5K in 22 minutes or do a 15-mile long run!

I love talking to the "grand masters" runners and asking them about their years of running. I have asked many of them if running has given them a better quality of life in their later years. They all say that they believe it has. Many will tell me that their friends who used to call them crazy for wanting to run long distances are now in wheelchairs. I know an 82 yr old man who runs in many 5Ks all summer and still does one triathlon every year. His running has slowed (his 5K time is now 40 minutes), but he says that he is in very good health and can still do all of the every day things he needs to do and enjoys life and he credits his active lifestyle.

Anyway, my point in all of this is that because of running I have met these people and now I am not so afraid of aging. I know that some people will have health problems even though they have lived a healthy lifestyle but I have every hope that I will have a good quality of life for many many years to come. My goal is to still be running everything from 5Ks to half marathons (maybe even marathons) and still doing triathlons in my 80s and beyond!! My youngest kid just graduated and is heading off to college, so now I can start my half marathon in every state quest!! Because I have met these older runners, I look forward to many years of running and enjoying life and living it to the fullest. I have learned that getting older is not going to be so bad. —Lorenda from Michigan, a masters runner not afraid of becoming a grand masters runner!

Thanks Lorenda for sharing your story! I'm not far behind you (I'm 44) and I'm learning everyday from some of my older more experienced runner friends. One thing I've found as I've gotten older is that the competition seems to be getting tougher! That's a good thing!
Posted by RunnerDude at Monday, August 17, 2009

Email ThisBlogThis!Share to TwitterShare to FacebookShare to Pinterest
Labels: after running, getting older and running, grand masters, masters running

Thanks TC, Zoë, and SchoolKidRunna23! I wanna be running when I'm 100!

It's so nice to hear about older people still running. I didn't even start running until I was 53, 3 years ago. I hope I keep it up for the rest of my life. I love what it does for me.

Great story! I run with a group that has a 61 year old guy and a 70 year old woman and they are incredible. My running group also has 20 year olds who make me feel old - but wise :)

Hey Gina! You only started runnin 3 years ago?!!! You're awesome!

Hey Noah Moore! Welcome to the blog! There's a 60 year old lady in my group that's an awesome runner too. She even placed in her age group in Boston a few years back.

Great story. Running is not only good exercise, it becomes a major part of your lifestyle. I'm 47 and plan on running well into my senior years. I love seeing older folks running races and passing me!