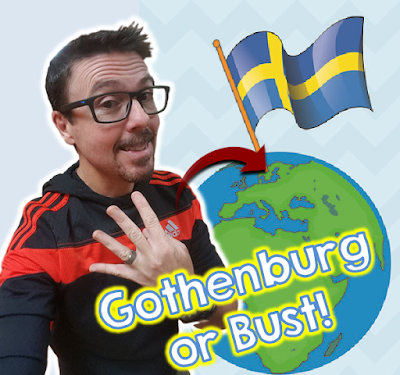 The Gothenburg Half Marathon is only 4 months away! It's suddenly becoming very real! For those
who do not know, I was invited by Volvo Trucks to run with their corporate team at the Gothenburg Half Marathon, the largest half marathon in the world. It has over 60,000 runners! I've been leading running group at Volvo's North American headquarters which just happens to be located in Greensboro, NC where I live. Mack Trucks and Volvo Financial Services are also owned by Volvo and they are also located here in Greensboro. I'm in my 5th year working with Volvo and have helped coach/train hundreds of their employees from all three companys. It's through this awesome relationship that I was asked to join their corporate team in the running of the Gothenburh Half.

This is not only an awesome opportunity to run with and represent Volvo, but also for RunnerDude's Fitness. I've alwasy felt that runners are one big family and it will be a great opportunity to meet and get to know some of the "family" on the other side of the pond.

In preparing for and saving for this monumental trip, some of my runners suggested setting up a GoFundMe page to help raise the funds needed to cover the expenses of the trip. After much thought, I decided to take their advice and the response has been overwhelming and has touched me greatly.

Any size donation is greatly appreciated. Be sure to check out the Gold, Silver, and Bronze donation levels. Each of these levels will enter you in a drawing for a chance to win either a $100, $75, or $50 REI gift card! I plan to document my experience here on RunnerDude's Blog so that everyone can have a virtual experience with me and the runners while in Gothenburg. I'll  announce the Gold, Silver, and Bronze lucky winners of the REI Gift Cards on the blog on May 21st, 2016, the day of the Gothenburg Half Marathon.  Individuals donating at the Gold level will also receive a copy of my book, Full-Body Fitness for Runners, which contains over 90 exercises for runners, nutrition info, and more!

Thanks so much to everyone who has already contributed!! I would not be able to run with the Volvo Corporate Team without your support. I've almost reached my goal due to your awesome support!

Posted by RunnerDude at Monday, January 11, 2016 No comments:

So, did you eat way too much and exercise way too little over the recent holiday? Did you miss the January 1st window for making a New Year's Resolution? No worries! There's plenty of time! There's over 300 days left in 2016!

The clip below was originally posted on my Facebook page just before Christmas Eve, but besides the holiday music in the background, the workout is still a great one to help put a dent in the damage you may have done over the holiday.

So, take a few minutes and look at the video from start to finish and write down the exercises to help you remember them and then get started! Remember, if you don't have a kettlebell, you can use a dumbbell or a jug of laundry detergent! Many can be done just with body weight. No excuses!!

If you do the workout, post a few pics of your efforts in the comments section below!! I'd love to see the fruits of your labor! 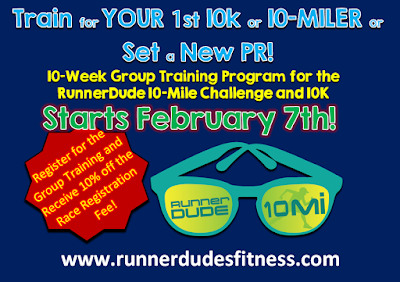 Whether you're training for your first 10-Miler or 10K or you want to PR, join us on Feb 7th! That's when the 10-week Group Race Training for the RunnerDude 10-Mile Challenge and 10K begins! Only $55 for 10 weeks and you'll receive a special discount code to save 10% on the Race Registration fee at Trivium Racing!! For more information or to register for the group race training go to www.runnerdudesfitness.com

The RunnerDude 10-Mile Challenge and 10K takes place on April 17th in Greensboro, NC. It's going to be a beautiful route which will traverse our awesome Atlantic & Yadkin greenway, Country Park and surrounding neighborhoods. There's prize money too for the top three male and female placers for both the 10-Mile and 10K! The 10-Mile Prize money is sponsored by TriadRunning.com and the 10K Prize money is sponsored by RunnerDude's Fitness.
First = $100
Second = $50
Third = $25

So, even if you're too far to come train with us, I hope you'll consider traveling to us on race day!
To register for the race click here.
Posted by RunnerDude at Saturday, January 09, 2016 No comments:

New Year's Resolutions. Have you ever made one? I bet you have. Every January, people all over the world maKe health and fitness resolutions.  That's awesome. Start out the new year on track, with a goal and vision to better yourself. However, the sad truth is that around 30% give-up the very first week! An ever bigger percentage give up during weeks two and three. I've seen proof of this driving by the big box gyms in my area. January 1st the parking lot is full. February, you'll see tumbleweeds rolling around in that same parking lots.

Why is that? Why do so many give up so quickly? Self-Sabotage! Often our resolutions and goals are so lofty and huge that they are unobtainable. We are so quick to completely remove something or stop something as a part of our resolutions. "I'm going to stop eating carbs. No more sugar! I'm going to stop eating meat. I'm going vegan!" Or, we're too quick to add drastic changes to our routines. "I'm going to run every day, no breaks! I'm going to workout one hour every day. I'm going ride my bike to work each day!" The basic root of the resolution is solid, but it's often the severity of the limitation or addition or the time frame in which we've given ourselves to accomplish such a goal that we soon realize it just "ain't gonna happen."

I have people come to the studio all the time telling me that "I need to get them to lose 30 lbs in a month." Two things wrong with this expectation. First, the time frame is very unrealistic. Second, the responsibility has been placed on me to get them to lose the weight instead of the individual taking ownership of the weight loss. This is not a scenario for success.

It's great to have goals and to challenge yourself, but if those goals are too unrealistic, you'll only set yourself up for failure.

In stead of wanting to lose 40 lbs by February, make your goal to change your body composition by February. Often when starting to lose weight , especially if you're also beginning to exercise along with your nutrition changes, you may not initially see the weight loss you expect reflected on the scale. This is because your body is going through lots of changes. While you may be losing some body fat, you may also be 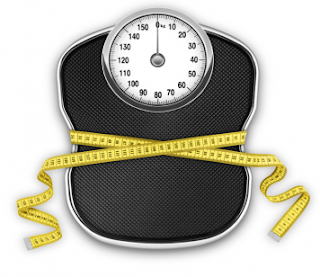 gaining a little muscle. That's a good thing, but as a result, the scale may not show the awesome changes you're actually making. So, instead of initially focusing on the scale, focus on measurements. Week 1, measure the circumference of your bicep, chest, waist, hips, thigh, and calf. (Note: Be sure that when you measure your bicep, thigh, and calf that the measurements are all on the same side, so that when  you measure at a later date you'll remeasure the same side. Your left and right sides can have different measurements, so sticking with the same side will keep your data accurate.) Record the measurements  in a journal or on a spreadsheet, so you won't forget. Give yourself three months to work on your diet and exercise. Weigh yourself periodically if you'd like, but don't redo the circumference measurements until the end of the 3rd month. Nine times out of ten, when  you redo those measurements, you'll find that your circulference measurements have decreased! You're an inch smaller here, two inches smaller there, and inch and a half smaller there. So, while the scale may only say you've lost 10-15lbs you may actually have lost a total of 5-6 inches! Proof of your hard work!

Once you continue beyond this point with your nutrition changes and exercise, you'll begin to see more weight loss. The key really is consistency.

The same applies with running. Instead of on January 1st deciding you're going to run a half marathon that spring (even though you're not currently even running 1-mile without stopping), commit to building on that mile. Focus on endurance and building a base. I recommend that a runner build up to a total weekly mileage of 15-20 miles a week for 4 weeks before beginning training for a half marathon. So, begin by running 2-3 days a week to build that base. Don't focus on pace, just run. If you're currently running about a mile add a few minutes of running to the end of each run gradually increasing your distance. Build to 2 miles, then three over time. Then move to 3-4 days a week. That way when you do start that half marathon training, you won't be trying to build a base while at the same time your trying to acclimate to the demands of higher mileage in your training.

You have a whole entire year. Think through your resolution. Set yourself up for success not failure. You can do anything you put your mind to as long as you're realistic with your goals and time frame.
Posted by RunnerDude at Friday, January 08, 2016 No comments: