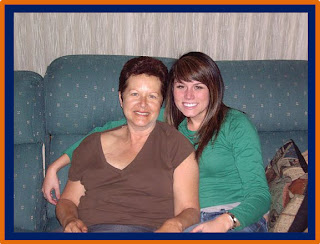 Danica is a fellow Twitter friend of mine as well as a frequent visitor of the blog. She has an amazing story about her courageous mom's battle with cancer and how running helped Danica gain back some normalcy in her life after the passing of her mom. Here's Danica's story in her own words:

"I share a story that I never thought would be my life. I never imagined any of the things in my life would happen to me, and that I would be 'that girl', but through it all running has helped me grow and reflect on so many different aspects of my life, that without it, I don't even know where I would be today. I begin with a background.

My sophomore year of high school, my mom was diagnosed with breast cancer. She was on and off treatment including chemotherapy and radiation all throughout my high school and beginning of my college years. She was never horribly sick, but she was tired, and took many more naps and cut back on her 40 hour work weeks volunteering at the Christian school I went to growing up. If any of you met my mom, you would know instantly that she was a fighter. She was so stubborn and she bullied the cancer to have her life stay as consistent as it was before she was diagnosed.

I went to many doctor appointments with her, and once I moved away to college, we became very close. This time really allowed me to see the core of my mom, the person she was, her beliefs, her thoughts, and her wishes and it made me see who I wanted to become.

In March of 2006, the doctor came back after some testing and told her and my father that she had three to six months to live. Three weeks later she passed away. I spent those last three weeks in an abyss of artificial smiles and complete confusion. I had no idea what was happening, or how I would handle everything, and once the reality hit, she was already gone.

I was exhaustively lost after that happened. I had been running every year in high school and off and on in college. I completely stopped running. I stopped functioning. I couldn't get one foot to go in front of the other, none the less make my legs follow. I couldn't sleep. I couldn't eat. Everything had lost flavor and I had lost interest in life.

One day, I decided that it was time that I stop wallowing in my confused state, and get my life back together. I was still going to school at the time, and decided that I had to finish out the semester, after dropping one class. I finished my 18 units, but I was still very lost.

I felt like I didn't want to run because it was something I did when my mom was alive. Though I absolutely hated her at my cross country races, and I hated her watching me run track, and even hated her watching me sit the bench while on the soccer team, I wanted her there for me. I wanted to know she would be there when I got home from my run. I wanted to see her again and I felt like running was something that I couldn't do again, it wasn't apart of me anymore.

It came to me one morning. I needed it. I wanted it still. I wanted the consistency, and I wanted the control. This was when I went out once again, and found the comfort of the road under my feet. The first run I completed after she passed was a short three miler, and once I got under the cover of the brush around me, I broke down and just cried as I ran, but nothing had ever felt so good. I had consistency again, I had a path in front of me, and I had something that no one could ever take away from me.

I had breath in my lungs and with tears streaming down my cheeks, I just ran. I allowed myself to hurt, and to feel again, and I allowed myself to think. To think about the changes, about the future. It was a time of thinking. After that run, I didn't run again for a while, life got in the way, but since then, I have realized that running through the hardest times in your life, gives you something that you control. You can do it. You can come back to it. You can make a change, but you have to choose too.

So granted, I also went to counseling, and did a lot of prayer during this time, obviously, but I know, without running the biggest transition of my life wouldn't have led me to the story I have today, to the outlook I have today, or the attitude I have today. So many people tell me they are so sorry, and I am sorry too, but I can't change that, and I am lucky that I got to see a great example of what I want to become one day, and learn so many life lessons at such a young age.

Sometimes I look back at my short life thus far, and think about things that could have changed, or could be different, but I know that God had this all happen for a reason, so I got it to take it and run with it. —Danica

Thanks Danica for sharing such an inspirational story. Be sure to check out Danica's awesome blog The Chic Runner. Danica has decided to take on an awesome challenge. She's decided to do the Avon Los Angeles 2 Day Breast Cancer Walk. This is 39 miles in 2 days throughout the Long Beach Area. In order to take part, Danic's needs to raise sufficient funds. To help Danica reach her fundraising goal [click here].
Posted by RunnerDude at Wednesday, August 12, 2009

Email ThisBlogThis!Share to TwitterShare to FacebookShare to Pinterest
Labels: cancer, chicrunner, running, why I run

What a touching story - you so made me cry like crazy, Danica.

You are an amazing writer!!!

Your story has brought to life the meaning of running for me too, and I really appreciate having found your words today.

I am sure your mom's brave and loving light is shining down on you always.

RunnerDude, thanks for posting this :)

Thanks for sharing her story :)

I read this one on Danica's blog, it is amazing, heartfelt and honest. Thanks for sharing it here.

That is a very touching story...I go by Chic Runner often and love Danica's blog!

Running can provide so many things to so many people...

Very moving, something we all need to read and remember. It reminds me that WE CAN run for that we should also be grateful!

Thanks for sharing your story, Chic Runner, and thanks RunnerDude for posting it. Danica's mom would be so proud of her, and I am she is watching proudly from above. I'll check out and make a donation to her website.

A great story thanks for sharing it with us!!!

Hey Caroline! You are most definitley welcome. Danica's story if very moving. Touched me as well.

I so get it. When my sister passed away, I remember the only thing that felt good was to run. Like I was running away the pain, the frustration, the sadness. It was cathartic for me too. thanks for sharing this.

Hey Everyone! Thanks for all the sweet comments. I'm glad so many people can relate to me, and though a tough situation to deal with, I'm glad that I have running still! Thanks again!

Thank you for posting Danica's story and for sharing the link to her blog as well. I was really moved by reading this. I can't imagine what it must have felt like to be so young and lose one's mom. Danica is a brave and inspirational young woman and her mom sounds like she was a beautiful angel here on earth for awhile. Christine