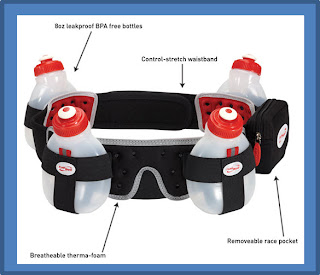 I started doing more long distance running in 1997 when I began training for my first marathon (NYC). At the time, I hydrated before my runs and sometimes I'd carry a bottle of Gatorade along with me, but that was a pain to keep up with. Eventually I bought a water-bottle belt but I had to wear the belt so tight in order to keep the bottle from bouncing that it was incredibly uncomfortable. So to get the relief I needed on those longer runs, I figured I'd buy a few cheap water bottles and stash them along my long-run route. I managed those first couple of years with my stashed water, but it was a bit of a pain to put them out and then have to collect the bottles later after my run.

One day while out on a run, I saw a runner with these small plastic bottles strapped around his waist. I wasn't close enough to really check out the belt, so after my run and a shower, I searched online for what I had just seen. My search turned up this cool company called Fuel Belt. I ordered a 4-bottle belt and have been sold on them ever since. Zoom ahead to 2009 and Fuel Belt is on the Inc. 5000 list of fastest-growing companies. It's also ranked one of the top-selling accessory collections at specialty retail by Leisure Trends.
Fuel Belt was started in 1998 by Vinu Malik. About ten years earlier (1986), while in college, Malik suffered from chronic fatigue syndrome. One day he saw a picture of Ironman champion Dave Scott on the cover of a triathlete magazine and somehow this spurred Malik on to wanting a new lifestyle. Inspired by the picture, Malik began his journey into becoming a triathlete. Never having been into fitness, at the time Malik couldn't swim a full lap. Nor could he bike more than two miles or run even half a mile. But he kept at it and by the end of that summer was up to 35 full laps in the pool. He entered that first triathlon and placed 64th out of 67 contestants. Malik has continued his passion for triathlons and now is a 6-time Hawaii Ironman Finisher and 27-time Ironman Finisher.
In 1998, during an Ironman competition in the Canary Islands, Malik saw a "homemade" hydration system that another contestant was wearing. Unlike the single bottle that bounced around, this belt held multiple bottles. This homemade contraption stuck in Malik's mind and when he got home he borrowed his mom's sewing machine and began experimenting with fabrics. He found lotion bottles worked well in his initial invention. After several versions, he settled with a black elastic fabric. Today Fuel Belt offers a variety of styles from 1-bottle up to 6! And, the belts come in a variety of colors. 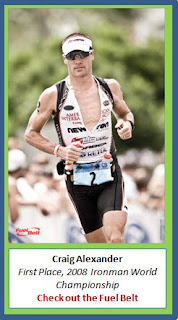 The Helium belt is the newest in Fuel Belt's line. It's available in a 2-bottle and a 4-bottle belt. The Helium belt offers a control-stretch waistband with wider Velcro closure that provides a secure, custom fit. The 8oz bottles are ergonomic, leakproof, dishwasher safe and made of recyclable BPA-free LDPE (No.4) plastic. The breathable therma-foam helps keep you cool in the heat. Each Helium belt comes with a removable race pocket, perfect for salt tabs, gels, keys or cash. The total volume that the 2-bottle belt holds is 16 oz. and the 4-bottle belt holds 32 0z.
Never tried a Fuel Belt? Need a new one? You're in luck! Enter RunnerDude's drawing for a free Black, 4-bottle Helium Belt from Fuel Belt. Simply email RunnerDude at runnerdudeblog@yahoo.com. Be sure to put "Fuel Belt Contest" in the subject line. The entry cut off is midnight (EST) on Monday, July 13th. Each contestant will be assigned a number in the order that the emails are received. The winner will be selected by using the True Random Number Generator at Random.org. The winner will be announced on Tuesday, July 14th.

Good luck to everyone and a big thanks to Fuel Belt!
Posted by RunnerDude at Friday, July 10, 2009

Me wants to win! I sent an email. Thanks.

Hey Isela! Got it! You're entered. Good luck!!! Hey, which marathon are you traininig for?

I can wear a fuel belt on trails but it bothers me on pavement runs. I just have one of those water bottles that strap to your lower back. Wonder if this kind will make a difference? If I win, we'll see...

I haven't purchased a helium yet, I still have the original, but I've tried one on before and it does fit better and I like the fabric better. Plan to get one ASAP. Check at Off n running and see if they carry the helium and you can try it on and see what you think.

I'll send an email, I would love to win this. I have one and love it, but I've put all the bottles in the dishwasher repeatedly and now they leak. I'd also like to have 2 for really hot, long runs.

Thanks for the comment and story earlier this week - you're proof that going through 'these hard times' are really just an opportunity to do what we'd really like to with our lives.

Here's hoping for the best in all of our endeavors. :)

Dude..Your blog is lookin great. I need to step it up a bit. I am going for a run now on the trails off the Blue Ridge Parkway outside Asheville. What a great trail run. Later.

Hey TC! Thanks for the feedback on the blog! Ashville is beautiful! Enjoy your run!

I'm a bottle stasher. I put a bottle in my mailbox and then loop around about every 3 miles or so. It's kind of a pain and a fuel belt would be sooo nice!

fuel? in a belt? it doesnt look like a fanny pack? that's awesome!

Just sent my e-mail! I'm currently training for NYC and just had a question if these belts are recommended during marathon runs. I just completed a half in Fairfield a few weeks ago and was thinking of upgrading to one of these. Any information is greatly appreciated.

Hey Matt! Yes, many runners including myself use hydration belts durin a marathon. They are particularly helpful if the race is using a different sports drink and/or gel from what you've been training with. This way you can carry your own. It also allows you to control when you take in your fluids and gels instead of depending on the water stops.