Helping the Homeless Get Back on Their Feet Through Running

Recently I was reading a favorite blog of mine—Believe In The Run—that's hosted by a Twitter friend of mine, Thomas Neuberger. Something in one of the posts—Baltimore 10 Miler Race Re-cap—really intrigued me. He mentioned a running team called Back on My Feet (BOMF). I followed a link he provided to the BOMF website and discovered a really cool organization. I invited Thomas to be a guest blogger and share exactly what Back on My Feet is all about. Here's his story:

Recently, I sat down with my friend Jeanne Bayers after a great speed work out at a local high school to discuss her involvement with Back On My Feet (BOMF). Back on My Feet is a non-profit organization (originally founded in Philadelphia) that promotes the self-sufficiency of the homeless population by engaging them in running as a means to build confidence, strength and self-esteem.

The organization does not provide food nor does it provide shelter, but instead provides a community that embraces equality, respect, discipline, teamwork and leadership. There are no labels, no stigmas and no stereo 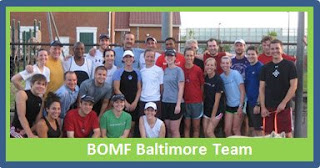 types. At Back on My Feet, all members - regardless of race, education or socioeconomic status - join together to move their own lives forward as well as the lives of their teammates.
Jeanne Bayers is part of the Baltimore team, which is the second city for the BOMF program. Things are going so well in Baltimore that they are adding additional shelters to the program. BOMF will soon be expanding to it’s third city— Washington DC.

First, let me tell you a little bit ab 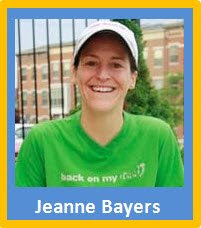 out Jeanne. She's been running since high school on the cross-country team. Then her running became sporadic in college. "Every time I gained weight I would start running (again).” Jeanne comes from a running family so she was always involved with road races, but had never run a marathon. It wasn’t until Jeanne cheered for her BFF, Colleen while she ran the Marine Corp Marathon in DC, that the idea to run a marathon clicked for Jeanne. Since then, she has run several marathons including Boston this year. She even prequalified for Boston with her Boston Marathon time. That is awesome!

After reading about BOMF in an article in Runner’s World Jeanne found out that the organization was coming to Baltimore. She immediately started emailing to see how she could get involved. BOMF had an event at a local pub in Canton (Baltimore neighborhood) where you could meet some of the residents (runners living at shelters) and non-residents (BOMF volunteers). Their stories were very moving and powerful. Having an addict in her own family, the stories really resonated with Jeanne. Knowing what running has done for her and having seen first hand how addiction can destroy a person’s life, Jeanne was determined to contribute as a non-resident runner. 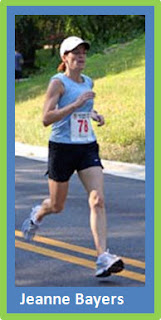 Jeanne began running with BOMF in the early spring of 2009. There were a couple surprises. First, the residents were not the stereotype of what you might think of when someone says inner city homeless addicts. "We have some guys who are 20 years old and guys who are 55 years old in the program and they come from all walks of life. When you are running with them, I mean I could be running with them down the street and people would have no idea who are the volunteers and who are the residents. You can’t tell.”
The second surprise is how personally invested she's become in these guys and their stories. "It can be hard emotionally connecting with an addict, sometimes the addiction wins and the resident makes the wrong choice. In that case they forfeit the program and are out of the shelter too."

Through the BOMF program residents can set goals and gain confidence through their running. The program also helps with job programs, grants, and transportation to work, and even help them get their GED. Once a resident shows his commitment to the program by running and staying clean BOMF is there to help them get back into a productive role as a citizen.

Philadelphia has to be proud of what they have started and how it is growing in Baltimore. “They (residents and non-residents from Philly) were amazed when they came to the Baltimore 10 miler. They had run in the running festival last year, a lot of the guys came down. I think they were amazed at our guys as well as the sheer amount of volunteers that Baltimore has. Because we have so many, we have a huge ratio of volunteers to actual members and we just started a third shelter we are running with and a fourth one is on its way.” Check out the clip below of highlights from the Baltimore 10.

If you would like to get involved with BOMF you can volunteer to run, fundraise, fund race (raise money to get an entry into one of the harder races to get into like Boston or New York), and buy BOMF merchandise. Visit the BOMF website for more information.—Thomas
Thanks Thomas for sharing this great story! Here's a clip from the NBC Nightly News about Back on My Feet in Philadelphia.

Visit msnbc.com for Breaking News, World News, and News about the Economy

I <3 BOMF! I plan to race for them this Sept in the PDR 1/2 marathon :) The organization is certainly a fabulous one and it really does break down stereotypes!

I read about this in Sports Illustrated a few years ago... loved it!

Awesome Thad. Thanks for helping get the word out. Runners are good peeps in general.