A Down Economy Equals an Up in PRs! 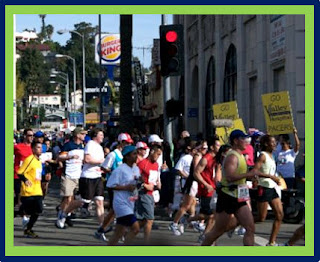 A good friend of mine recently passed me a Wall Street Journal article about runners that puts one more card in my favor for obtaining the BQ (Boston Qualifier) I so desire in the upcoming Marine Corps Marathon in October. According to the article—"Fast Times for Jobless Runners" (Reed Albergotti, 7/8/09)—a trend is emerging. During times of unemployment, runners tend to "amp up their training." As a result their marathon results and just the sheer number of participants in races rise across the country.
As many find themselves without work with few job prospects on the horizon, many runners have been using this newly available time to train for upcoming races. Some evidence even suggests that these better-trained runners are actually helping to raise the level of competition within their age groups. The article proposes that this trend could possibly even have an effect on Olympic-level competition as more elite college athletes decide to continue with their athletic goals instead of trying to look for a job in the current economy. Imagine if this downward economy ends up helping Americans bring home more Gold in 2010 winter and 2012 summer games!
I can attest to that fact that being laid-off and unemployed takes you through all the stages of grief—Shock & Denial, Pain & Guilt, Anger, Depression (reflection & loneliness), Adjusting, Reconstruction, Acceptance & Hope. I think one of factor that keeps many unemployed from getting past the Depression stage is the lack of structure in their day. They're trying to find work, but there are just very few jobs to be had. (The other day there was a line wrapped around a local hobby store for a part-time position.) So, many end up with 12+ hours a day to think about nothing but their unfortunate situations.
A recent USA Today article, "Good mood can run a long time after a workout" (Nanci Hellmich, 6/2/2009), revealed the results of an exercise/mood study done by researchers from the University of Vermont. The study involved two groups of 24 students each. One group road a stationary bike for 20 minutes at a moderate speed. The other group did nothing during the same period. Then the overall mood of each group was evaluated at several intervals: one, two, four, eight, 12 and 24 hours. The students who rode bicycles for 20 minutes at moderate intensity scored significantly higher than the non-exercise group a 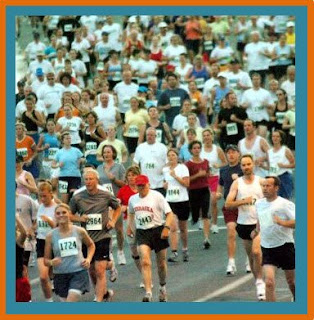 t every interval up to 12 hours. The cool thing about this study is that it showed that exercise has positive effects that can last several hours after the exercise. So, it seems that exercise is beneficial both physically and mentally. This definitely seems to be supported by the runners in the Wall Street Journal article. One runner, Claudia Becque cut 14 minutes of her time setting a PR of 2:44. That's pretty amazing!
Another little nugget of information I gleaned from the Wall Street Journal article is that according to IDEA Health and Fitness (a fitness-industry association) the average gym membership increased 18% this year. Being in a 6-month diploma certification program to become a personal trainer, this is fantastic news to hear!
I am more focused in my marathon training and I do have more time to train, so hopefully this will pay off in October. I'll let you know.
Posted by RunnerDude at Sunday, July 26, 2009

Excellent post! Thanks for sharing the find. Honestly as much as this economy sucks I do think it's having healthy reprocussions in that more and more people are turning to exercise as a stress reliever. I have friends that used to be full on couch potato's trying their legs at 5k for lack of nothing better to do. Perhaps we can turn the obesity problem in America upside down with this craptacular economy? By ridding ourselves of excess fat we are boosting our self esteems... and isn't it confidence that lands us that dream job?

Good luck with your marathon training, I see a PR in your future for sure!

I can definitely relate! I got laid off several months ago which basically lead me to decide to run the Chicago marathon this October. Considering that I haven't run in 10 years the first month of training was pretty tough on me... I don't think I could have handled it nearly as well if I was working full time. It's amazing how much extra time I have for icing, ice baths, stretching, strength training, etc... furthermore, how many working stiffs can afford to go out and do a 14 mile run on a Tuesday afternoon!

Hey Morgan! I think you're on to something there. Also when you feel better about yourself you're better able to dream and maybe do do something you only dreamed about previously. That's what I did.

Hey EZEthan! Welcome to the blog! Congrats on signing up for Chicago! Sounds like you're right on track. Keep me posted on your training.

Hey Adam! You got that right. If you look hard enough there's usually one some where.

Great post, as always. You'll be an excellent personal trainer! Here's to many PRs AND new jobs. I prefer these two go hand in hand:)

Hey Thomas! Thanks for the support and encouragement!