With all the anxiety and nerves that go along with marathon morning, sometimes eating is that last thing on many runners' mind. Oh but what a big mistake. Not eating or eating too little can spell disaster. Even though you may have carb-loaded days before the race and even though you may have attended that pre-race pasta dinner, you'll still need some fresh fuel in the tank come race time. 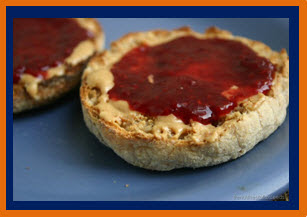 Over the past 10 marathons that I've run, I've learned a few things by trial and error about the pre-marathon breakfast.
1. Make sure your breakfast is high in carbs (i.e., bagels, toast, English 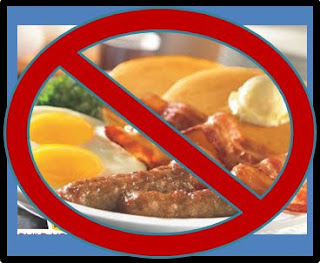 muffins). A little protein is fine such as an egg, yogurt, or peanut butter, but try to stay way from excessively fatty foods. The extra fat may not settle well in your tummy during the race, plus the fat (especially saturated fat) isn't going to provide your muscles much fuel at this stage in the game.
2. Be sure that whatever you eat, it's something that you'd nornmally eat prior to a run. It's a good idea to test out various breakfast foods during your training. This way you get a good idea of which ones provide you the fuel you need as well as which ones may have adverse affects. Never, Never, Never eat something on race day that you've never before eaten prior to a long run.
3. If you're having to travel to a different city for your marathon, be advised that the hotel you're staying at may not have the breakfast foods you need or it may not prepare them the way you're accustomed to. I've found it very helpful to either pack the foods I'll need or purchase them from a local grocery store once I get there. I've also found it very helpful to book a room that has a mini-fridge. This way you can keep your water and sports drinks cold.
4. Be sure to hydrate starting the day before the marathon. No need to over do it, but I've found that sipping on several bottles of water throughout the day is helpful. The morning of the race be sure to drink water with your breakfast. Then drink your last glasses of water or sports drink about 2 hours prior to the start. This will give it plenty of time to pass through your system, giving you time to void any extra before the start. Then drink some more about 5-15 minutes before the start. Just like the food, only drink liquids you normally drink before running. Don't all the sudden decide to try a sports drink before the run, because they're handing them out free.
Posted by RunnerDude at Wednesday, July 22, 2009

Thanks for the insight. I've yet to incorporate a breakfast before my long run but have the feeling that the further I progress with my training I will be needing to. Thanks for the many suggestions on options... will have to book mark this post!

Hey Regina! Most important meal too!

Hey Morgan! Yep, think of it as fuel and you're topping off your tank before your run. When your runs get longer especially nearing marathon distance, you're going to need to make sure your glycogen stores are full to capacity and then replenish them along the run.

Mmmmm toast. I have found that dry toast works for me. I am trying all different kinds of things though prior to my next marathon.

Thanks for all of the info!

Hi, I just stumbled across your blog as I saw a recent news article about it. Am still finding breakfast tough to incorporate into the long runs I do on Sunday mornings. Liked the idea of english muffin, though, so maybe I'll give it a go!

Hi Kirsten! Welcome to the blog! Give that English muffin a try. Maybe the first time just eat a half and see how that works for you and then eat both halves on the next run. I may take some gettin used to, but I think eventually you'll find that you'll have more energy on your run. Let me know how it goes.

Hey B.o.B! Try a little peanut butter on the toast. That will give you a little protein. Let me know what things you test out and how they worked for you.

I seem to be stuck on the same thing every morning - bagel w/peanut butter & yogurt. Works great for me! I also drink either water or a sports drink depending on how far I'm running.

Hey Gina!I'm the same way. I usually find something and stick with it. I need to experiment with drinking some sports drink before the run too. Thinking getting some electrolytes in me early may help.

Hi! I write the fitness blog Body By Bond for the Chicago Tribune Website www.Chicagonow.com
The Chicago Half Marathon is tomorrow and I found your post to have great suggestions. I have posted a link to it in my post today. Thanks!

Hi Ashley! Welcome to the blog! Linking me to your post is awesome! Thanks!