During a recovery jog between intervals, Dena a running buddy of mine was telling me about a 10K race she had run the previous weekend. She said she felt awful at the halfway mark and she wasn't sure why. She knew that if it were a marathon she'd be blowing through those miles. She thought it had to be in her head. Somehow her brain was not letting her do what she knew she could do. This sounded like a great post for RunnerDude to investigate. Here's what I discovered. 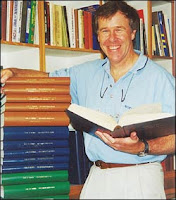 Most runners already know they're a "head-case," but now there's science to prove it! You know that feeling towards the end of a race when it seems as if you're about to die and you can no longer control your legs?(Sometimes for me, that's before the race even starts.) That feeling could be all in your head. To be more specific, in your brain. A relatively new idea proposed by Dr. Timothy Noakes theorizes that the brain sometimes acts like a big brother during prolonged strenuous exercise. When "Big Brother" senses the body's normal operating system (homoeostasis) is getting out of whack, it's main priority is to protect his little brother—the heart—so Big Brother slows everything down by fatiguing the muscles. Noakes called this process The Central Governor Model. Kind of like a governor that's but on a school bus engine to keep it from going over a certain speed.

For decades most scientists, trainers, coaches, and runners have believed that the Cardiovascular/Anaerobic/Catastrophe Model was responsible for the fatigue. British physiologist and Nobel Prize winner Archibald Vivian Hill (he went by A.V.; wouldn't you?) proposed this model back in the 1920's. Basically he believed that a lack of oxygen to the muscles, a build up in blood acidity at your muscle cells, or both occurring at the same time was responsible for the fatigue.
Since Noakes proposed his new theory, more and more scientists, coaches, and runners have begun to question the original thinking. Basically it all comes down to fatigue. We know the symptoms, but what's causing them?" Is it a lack of oxygen to the muscles or is the brain constantly monitoring the body and acting as a governor by purposefully fatiguing the muscles when it fears the heart is in danger. The two main questions being asked are:
If Noakes' model holds true and the fatigue is caused by the brain sensing a disturbance in homoeostasis, then a runner can tell the brain to "stop it!" More technically, the runner can recognize what's happening to him/her and make a conscious effort to override his/her subconscious. I didn't know what I was doing at the time, but when I ran the Baltimore Marathon in 2004, I think I did this exact thing to avoid bonking. At about mile 21, I started to get very fatigued. I was well hydrated, and had been taking gels regularly, and I hadn't gone out too fast like I usually do, so I was baffled as to why I was feeling fatigued. I remembered reading somewhere that if you feel fatigued, you should try speeding up because it will use different muscles allowing your fatigued muscles to recoup. So, I purposefully told myself to speed up and as a result, the fatigue dissipated and I ended with a good time and actually felt good after the race. I'm not sure that was The Central Governor Model in action, but it sure does sound like it. 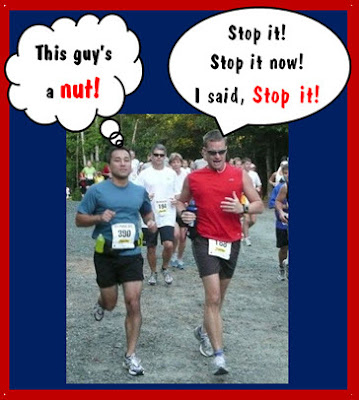 So, the next time you feel fatigued during a race, tell your brain to "Stop it!" Of course the runner beside you may think your a nut case, but it'll be worth it.
Now, keep in mind that Noakes' model doesn't explain every case of fatigue. Sometimes fatigue may be a result of such things as increased levels of potassium which can hinder muscle contraction. And if you haven't pre-race-carb-loaded and you don't continue to refill your glycogen supplies during a marathon (especially if you're running more than two hours) then Hill's original theory could very well be the cause.
If you want to read more about Noake's Central Governor Model and more about the brain and running, check out the following books:

The Lore of Running (Dr. Timothy Noakes, Human Kinetics Publishers; 4 edition, 2002)
"Now revised, expanded and updated, Lore of Running gives you incomparable detail on physiology, training, racing, injuries, world-class athletes, and races. Author Tim Noakes blends the expertise of a physician and research scientist with the passion of a dedicated runner to answer the most pressing questions for those who are serious about the sport... Lore of Running is not only the biggest and best running publication on the planet. It's the one book every runner should own."—Amazon

Brain Training for Runners (Matt Fitzgerald, (forward by Tim Noakes), New American Library, 2007)
"Based on new research in exercise physiology, author and running expert Matt Fitzgerald introduces a first-of-its-kind training strategy that he's named "Brain Training." Runners of all ages, backgrounds, and skill levels can learn to maximize their performance by supplying the brain with the right feedback. Based on Fitzgerald's eight-point brain training system, this book will help runners resist running fatigue, use cross-training as brain training, master the art of pacing, learn to run "in the zone", outsmart injuries, fuel the brain for maximum performance, and more."—Amazon
Posted by RunnerDude at Thursday, July 02, 2009

Yep, I'm a total "headcase" too. Good to know I'm not alone!

Hey Teamarcia! Welcome to the blog! Maybe we should start a support group. LOL!

If we formed a support group for this dilemna, then I would have to be a senior member. I am reading Brain Training where this is also discussed and it is amazing how the brain tricks you in to thinking along the traditional thoughts of fatigue. I'll have to remember to speed it up when fatigued next time (boy my body will love that theory!). I would love to hear more and more on this topic, as would any runner, when "fatigue" or the governor kicks in. Amazing stuff. Great post!

Hey Jeff! Yep, that's a great book. Gives you a whole different perspective on training. The Lore of Running is great as well.

The mental aspect of running has always intrigued me. I use my heart rate to determine if I'm truly in trouble and should stop running, or if it's just mental-if the heart rate is low, I'll keep going. And speeding up does work, at least for me! I would like more posts on this subject!

Hey Tanya! That's a great idea to use your heart rate to help determine if it's your head or your body. I plan to keep reading on this topic, so look for more posts to come! Thanks for the support!

I agree, alot of it is in your head!

This is kinda like how during the last mile of a long run I feel like I couldn't possibly run any further. The end is near!

This is totally off topic but along the same lines of "it's all in your head".

You're driving down the road 10 kilometers from home and you have to poop. As you get closer and closer to home it gets worse and worse all the way up until you are in your house and reaching for the toilet seat - at this point it's unbearable! But, it would have all played out exactly the same way had you been 26.2 miles from home, you wouldn't have pooped in your pants at 6.2 miles with 20 to go!

My favorite part of this post: At about mile 21, I started to get very fatigued.... I was baffled as to why I was feeling fatigued.

Great post. Glad I could be an inspiration - LOL.

haha that's totally me, I'm always yelling at my brain during runs! Very interesting theory. I keep meaning to pick up that second book, I need to read it before my next marathon!

Hey James! Interesting analogy there. LOL! But oddly enough I can sort of relate. LOL!

Hey Dena! Remind me when I'm complaining at mile 21 on a long run that I'm in pain because I'm at MILE 21!! LOL

Very good post. I'm glad you also noted Matt Fitzgerald's excellent book "Brain Training for Runners". I just read it, and got a lot from it.

With regards techniques to overcome fatigue in a marathon I find it very helpful to: 1) Run with a pacing group that targets completion in a challenging - but nevertheless personally achievable time (do ten Yasso 800's to benchmark of your fitness and determine an achievable completion time); 2) Arrange as many family and friends along the course as possible to give you verbal and pre-planned nutritional support (I consumed over 10 Crank eGels in my January Boston Qualifying Houston Marathon run!); 3) If you're still with your pacing group in the final 3-miles, and you feel good, gradually pull-ahead of the group then RACE the final thrilling miles!!

I am a running headcase. Even worse, a triathlete headcase too. :)

Super interesting post. I am totally going to test this out.

"Total Head Case" = "Single Track Junkie". The mind really messes with you when you're doing an ultra, I tell ya! Luckily, I'm more stubborn than that voice in my head. ;)

Hey Jo Lynn! I bet that voice in your head doesn't have a chance!

Hey Amanda!Thanks! Sure worked for me. I think the key is recognizing when the fatigue is just starting and trying to override your brain early on.

did this this morning, and oddly, my legs seemed to carry me through.

Hey Ms. V.! Awesome! Glad it worked for ya. Another tool in your arsenal.