Returning to Running After an Injury? 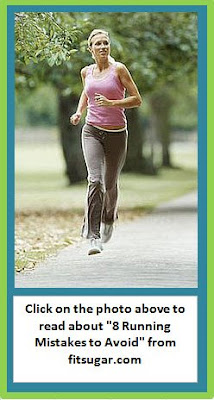 Picture in your mind a runner who has been recovering from an injury sitting on the exam table talking to his doctor. The doctor says, "Well, Joe Runner, you're healed. You can run again." Joe Runner gets a huge grin on his face slips on his running shoes he's been hiding under the table and strips off his shirt and pants to reveal running shorts and a singlet. He says "Thanks Doc!" as he runs out of the room at lightening-bolt speed. If you're a runner, you're probably chuckling and thinking, "Yep, that would be me!"
If you've had a running injury, you're well aware that the recovery period can be more frustrating than the injury itself. Imagine all of the sudden not being able to do the exercise you love the most—running—for several weeks or sometimes several months? A few years back I was told by my doc not to run for about three months while a heel fracture mended. I went just about bonkers during those long three months. I was gradually able to add back some exercise such as walking and using the elliptical, but it just wasn't the same. Luckily my doc specializes in sports medicine and is a long-time runner himself. After my recovery, he warned me against attempting to start back at the same level of running as before the injury. He said it would take time to get back to my previous level of fitness and if I didn't come back gradually, I could risk re-injuring my heel or possibly even injuring another part of my body.
It was hard. Damn hard, but I listened. That recovery period was during January, February, and March of '07. By the end of April I was getting back to my regular base mileage. Late May I ran a 5K, just for fun (not an all out effort), but it helped me mentally to "get back in the game." Funny thing is that by late summer, I was running faster and better than ever. That summer, I finally broke 2o minutes in a 5k and I set a PR for the half marathon (1:30). I firmly believe that my forced time off, allowed my body to recover not only from the heel fracture, but also allowed my entire body time to recoup.
Toward the end of my recovery period, I was walking a lot. I think my longest walk was 6-miles while my running buddies did our regular Saturday long run. The walking I did actually made me sore! Come to find out, you use different muscles when you walk. I believe all the walking I was doing helped to make me a stronger runner.
So, if you're injured, listen to the doc and allow your body time to heal. Also, if you're able to participate in other activities such as water running, using the elliptical trainer, cycling, swimming, or walking, do so. And don't think of it as, "well this is all I'm able to do." Think of it as an opportunity to let your injury heal as well as a time to strengthen muscle groups you don't normally use ultimately making you a stronger runner.
When it's time to get back to running, RRCA (Road Runners Club of America) recommends that you...
• phase out of the alternate activity, don't just jump right into running.
• have 10 miles of pain-free walking a week before returning to running.
• mix some walking into your running for a gradual return to full running.
• initially run at 25-50% of your pre-injury pace. Gradually work your way back to full speed.
Posted by RunnerDude at Tuesday, July 14, 2009

Email ThisBlogThis!Share to TwitterShare to FacebookShare to Pinterest
Labels: after running, injury, recovery

so a 22 mile 9000ft mountain race after a 10 month lay off and 1 months training on flat roads is a bad idea? Wish you posted this last week

Hey Anthony! Better late than never? LOL! Oh many, I hope that 22-miler went well for ya.

Hey Readers!
Check out Anthony's post on his blog about his recent race. There's a great video he's created to go with it.
http://middlepack.co.uk/2009/07/wasdale-fell-race-2009/

I'm still waiting for the "after the injury" part.

Imagine sitting in the Doctor's office and he tells you that you can not run, forever. Now that really is bad news.

You wrote this especially for me, didn't you? You're so nice! ;)

phew, if you were writing about Jo Lynn, then maybe you weren't talking about me LOL. Yep, been there, more than once :(

Hey Shawn! Yep, that would definitely be a bummer. Might also be cause for a second opinion.

Hey Jo Lynn! I pulled up your profile picture as I wrote the post. :-)

Hey Mel! I think we're probably all guilty of letting the exhuberance of getting well take over when we start back to running. I know I sure do.

I understand this better than most right now!

I'm recovering from a torn ACL. It wasn't a running injury – I tore it on the basketball court – but I'm finding being patient is the hardest part...

I am doing a lot of walking right now, and it's helping. If you're hurt, take it slow. Your body will thank you, believe me.

Hey David! Sorry to hear about the torn ACL. Know that must be hard, but sounds like you have the right attitude about it. Hang in there. Keep me posted on your progress.

Yeah, rest up. I MAY have accidentally went out after a strained hamstring and re injured it!