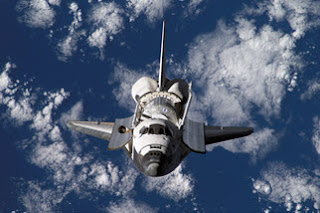 Several weeks ago I was contacted about trying out and reviewing a brand-new hydration product called The Right Stuff. The first thing that came to my mind was the movie by the same name about the astronauts. Come to find out, the science behind this new product was developed by NASA to help astronauts fight dehydration while in space.
The main difference between The Right Stuff and other sports drinks on the market is that its main and only purpose is hydration. According to The Right Stuff, "many sports drinks contain too much of The Wrong Stuff; carbohydrates that—when added to the normal intake of carbs by athletes— impairs optimal electrolyte performance." The Right Stuff has been scientifically shown to actually increase rehydration with its optimal blend of electrolytes without carbohydrates. The formula uses all natural flavors and citric acid (to help cut the saltiness) and is lightly sweetened with a small amount of sucralose (non-carb sweetener otherwise known as Splenda).
No carbs has its benefits. Many runners are unable to use sports drinks because they cause gastrointestinal problems during their run. This is usually caused by the carbohydrates added to the drinks. Often these runners will result to using only water or nothing, but then they're not getting the electrolyte replacement they need, especially on a long run or when they're running in the heat. With The Right Stuff, runners get the optimal amount of electrolytes and they can control the amount of carbs they digest and when they digest them by using a sports gel or one of the other products on the market such as Sports Beans or Gu's Chomps (just be sure you're using ones without added sodium). 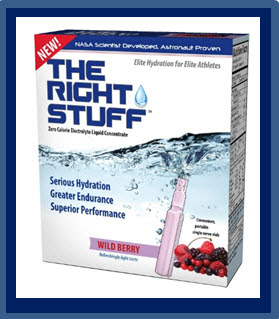 The Right Stuff comes in three flavors—citrus blend, wild berry, and unflavored. The product is packaged in single-serve 16.5ml (0.55 fl oz) vials that are available in 3-ct and 10-ct boxes. The vials are made of recyclable plastic twist-off top packages. You simply squeeze the contents into at least 16 ounces of the beverage of your choice. The packages are a little pricey compared to more traditional sports drinks ($8.99 for the 3-count vial package and $26.99 for the 10-count vial package). However, I think they're currently running a 10% off special on their website.

I tested out The Right Stuff on one of my regular long runs and a tempo run. I was sent one vial of each flavor and I chose to use the citrus blend and the wild berry. The vials are easy to use. Just twist the top and squeeze it into 16oz of water or what ever drink you prefer. I used water with the citrus blend. I sipped a little on my way to meet my running buddies and was surprised at its salty taste. The citrus flavor was very subtle. However, when I started the run and thirst started to set in as well as the heat, I really didn't notice the salty flavor.
During the run, it worked well in helping to keep me hydrated. I sweat profusely during a run, any run, no matter the time of year. During the summer it can become a problem resulting in calf muscle cramps from a sodium imbalance. Just before being contacted about testing out The Right Stuff, I was about ready to try some type of salt tab to see if that would help my situation. Now I don't think I'll need to go that route. On both runs, I sweated as normal, but never felt dehydrated nor did I have problems with my calf muscles seizing up. 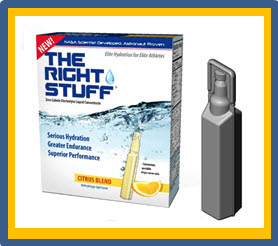 On my tempo run I tried added the wild berry to some berry-flavored sugar-free Crystal Light and it really helped cut the salty taste. I had another positive experience with The Right Stuff on this run and it was an even hotter day than on the long run.

I think the thing I like the most about The Right Stuff is the ability it provides you in controlling your carb intake. I also like knowing about the research that has gone into the product for astronauts which is now being shared with athletes. But don't take my word for it, [click here] to check out some other testimonials about The Right Stuff. To find out more about The Right Stuff and how to order it or where to buy it go to http://www.therightstuff-usa.com/.
Posted by RunnerDude at Tuesday, July 07, 2009

sounds great, but too rich for my blood. I think that is way too pricey for what it is, just my opinion. I don't have any problems with carb intake and running; I seem to have an ironclad stomach.

I'll stick to my nuun and gatorade.

thanks for introducing the option though.

why wouldn't do you stray away from added sodium in your gels or gu's? I too sweat profusely and have just upped my long runs past 10 miles and my duration is over 1:30 hours in Texas heat. I thought i should be looking for a gel or gu with alot of sodium due to excessive sweating.

Hey Regina! It is rather pricey but it's only been on the market for 4 weeks so I'm hoping the price might drop some once it gets established.

Hey Anonymous! I suggested using gels without the extra sodium because The Right Stuff contains 1625mg per serving. Traditional Gatorade Orange only had 25mg of sodium per serving and PowerBar 4X Sodium has 200mg of sodium per packet. So together that's only 225mg of sodium. If you're using The Right Stuff you're getting 1400mg more sodium than Gatorade and PowerBarGel 4X Sodium combined. Just didn't think more than that was needed. If you're not using The Right Stuff, however, and you sweat profusely like you and me, then it's a great idea to get the gels that have the extra sodium. Just didn't want the readers to overload on sodium by using both The Right Stuff and the sodium-packed gels (could end up being around 1850mg of sodium). It's still a good idea to use the regular gels without the extra sodium as a source of carbs during your run.

Runner Dude, it sounds similar to Nuun. I have yet to try either but keep hearing good things about Nuun. If you run over (pun intended) to my blog I have started posting various product reviews from other bloggers. I am going to add this one.

Hey B.o.B! I've heard of Nuun too but have yet to try it. Need to. Thanks for adding this review to your blog. I'll definitely check it out!

I'm becoming a nuun fan too! I just wanted to comment and say when I heard the "right stuff" I didn't think of the movie, but instantly thought of the New Kids on the Block, haha.

Hey Heather! LOL! Forgot about that. Sad thing is you were probably just a kid when they were popular. I was out of college! LOL!! I feel old.

Yes, I was at that age where I was pretty much obsessed with them. (10 or 11 I think?) My old new kids on the block fanny pack could give a fuel belt a run for it's money.

Huh, that is interesting stuff. I honestly think that I may try it! Thanks for the write up.