We Need a Honey Bun Run!

The area I live in—Greensboro, NC and the surrounding towns of High Point and Winston Salem—is known as the Triad. The Triad is home to quite a few famous personalities such as singer Chris Daughtry, American Idol winner and Broadway star Fantasia, authors Orson Scott Card and Michael Parker. We're also the home of the Krispy Kreme doughnut, Vick's Vapor Rub, and now I've discovered we're the home of The Honey Bun. I discovered this awesome fact while reading my blogger buddy (and fellow runner) Eddie Wooten's blog—Running Shorts. Eddie has a great idea for celebrating this hometown treasure. Read on as Eddie tells more about the Honey Bun and his idea to honor it. 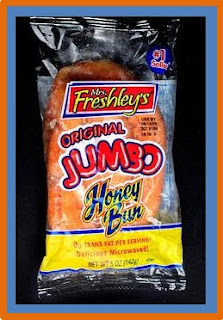 A Honey Bun Run is waiting to happen in Greensboro. We have all sorts of road races that honor our history (Cannonball Marathon), holidays (Greensboro Gobbler and Resolution Run) and worthy causes (Women’s Only 5K and Imagine How 10K).

But we need a Honey Bun Run.
Here’s why: The gooey, sticky honey bun, in all its saturated-fat glory, was invented right here in Greensboro.
A rare vending-machine trip and brief flirtation with Mrs. Freshley and her Original Jumbo Honey Bun led me to find that the real Original Honey Bun—the first one—was baked by the late Howard Griffin.
When Griffin was a boy, his mother baked small, fried pies and sent the young ‘uns downtown to sell them at lunchtime. So the flour, sugar and aroma soaked deep into Griffin’s veins. After he and his wife married, he developed a formula and began making honey buns in the basement of his home on Walker Avenue in the early 1940s. The city didn’t care for him selling them out of his home, so he built the Griffin Bakery on West Market Street.
How do we know Griffin was first?
“He had a patent on the machines,” says Mary Griffin, his former daughter-in-law who lives in Elon. “Nobody else had anything like that.”
The Food Network gave him credit in one of its shows, too.
Griffin went on to get his company listed on the stock market, which was pretty good for a man with a junior high education.
“It’s the most outstanding thing he did in his life,” Mary Griffin says. “He achieved something he never thought he would do.”
Griffin sold the company to the Flowers Food company, which produces the Mrs. Freshley brand. He died in 1980 at age 65.

A quick Google search didn’t turn up a “Honey Bun Run.” So like Griffin—and because of Griffin—we can have something original.

I’ve done my part, years ago. I’ve chased countless honey buns with Mountain Dews on morning breaks in the tobacco fields.
And now I can’t imagine why a honey bun wouldn’t go down just as easily after I cross the finish line at the Greensboro Honey Bun Run.—Eddie Wooten
I'd love to know what treasures your hometown's known for that would be good to honor with a run.
Posted by RunnerDude at Monday, September 07, 2009

I second the motion. A Honey Bun Run, out in the sun, would be fun from starting gun till we're done. Maybe there could be costumes - I'll dress as a ... nun, I guess. Or Spiderman.

Thanks a lot, Thad! You helped me so much in the beginning, and I really appreciate the time you took to answer my questions. You are one of the first people who really inspired me to get out there and run! Thanks again!

I love the honey buns! I'd make the drive up for that one! Let's see, here in Myrtle Beach, i think we need the "mini golf capitol of the world" 5k. Maybe run carrying a putter and run under a giant windmill for the finish line? LOL!!

I don't think I've ever had a noney bu, but it sounds delicious!

Even more similarities: I come from an area in NY called the Triple Cities and our local specialty, Speedies, was also featured on the Food Network.

Hey Southofthecliff! A barefoot nun at that! LOL!

Hey Tammy! Thanks, but you did all the work. For the readers that don't know...Tammy just ran her first 15 mile race and finished under her projected time. Awesome job Tammy!!

Wow, what memories-I think I ate one every day at lunch through junior high school. They were just so gooey and sweet! I'm not even sure they sell them here in California any more-I haven't seen one in years..

Hey Tanya! I'll have to ship you some! Ever had a moonpie? Nothing like an RC Cola and a Moon Pie. Okay, I'm dating myself really badly here. LOL!!

OMG - stale honeybuns from a vending machine or gas station... there's nothing better. I'd run a race for those. You need to talk to John & Scott at Off N Running about doing one of these..

In my college town (Ames, IA) there is a Krispy Kreme run that combines your time with how many donuts you eat.