Runners: The Power of Positive Imagery 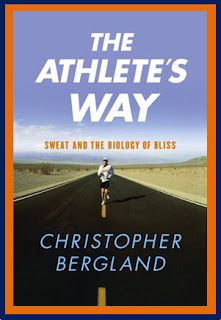 I've recently been reading The Athlete's Way: Sweat and the Biology of Bliss by Christopher Bergland (St. Martin's Press, 2007). Bergland is a triple Iron Man record-breaker and the son of a neuroscience researcher. In his book he shares the idea that exercise is as much about the mind as it is about the body. He believes that running makes athletes healthier physically but maybe even more, it helps make them happier, smarter and better adjusted individuals.
Bergland provides steps for how to develop an athletic mind-set that include setting goals, getting inspired, monitoring your mood, and using positive imagery. In the latter (positive imagery), Bergland shares a unique technique he uses as a visual reminder of all the hard work he's put into his training. 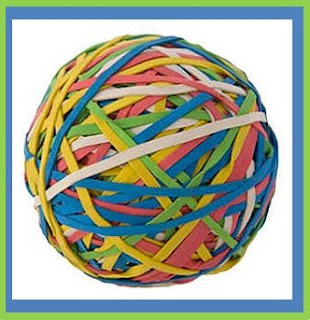 Each morning Bergland puts a new rubber band on his wrist as a reminder of his commitment to his training. Before going to bed, he removes the rubber band and adds it to a rubber-band ball. Bergland says the ball reminds him of his "investment." Those rubber-band balls travel with Bergland to his races to remind him that he's trained hard and is prepared for the race.

What types of positive imagery do you use to remind you of your hard work? Send your positive imagery ideas to runnerdudeblog@yahoo.com.
Posted by RunnerDude at Thursday, September 03, 2009

As my long runs get longer, I'm very aware of the mind's role in distance running. What a great idea-the rubber band ball. I just got my confirmation email for my entry in my first marathon, and it's propped up on my dresser where I see it every morning to help motivate me in my training.

Hey Tanya! That's awesome! Which marathon are you running?

That rubber-band ball is a really neat idea. I think I remind myself of the races I've completed then, when each race comes around next year, I aim to improve. I know to do that I need to train.