The following is the awesome story of Noah's amazing transformation from overweight, sedentary dad to marathon-running; boot-camp workout member; and flag football, soccer and T-ball coach. Oh yeah, did I mention he also lost 60 lbs in 5 months! Here's Noah's story in his own words. 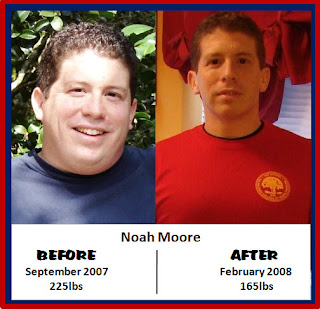 Six years ago when my wife was pregnant it was one of the happiest times of my life, it was also the time of my life that I gained the most weight. During that time I ballooned to 255 pounds (at 5’ 6” that is a lot of weight to carry around).

When my son turned two I decided to try to get back in shape. I tried working out, but I found that all I was doing was exercising to eat. I dropped a few pounds, but most of it came right back.

Two years ago at 235 pounds and 36 years old (and after running the Cooper River Bridge 10k in 1 hour and 17 minutes) I made the choice to eat right and start seriously running.

So with all this in mind, I ran my first marathon on Saturday, February 14, 2009 in Myrtle Beach , South Carolina , and finished! It was an amazing experience. I trained for this race for several months, Jen (my wife) and Peyton (my five year old son) helping me on all of my long runs (14, 16, 18 and 20 mile runs) and supporting me throughout my training. What a great team!

The start was a little chilly at fifty degrees. Jen and Peyton woke up with me at 4:30am (they had been such troopers putting up with my need to sign up for so many races over the past two years). They drove me to the starting line where I waited with six thousand other runners and walkers. I found a nice warm spot with about twenty other runners next to a generator until the start of the race. At this point I was feeling nervous, but really happy. I talked to this guy who was running his ninety-ninth marathon. When I told him that this was my first marathon he acted more impressed than I did when he told me how many he had run. What a crazy bunch of people I have joined...

Miles one through five were perfect, not too fast and not too slow. Miles six through ten felt great - I was a little ahead of my pace. I was thinking to myself that this is a piece of cake! Miles eleven through thirteen were wonderful. Mile thirteen was a little hard as the runners of the Half Marathon approached their finish line (this is a little daunting when you know you have another half to go). Fourteen and Fifteen seemed fine and I was now counting down the miles (only eleven miles to go!).

At mile sixteen the first sign of trouble hit; my left calf started to cramp. I kept thinking, "This is not happening.” I slowed a little and the cramp seemed to go away. Just then I hit mile seventeen. I could see Jen and Peyton standing in front of our hotel waiving and smiling. What an incredible feeling that was. I was filled with so much joy. Jen came out and gave me a quick hug and kiss. Peyton watched me with big bright eyes and it made me feel like a hero! This was the best.

Miles eighteen through twenty were getting hard. I felt great from seeing Jen and Peyton, but I was worried about the cramps. I drank and ate everything I could throughout the race, but it was not enough. At mile twenty-one my legs cramped up again. This was the worst pain I had ever felt. It felt like marbles were rolling around in my calves. I slowed down and I tried to change strides, but nothing seemed to help. As I came to mile twenty-two I was thinking "Why did I do this? What is wrong with me? What made me think I could do a marathon?" It was at this point that I felt that I could go no further; I wanted to quit. I saw the first aid station and as I passed it, another runner asked me if I need to go back to get checked out. I made the decision to go on. I knew that if I stopped I would never be able to continue running (this is how I have felt for the past few years as I dropped a over ninety pounds – if I stopped, I would never be able to get going again).

Miles twenty-two through twenty-four are a blur. I know that I was thinking about Jen and Peyton waiting for me at the finish line. I was thinking about all the work I had put in for this race and the support Jen had given me while I went running for hours at a time. Then I saw it - the marker for mile twenty-five. At this point I knew I could finish the race. Time did not matter anymore; it was all about finishing the race.Mile twenty-six flew by until I saw the final shoot for the last two tenths of a mile. I had no idea I would be so emotional about finishing this race. Then I heard my name over the loud speaker and at the same time I saw Jen and Peyton waiting for me at the finish line. Jen had tears in her eyes and that sent me off the deep end. This was, at once, one of the most incredible and most painful moments of my life.

Finishing the race in four hours and twenty-seven minutes was not the goal I had originally set. But the feeling of accomplishment, pride and joy of finishing the race was better than anything I could have ever imagined.

That race was a few months ago and my decision to make this commitment was over two years ago. My whole family is healthier. The last time we ordered pizza was for the Super Bowl (this is a big improvement from when the pizza guys new us all by name). I am now able to coach my son’s sports teams (so far it has been flag football, soccer and now T-ball). We are taking a family vacation to DC in October for the Marine Corps Marathon. I am running the marathon, my wife is running the 10k and my son is running the 1 mile kids run!—Noah from SC.

What an awesome story. I know Noah's family and friends are so proud of his transformation. The best thing out of all of this is that now he'll be able to coach his son's teams for many more years to come. Maybe even the grandkids! Be sure to check out Noah's blog—Moore On Running.
Posted by RunnerDude at Monday, September 07, 2009

What a great story. Way to go Noah!

Great job Noah and way to be a role model for your family!

I love these posts you are doing about other people and that is really great about Noah and what he is doing in his family as well. Thanks for sharing! :)

This is a really amazing story. Well done, Noah! Keep it up! :)

Such an inspiring story. Keep it up Noah!

What an example Noah is to everyone. I hope that he keeps telling his story. You are proof that it can be done, so many people have hundreds of excuses why they can't.
Best wishes in the Marine Corp Marathon.

All these stories a great "runnerdude". And what a great story too!

Thanks for the comments!

Its nice to be part of this. I have been inspired by so many of the stories I have read on this blog. Its amazing how running has impacted so many lives.

That's a great story. The best thing is that now Noah is setting an example for his son, both by living a healthy lifestyle and showing him that it's never too late or too hard to follow your dreams. Great story!

That is awesome. I wish my family was as understanding about the early wake up calls!

Its from our local CBS station. They did a spot on me raising money for the Injured Marine Semper Fi Fund.

Thanks for the update Noah! I just posted an update about you. Good luck with your race and fundraising! You're gonna blast that race!