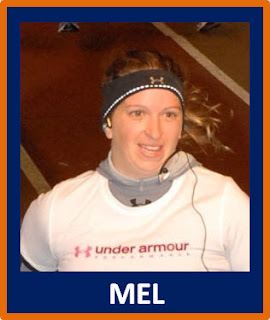 Mel has been a loyal reader of the blog for several months and I always enjoy her comments. Mel has an amazing 2nd-chance story of of how she regained her life from mysterious seizures. Here's Mel's story in her own words.
Running. It was always an ugly word for me as a child. For me, there was nothing positive or fun about running. What could be so fun about breathing heavily, working up such a sweat, and travelling a distance that should be done by a vehicle. I remember my dad running when I was a child and have very faint memories of him running a marathon in 1982 at the age of 32. His athletic genetics certainly weren't passed down to me; my mom and gym teacher would probably agree.
As an infant, I had two febrile seizures induced with high fever. I was on medication until I was 5 and had no other seizures. So, by all accounts, I was fine, and I came off the medication. No other issues, or complications, I was no different than anyone else.

My son was born in 1998, when I was 20. He's my little miracle, as he was conceived while I was on birth-control, but I believe he had a reason for being here, and am so thankful everyday that he's in my life. When he was a year old, I was just going back to work from maternity leave, and going through difficulty in my relationship, and ended up being a new first-time-single-working mother, at 21. All of this combined was enough to make my seizures come back with a vengeance. At first, I didn't understand what was happening, as my two previous seizures occurred as an infant. I went to my doctor, described what was going on, and he immediately contacted the Ministry of Transportation and had my drivers' license taken away. Don't feel sorry for me, all of these experiences have made me the person I am today—better than before, taking nothing for granted, strong, positive and determined. 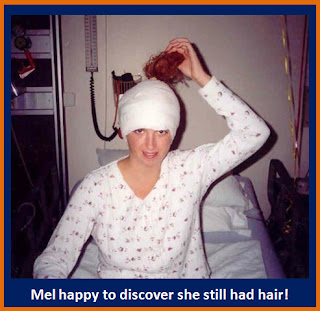 Seizures quickly became as much a part of my daily routine as brushing my teeth in the morning, sometimes reaching 30 or more per day. Over the next 2 years, five medications later, including an allergy to one of them, three doctors, a battery of tests, disability from work, and having to take a bath with someone in the bathroom for fear of drowning, I was given a glimmer of hope that life would return to normal. I was told that the cause of my seizures was likely stress-induced, and that I was a good candidate for surgery. My right temporal lobe had turned into a 3 inch long mass of scar tissue, and with removing this, I'd have an 80% chance of being seizure-free! The other statistic was a scary one—20% chance that I may not wake up, or remember my friends, or worse, my family. I didn't even contemplate the decision, Sept 12, 2001 was my surgery date. I wrote a letter to my son, who was almost 3 at the time, to let him know how special he was to me in the event that I wouldn't be able to express it to him post-surgery.

It was like the doctor went in and flipped a switch. I used to count in days being seizure-free, but am now counting years! This September, will be 8 years since my last seizure! I've experienced some memory loss during those years (sadly, I have to rely on pictures for a lot of my son's first.... like his steps, etc.), but a small sacrifice to have my life, freedom and independence back, and being able to take a bath by myself! :)

I had also been a smoker (a very bad habit I had), but something clicked in late August, 2005. I had my "awakening moment" when Peter Jennings passed away of lung cancer, and less than a week later, Dana Reeves was diagnosed with lung cancer, and didn't even smoke! What the heck was I doing! I've had life changing brain surgery, and I'm smoking? I picked my quit date, Sept 6th, and stuck to it. Since I was mentally prepared for the challenge ahead, and had amazing reasons to quit, I did.

Like many have experienced, I started gaining a bit of weight. Although I exercised sporadically, it wasn't enough. Working with computers, being a stats-oriented person, a gadget-girl, driven by visual results, and technical, I spotted the Nike+ iPod kit on May 5, 2007, and have been running since! I never thought that running would become an addiction,! After the first few runs, I called my mom to let her know, and she was in shock. In fact, last summer, when I went out to visit her, I went for a run. I'm still convinced that she drove along the previously discussed route to see if I was "actually" running. After a few months of running, when I was really starting to get more into it, I picked up a Garmin, showed my dad all my running gadgets, and he was shocked at how much times have changed since his running days.

In just over 2 years, I've done some 5k's and 10k's, a 15k, a Half-Marathon, and a 30k. I'm happy knowing that I left everything out there during my marathon attempt this past Mother's Day, even though it just wasn't my day. Now I'm training for a triathlon!! Running for me is a way to keep stress levels under control and my head clear, as well as do and see things I never thought I'd ever achieve! I remain committed to never letting stress ruin or control my life again. —Mel in Canada
Mel, you truly inspire me. I can't wait to see what other running and life goals you conquer! Be sure to check out Mel's blog Second Chances.
Posted by RunnerDude at Monday, September 28, 2009

Thanks RD! Still loved the idea to share these with everyone, it's incredible to see how one foot in front of another can change or help someone's life :)

What a fantastic story

Mel continues to be an inspiration to all of us!

I love these posts. Such a great story! I love the ponytail picture!!

Mel, I am in awe of your running (and life) story! Thanks so much for sharing this with us...

This is seriously such an amazing story! Thanks for sharing and inspiring us all!

And thanks RD for having so many fantastic stories for us to stumble upon!

Hey Mel! You are most welcome and thanks for sharing your story!

Wow, Mel's story truly epitomizes the saying that the human spirit is boundless. Thanks for the inspiration and keep shooting for the stars!

Love Mel! And her story keeps getting more and more amazing... Her son Terron completed his first Triathlon this weekend, 2 weeks after his Dad died.. Tough kiddo..

Mel is amazing!! There are so many great things headed her way.

Wow, just wow...what an amazing story. Thank you for sharing. It's stories like this that help me maintain a reasonable view of life and keep things in perspective. You are truly an inspiration! Way to go!

Ive come to "know" Mel through her blog, and her story really is an inspiration!

Amazing story! Thank you for sharing it, RD! And best of luck to Mel with tri training! Even though it sounds like that will be cake. ;)

Love Mel, she's always an inspiration -- thanks for featuring her story. She's terrific!