Childhood Obesity On the Rise 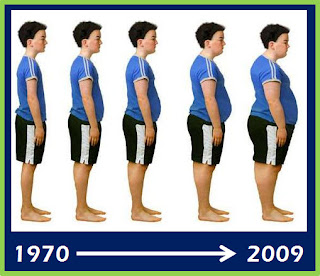 In 2004, the National Center for Health Statistics showed that 66% of US adults between the ages of 20 and 74 were overweight or obese. According to Johns Hopkins Bloomberg School of Public Health, the Agency for Healthcare Research and Quality, and the University of Pennsylvania School of Medicine, most adults in the US will be overweight or obese by 2030. 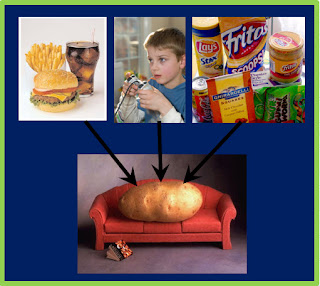 There are a lot of possible culprits to blame for this epidemic of obesity in the United States. The dawn of video games (remember Pong in the 70s?! Man I'm old!), personal computers, the remote control, and 24/7 television programming have all contributed to more sedentary livestyles for children. The increased focus on testing has decreased or eliminated recess and even PE in many elementary schools across the country. Refined grains and the onslaught of packaged cakes, cookies, crackers, and other snacks have flooded the supermarkets. And...portion sizes are grossly out of proportion.
When I was a wee lad, a meal at McDonald's (the one in our town was a drive-up, it had no inside seating) consisted of a hamburger, fries and a soda. The portion size of that meal was comparable to the size of a regular-sized Happy Meal today! So even though it was a fried burger, fried potatoes, and a regular Coke (they didn't have Diet Coke back then), the number of calories was a fraction of a calories in an adult-sized value meal at McDonald's (or any fast food restaurant) today.
Another big culpret is our busy, non-stop lifestyles providing much less time for meal planing and preparing meals at home where you have better control over content and portion size.

So what can we do about this epidemic? Research shows that parents and family dynamics play a big part in the establishment of a child's eating habits—good or bad. Exposing kids to a variety of fresh foods and eating them with your kids will help. Kids watch what you do. If they see you eating healthy foods, they're more apt to eat healthy foods. Even better if they can help you prepare the healthier foods. If they see you exercising, they're more likely to be more physically active. It's recommended that adults be physically active at least 60 minutes most days. That's hard to do, but try. Break it up if you have to. Park at the far end of the parking lot at work. If it's close by, walk to the grocery store. Take the stairs not the elevator. 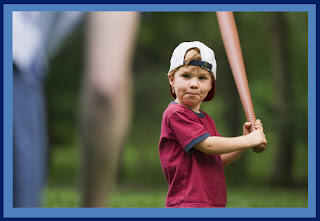 If you do these simple things, your kids will take notice and it will become ingrained into their daily habits. Take a walk with your kids each afternoon before dinner (even if it's only 15 or 20 minutes). This also provides you time to talk to your kids about their day. Plan one day a week where the entire family participates in a physical activity like flag football, tag, badminton, volleyball, or kickball. Let the kids pick the activity/sport so they feel like they have a say.

Go for a family run. Pick a local 5K as a family goal. Not everyone has to run. Many 5Ks have a walk or a kids fun run as a part of the race festivities. In a recent post "How Running changed My Life: Noah's Story," Noah shares about his healthy transformation. He also talks about his upcoming marathon which is going to be a family affair. His wife is running the 10K and his young son is running the 1-mile kids run. Just a little more than 2 years ago, Noah would have never pictured his family running, much less running a full marathon, a 10K and a kids 1-miler. Noah's son has great role-models and has a great chance of never having to deal with childhood obesity.
So, give it a try. Make healthier choices for meals and get your family active! Below are some websites to help you get started.
BAM! Body and Mind—wealth of ideas on nutrition and fitness for kids
MealsMatter—How to plan healthy meals
Family.go.com—20 Lighter Family Favorites
EatingWell.com—recipes & menus, nutrition & health
MayoClinic.com—20 Lighter Family Favorites
EatingWell.com—Fitness for kids: Getting your children off the couch
Kidnetic.com—Getting Kids Active–10 Minutes at a Time!
About.com—All Kinds of Active Play Ideas
KeepKidsHealthy.com—Fitness and Exercise Guide
Posted by RunnerDude at Thursday, September 10, 2009

I see the effects of this problem everyday at my middle school where I work. Food has a different meaning to kids these days than even 15 years ago when I was in middle school. Many of your points are right on; my fear is that these types of posts and the information out there, doesn't get to the people who need it most. I think the biggest problem when it comes to obesity is lack of awareness.

We need more Noah's!!! He is an inspiration!

Hey onelittletrigirl! I agree with you wholeheartedly. Probably most of the blog's readers are just like Noah and are already doing great things with their families. And it's hard to tell another family (that may need some help in this area) what to do. But maybe just sharing our experiences with others will eventually have a trickle-down efffect. It is a dilemma. I think we need to sent Noah on the road to share is story.

How do you get the info out to those who need it? Hey readers! What are you're suggestions?

Great post. I was the second-fattest kid in my grade back in middle school (self-inflicted emotional eating). I would, however, be closer to the average weight if I was a kid today. It's amazing to me how large kids have gotten.

More than anything, it makes me sad. Ok, it also makes me a little pissed off at the parents, who hold ultimate responsibility when the kids are young.

I remember when I was little if we went to the burger place it was an ocassional treat...now that's dinner most nights for a lot of kids. And I think part of the culprit is price - as someone who over the last few years has been making more of an effort to buy healthy, organic foods and cook at home, I've realized it's FAR cheaper to eat fast food than it is to cook a healthy meal at home. I think convenience plays into it, but I also think that a lot of parents are feeding their kids at McDonald's every night because they can afford McDonalds but can't afford to buy enough healthy food at the grocery store to feed the family. Even within the grocery store, the prepackaged, unhealthy items are far cheaper than fresh fruits and veggies and meat. I was just recently at Disneyland, and most of the time at their food places it would have been much cheaper for me to buy a burger and fries or pizza or chicken strips than it would have been for me to get a fresh salad. Until we start making healthy food choices more accessible to the general public, I think we're going to continue to have this problem with obesity.

That is very sad. I see how I could have easily been one of those chubby kids. Single mom, eating on the go, latch key snacks, etc.

Fortunately for me, the internet and video games weren't as big back then and I enjoyed outdoor activities and exercise. It's been hard to eat healthy as an adult though.

As far as promoting Noah, get a facebook fan page. Send that around and keep linking to his story. Have a contest and have your readers link to his story as an entry as well. Also, write a press release about him and send it out to local and national papers. Write to Oprah. (Can you tell I am into PR?)

Hey Jesse! I think we must have been twins! I too was the second heaviest kid in middle school but when I compare my weight then to the average weight of a kid that age and height today, I'm average. In large part it probably is due to family influence, but I really think the busy, hectic lifestlyes many of us lead coupled with less and less importance put on physical exercise in school plays a big part too.

Hi IzzyBubbles! I think you make a very good point...it really is a complex problem. In many cases, I don't think that it's families not caring about what they feed their kids. In some cases it's lack of nutrition education. In others it's a money issue like you pointed out, and in still others it's a time issue. It is often cheaper to feed a family at a fast food place than buying healthy foods. Eating healthy can be done on a budget, but it takes some planning and time for thorough shopping. I think sometimes people think Healthy has to be organic or "specialty foods" when it can be little changes in things like how you prepare the food...grilling or baking instead of frying, not adding as much butter, using unsaturated oils instead of saturated. It means looking for sales, using coupons....which means a lot of time and effort. So whether it's a money issue or a time issue, it ends up sending a lot of families through the dry-thru, unfortunately. My childhood was a lot like yours. I think the only time we ate fast food was on trips. A splurge for our family was when my dad would pick up a bucket of fried chicken from the grocery deli and that was exciting!

Hey B.o.B! Great ideas! I need to hire you on to the RunnerDude staff (if there was such a thing) :-)

Those figures a really bad. It is an excellent idea for adults to be active as well!