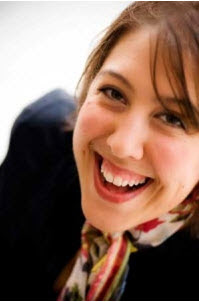 The other day I met a very inspiring young lady via Twitter. Her name is Aurora and she's a wedding photographer who lives in Dallas, Texas with her plus-size cat, Chunk. Aurora has overcome many personal hardships in her life and currently she's working passionately to make a vision of hers come alive. This vision is for a long-distance run for awareness that would help bring those who wrestle with emotional disorders (depression, food addiction, control, etc.) out of their personal denial. It would be the sort of project that highlights the real journeys of real individuals…and the chance for resurrection.
This is not just any long-distance run. This run will consist of a nearly 300-mile trek down I-45 from Dallas to the Texas coast. The run will begin on October 17th and end on November 14th 2009. She and the many other runners who participate will run approximately 10 miles a day for 29 days. Aurora calls it "a month on a mission." This run-for-a cause is different from the many other charity runs that abound these days. For this run, everyone is invited. There are no sign-ups. Aurora explains that instead, a participant can acquire a shirt on which they intentionally label their personal struggle, casting it in the light. That’s the entrance fee: the freedom found in self-disclosure. 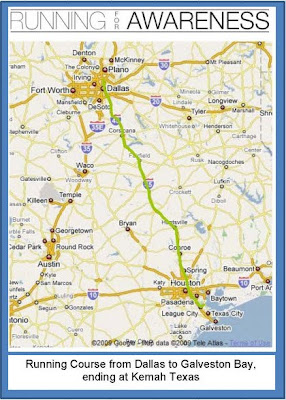 Aurora is hard at work preparing for the run. Craig Keaton, a holistic health coach and movement specialist based in Dallas, and Mike Hummel, running coach and world-class runner preparing for the 2012 London Olympic Games are helping Aurora train in such a way to avoid injury and optimize her performance.

Running Out, Aurora's personal telling of her own life struggles will be released in conjunction with the race. The book not only looks at her fight to overcome personal hardships, but also offers hope to those who struggle with emotional disorders and unhealthy addictions.
If you or someone you know struggles with emotional disorders and/or unhealthy addictions, check out Aurora's website to learn more about this amazing young lady and her upcoming event.
Posted by RunnerDude at Friday, June 05, 2009

She does sound interesting. While we live in Wisconsin, I'm going to check out her event. Thanks!

Hey Sara! Welcome to the blog! Sounds like a determined young lady to make that long trek. Definitely for a great cause. Have a great weekend!

great blog as always, great mix of useful stuff and in this case inspiration. What a great idea. It seems that "low or no" sign up events with a purpose seem to be the way forward. I look forward to following her progress. Thanks for sharing.

Hey Paul and Beth! Me too, I hope she gets a good turn out and some good media coverage of the event too.

Hi Hanh! Welcome to the blog! Thanks for the feedback. I wish I could participate in the event, but I'll definitely be checking on you guys' progress!!