Is Asphalt Really Better Than Concrete?

Both asphalt and concrete are pretty dang hard, but asphalt is a little better to run on than concrete. Some say Asphalt is 10 times softer than concrete. Jim Fortner stated in an article he wrote for The Final Sprint that you can feel the difference between the two surfaces by hitting each with a hammer. Most likely you'll leave a dent in the asphalt while more than likely nothing will happen to the concrete. Basically concrete is crushed rock and because of this has no give and as a result is very jarring to the body when you run on it.
So what are the different types of running surfaces and which are better to run on? Actually there are quite a few. Some are better to run on than others, but unless you're a multi-millionaire and have your own state-of-the-art track, you're probably like me and forced to run on one or more of the following types of surfaces. 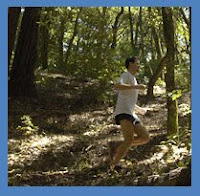 Trail
Dirt or small gravel trails are great for running and are much easier on the body. Trails, however, often contain obstacles—fallen branches, unlevel surfaces, tree roots—that can cause trips or falls, so run cautiously. The first time I ran on a trail, I fell flat on my face in the first mile. Every runner gets initiated on the trail by falling at some point, but, as long as you're tuned-in and watching where you're going, it can be a great way to add variety to your weekly runs.

Grass
This is a great surface to run on because it's softer and much easier on your joints. Be sure to run in short grass not long. You may want to scope out the area before running, making sure there are no hidden holes or divots. 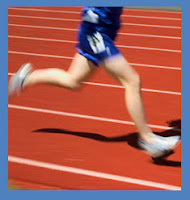 Track
Tracks can be constructed using a variety of surfaces from dirt, to asphalt, to state-of-the-art Tartan Tracks made of all-weather synthetic polyurethane. Tracks are good because they are flat and some such as a Tartan Track will provide some cushion. Tracks are also great if you need to gauge your pace for specific distances such as during an interval workout.

Treadmill
Treadmills can be very boring, but that have an upside—they're cushioned, flat, safe (as long as you're paying attention and not checking out the hot guy/gal beside you), and great when weather or heat doesn't permit outside running. The down side is that they don't give you a true sense of outdoor running. You can regulate the percent of incline to better mimic outside running, but treadmill running tends not to strengthen the muscles that help with balance and coordination. So, if you do a lot of treadmill running, be cautious when you head outdoors. If you're a treadmill runner, add some strength training to help with balance and coordination.

Asphalt
Often streets and greenways are paved using asphalt. It's definitely a hard surface, but not as hard as concrete. Many experts suggest running no more than 2/3 of your mileage on asphalt.

Concrete
Typically sidewalks are made of concrete. This is probably the hardest surface and most unforgiving surface you can run on. If you have a choice, avoid running on concrete. Many reoccurring injuries can be traced back to running consistently on concrete.

Slanted Surfaces
Slants can occur no matter what the surface is made of. Running on a slanted surface is fine for short distances, but consistently running over long stretches of slanted surface can cause a variety of biomechanical problems and injuries such as iliotibial band syndrome (ITBS). Runners and cyclists often fall victim to ITBS which is characterized by sharp or burning pain on the outside of the knee, thigh, or butt.
So, when you can, find some routes that provide a little cushion and give your body a break from the pounding of the pavement.
Posted by RunnerDude at Tuesday, June 30, 2009

Lot's of chip and seal out here, the tar grabs your shoe on hot days!

I have had the opportunity recently to try out the Vibram Five Fingers on a variety of surfaces. I can tell you that you do not need a hammer to understand how bad concrete can be for you. You can feel it.

Hey Mark! Man, that's some hot road!I heard where some runners will run on the white line because it's cooler on the feet. I'm thinking treadmill if it's that hot! LOL!

Hey Jamoosh! I bet man! I've read about the Vibram Five Fingers and event posted on them, but haven't tried the out yet. What did you think? I'm not sure I could wear them. I have a problem with my metatarsals on one foot and have to wear a pad for support.

My normal route consists of 2 miles of concrete and then asphalt. I guess I need to look into a different route in order to prevent any problems.

Thanks for the great information!

Hey RunningThroughLife! 2-miles probably isn't too bad, but anywhere you can cut down on the concrete, would be good. On the other hand you also have to weigh your options. If the grassy areas to run on are full of holes, tree roots, etc., the sidewalk might be your better option. Next time you're on your regular run, take a look at the area along the sidewalk. Is it dirt or grassy? Could you safely run along these areas where they occur along the sidewalk? Those areas can add up and save your body some jarring. Also, makig sure you replace your shoes frequently and even replacing the insoles with ones that have more shock absorption can help as well.

Whenever road running I try to run on asphalt as much as possible instead of the concrete, usually running toward impeding traffic, but its worth it.

Trail running is great to relieve some pressure on your body too. But in addition to the risk (which is part of the fun on trail running) of falling, your legs can take a pounding running down very steep declines. When trail running at a moderate pace or higher, down one of these steep declines, you start to gallop as a runner which puts more pounding pressure on your legs instead of a fluid motion like when running on a flat surface. Overall, trail running is way better for you than asphalt or concrete but just know that if you are nursing an injury that you should take it slow down the hill.

Here's the largest trail running listing on the Internet: http://www.seriousrunning.com/trail-running.php

Find a trail near you and take some pressure off your legs!

You fell flat on your face? Oh man, that would have been fun to watch. I can say that, since I've done it and the person watching me had a great laugh. ;)
I'm always telling people to get off the sidewalk! Run in the street, facing oncoming traffic. And if you can, get on some dirt. ;)

Hey SeriousRunnin! I haven't gotten into trail running much yet but would like to. With my FIRST marthon training there's not much time to fit it in. A friend of mine emailed and asked the FIRST guys if we could do our weekly tempo runs on the trails. He said it wouldn't be good because we wouldn't be ablt to keep the consistent intese pace the tempo run required. We can't use it on our cross training days either because those days are for non-running exercise. Too pooped to use one of my rest days....Oh well maybe after October! LOL! The trails ain't going no where.

Hey Jo Lynn! Your compassion moves me greatly. :-) It was quite funny. Nothing broke my fall...just bonk, right on the ole honker. At least it was on soft dirt/grass instead of concrete. LOL!!

You have the greatest posts on your blog - so informative. I can tell you research things before you print them. Good job.