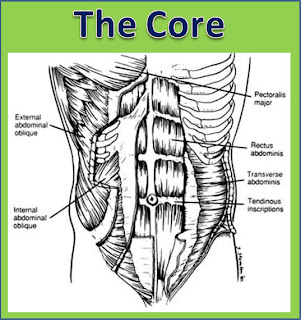 After my Saturday group long run, I was talking with my good writing, blogging, and running buddy, Dena about our upcoming marathon training. Dena's running Chicago and I'll be running Marine Corps. They're only a few weeks apart, so we're trying to coordinate our training efforts as well as recruit others in our adventure using the FIRST program. Somehow we got on the topic of core strength and I asked her if she ever worked out with a medicine ball for core strength. It dawned on me during this conversation that my medicine-ball core workout would be a great thing to share with the RunnerDude's Blog readers. A strong core is essential to efficient running. The power for your legs originates in the core. A strong core also helps you in those later miles of a distance run. It takes a lot to keep your torso upright and aligned with the rest of your body. The following workout routine consisting of eight simple exercises using a medicine ball will give you that strong core. 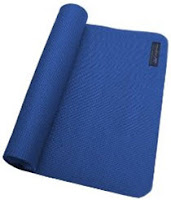 The great thing about this workout is you don't need much stuff—just a medicine ball and a mat. I purchased both at Target. I paid about $26 for a Zenzation Yoga Mat (there were some cheaper and some more expensive mats to choose from). I paid about $30 for an 8lb Reebok Medicine Ball (4, 6, 12, and 15lb balls were also available from other makers). The Reebok medicine ball comes with a removable handle. With the handle, the ball can be used like a kettlebell weight. If you're new to using a medicine ball you may want to start with a lighter weight. If you're a pro and want to up the ante, just use a heavier ball, but the 8lb ball gives you a pretty good workout. 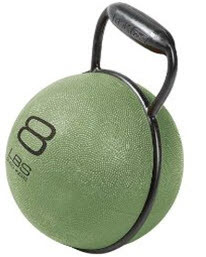 The routine below is one I do three times a week. Once you learn the exercises, it doesn't take long at all to whip them out. The routine consists of 20 repetitions of each exercise in a circuit. That means a set of 20 for one exercise then move directly into the next set of 20 for the next exercise. These exercises do not have to be done in the order shown below. Actually, it's good to mix them up once in a while to keep the body guessing. 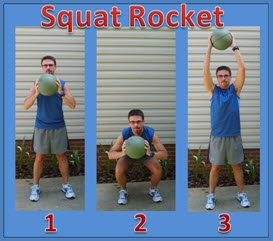 Over/Under—Stand with your fee a little 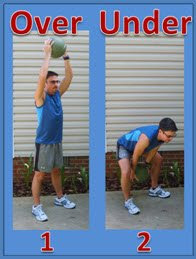 wider than shoulder width. Hold the ball with both hands over your head with your arms fully extended. Bend forward moving the ball between your legs. Straighten your back and return to the starting position. This is one rep. (20 reps) 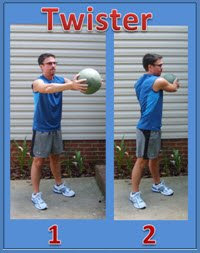 Twister—Stand holding the ball in front of you with your arms completely extended. Keeping your arms straight, twist as far to the left as you can. Return to the starting position and then twist as far as you can to the right. This is one rep. (20 reps) 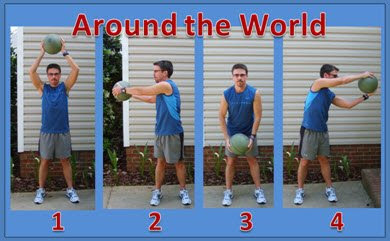 Situp—Lay on your back on a mat. Hold the ball against your chest. Bend your knees at about a 90° angle. Now do a traditional situp and return to the starting position. (Note: at the start position, your head should be resting on the mat.) This is one rep. (20 reps)

Knee-Lift Crunch—Lie on your back with your legs stretched flat and your arms extended straight behind your head holding the ball with both hands. At the same time, raise your upper body and your right knee (keeping your arms straight while holding the ball). Return to the starting position and repeat with the left knee. This is one rep. (20 reps)

Sit-n-Twist—Sit on the floor with your legs outstretched in front of our. Hold the ball with both hands in front of you above your lap. Twist as far as you can to your left. Return to center and then twist as far to the right as you can. This is one rep. (20 reps.)

Put-a-Hurtin-on-Ya Twists—Sit on the floor. Hold the ball with both hands in front of you. Lean back at about a 45° angle and lift your feet off the ground. Without letting your feet drop, twist to the right as far as you can. Return to center and then twist as far to the left as you can. This is on rep. (20 reps)

I'd like to thank my 17-year-old son, Duncan for humoring me and being my photographer. I think he did a pretty good job. Thanks Dunc!
Posted by RunnerDude at Saturday, June 06, 2009

Perfect timing - I'd been looking for a good medicine ball workout. I'll add this to my workouts. Thanks!

Hey Turi! Welcome to the blog! Glad this will help. It's a really simple but good workout. Have a great Sunday!

great post! i use a regular ole dumbbell weight in the same fashion if I don't have access to a medicine ball! the grip is a little awkward, but it'll do the trick! the "put a hurtin on ya twist" is probably my most favorite core exercise ever!

Hey Acey! Yep, I use to use a dumbell too. Still do sometimes if I want a little more weight. The ball has more of a natural hold to it though, better on the writst. But you could use whatever....maybe a big can of pork-n-beans! LOL!

I love that medicine ball with the handle... I may need to purchase that. The core is my nemesis. I'd rather run a mile than do a sit-up. =)

One of these days, I'm going to have to get one of these "cores" that I hear so much about.

Hey Zero to Boston! Welcome to the blog! I'm still looking for mine too man! LOL! Have a great weekend!

That looks like an awesome workout! I have an eight pound medicine ball. Hey, it's sitting there looking at me right now! I like the idea of the one with the handle and using it as a kettlebell. But, the up and under exercise looks like a good substitute. Thanks for sharing this information with us.

Great pictures! Funny names for the exercises. Did you come up with those yourself? I especially like "Squat Rocket". I'll have to share that one with my boys. It will take on a whole new meaning, I'm sure. :D

I've seen people use the medicine ball at the gym. I didn't realize there were so many different routines one could use. I may have to give it a try.

Hey Running Through Life! Yep, those workout names are RunnerDude Originals. LOL!! Never thought about that, but my kids would have a field day with "Squat Rocket Too! LOL! Now I'll probably laugh every time I do one!
Yep, there are lots of excercises you can do using the medicine ball, these are just a few. Really does give the ole midsection a good workout. Goal realy isn't a six pack, but just to build strength.

thanks for the tips! i always tell myself i need to get a little religious about the side-items of running like core work, strength training and stretching, but i am not too consistent. i have been working myself back into a little core work at least 3x/week though, and hopefully will keep it up! will have to throw in these exercises for some variety.

Thanks. I'm in training for the crosscountry team and the workout my coach gave me had me struggling more than usual. This will help alot.

Hey Kaytie! You'll be surprised how much a stronger core makes in your running! Keep me posted throughout your CX season!

Thank you thank you thank you for this link. I will definitely have to go get a mat and one of those Balls. These exercises look fun. Im just wondering how I will do with a gut still lol. You Rock! Well, then again, you are a NC Dude. lol.

These word verification words, I wonder if I start using them on a regular basis.

Word of the day - bousive lol

Hey Kenley! Me know how you like the workout! It's a part of my regular routine.

I will, thank you!

Hey runnerdude. Hope all is well your way. I just posted an article on my blog and set up a link for you. Its for the core workouts. BTW, thanks so much for the info. Those exercises are helping me to kick ass-phalt! lol. and the hills are a lot easy too. My tum tum is shrinking and my wife loves it and so do I and I can go on and on but......Thanks anyways. You carry a wealth of info that I wish to carry too. You are wonderful with your blogging. Keep it up!