From My House to The White House 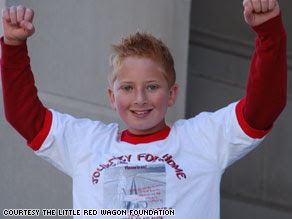 Today's post isn't exactly about running or fitness, but it is about determination, perseverance, and commitment—all traits of a runner. Zach Bonner, a red-headed 11-year-old from Tampa Florida walked through my hometown (Greensboro, NC) yesterday in the pouring down rain. Zach's on a mission. He's walking from his home in Tampa to the home of the President—The White House—in Washington, D.C. He's making this 1, 225-mile trek to raise awareness of and money for the thousands of homeless children in our country.

My local newspaper (The News & Record) quoted Zach saying, "Some kids like to play baseball, some kids like to play soccer. This is what I like to do." Laurie Bonner (Zach's mom) has walked alongside her son for most of the journey, which has been spread over a couple years. Zach first began his journey to the White House in 2007 by walking from his home in Tampa to Tallahassee by walking about 15 miles a day. Then in the fall of 2008, he walked from Tallahassee to Atlanta. He is now mid-way through the last 668 miles from Atlanta to D.C. Zach hopes to reach The White House in early July. Zach, who has received many service awards such as the Presidential Service Award, is looking forward to meeting President Obama. 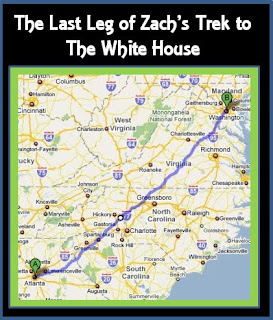 This trek to The White House isn't Zach's first experience with community service. Back in 2004, after Hurricane Charlie hit Florida, Zach got involved in the recovery effort in his town. In 2005, Little Red Wagon Foundation (Zach's non-profit organization) was created to help underprivileged children. Zach makes backpacks and fills them with food and supplies and gives them to homeless and street kids. He's distributed over 1,200 of these packs across the country. To learn more about all the great things Zach and The Little Red Wagon has done for kids [click here].
Zach and his amazing journey have gotten the attention of some notable personalities such as singer Elton John who has pledged $25,000 for the cause. Zach wants to use that money as well other funds he's raised on his journey to help remodel an old apartment complex he hopes will one day house homeless youth.
Check out the video clip below to learn more about Zach and his cause.
Posted by RunnerDude at Wednesday, June 17, 2009

Great story. I teach 5th grade Sunday School and Zach's the same age as my kids. Guess what they'll hear aobut this Sunday. Love to see articles like this when I start feeling as if I'm having a tough time accomplishing something. Thanks for the uplift.

Hey Anonymous! I know what you mean. If an 11-year-old can accomplish all of this, I certainly can do the small things I need to be doing. Thanks for the feedback and reading the blog!

Great post...hearing about an 11 year old doing something like that certainly makes all of the "problems" in my life seem like minor inconveniences. :)

Hey IzzyBubbles! I agree completely. His mom seems like a great lady too.

WOW! Go Zach! I'm glad to hear such an inspiring story from such a young guy, he can teach us all a lesson!

Hey Heather! Maybe Zach should stay in DC a while and set some of those "leaders" straight! LOl!

Your words are uplifting indeed. Some people definitely will find them inspiring! Great post. Keep them coming! ; ) Thank you.

Thanks Runnerinsight! You're an inspiration as well!

ok, wow! what an amazing kid. My eyes started to well up during that video. As a parent, I can only imagine how proud his parents are to have such a remarkable child. Thanks for sharing his story with us! This renews my hope in mankind.