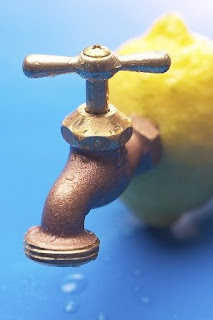 I'm a firm believer that things happen for a reason and the often times things that may appear on the surface to be unrelated are often connected in some way. Kind of like meeting a stranger in the airport only to discover you both know the same person. I'm not sure who first coined the expression "When life hands you lemons, make lemonade," but he/she was a wise soul. I was given a big ole lemon back in February when I was laid off from my job of 13 years as a writer/editor at an educational publishing company. To make matters worse, even though they let me go due to the economy (along with 14 others), they still held me to a non-compete agreement I had signed many years ago. So, basically I'm not able to work in my field for 18 months. I've been told I would probably win if I took them to court over the issue, but it took most of my funds just to find that out.

Back in 1997 something made me decide to run a marathon. My first marathon—New York City. A few years later in 2001, I was diagnosed with Colitis. It was my running that helped me to recover from a colitis-related surgery in 2002. If I had not had my running and had not set a goal to run the Nashville Marathon 8 months after my surgery, I doubt I would have recovered as quickly as I did. That marathon goal also led me to my running group which has been a wonderful source of support and inspiration. I also believe that my fitness and running have been a big part of my remission from my colitis for most of the past 5 years. A running injury about 3 years ago led me to the gym for strength training while not being able to run for 3 months. This led me into an entirely new world of overall fitness and strength training.
My increased knowledge of running and fitness as well as my love of writing, led me to create this blog—RunnerDude's Blog. You guys have helped push the blog up to #11 on the Top21RunningSites site. THANKS! The blog gets hundreds of readers every week from all over the country and the world—Ireland, Finland, Scotland, Italy, Brazil, Australia, India, Greece, etc. Writing for the blog has really opened my eyes to something—I love researching, reading about, and sharing my running and fitness knowledge with others. 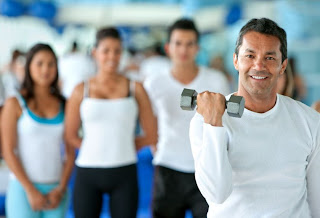 Here comes the lemonade part....losing my job was a huge blow, both to my confidence and to my sense of self, but it has opened up an entirely new opportunity. The past 10 years has been full of one fitness/running related event leading into another with me loving and growing from each. It finally dawned on me that maybe I need to take my life into a new direction—one in which I could combine my love of writing, teaching, running and fitness. In July I'm getting my RRCA running coach certification and then I'm entering a 6-month diploma program with NPTI (National Personal Training Institute) to become a personal trainer and nutrition consultant. My dream is to combine coaching runners, personal training, life coaching, and nutrition consulting into a business to help others on their way to becoming fitter individuals.

I'm both scared to death and excited about what lies ahead. I'd love to hear from anyone who's made similar transitions.
Posted by RunnerDude at Friday, May 01, 2009

I really like this post and your attitude. I completely agree with this idea of making lemonade out of lemons. I'm not sure about my religious beliefs, and I'm not sure if "everything happens for a reason" is true, but sometimes things don't necessarily need to be true to be empowering and worth believing. I have found this belief to be so helpful to me. Running injuries (and a missed marathon) led me to swimming and a new interest in triathlons. And there are so many other examples of seemingly unfortunate things happening that open the door to new things. Thanks for the great post!

I went a similar path following a lay-off many years ago. It lasted 9 months (no longer due to lack of a solid plan - my bad!) but it was a very rewarding path. I helped many clients not only lose weight but increase their self-esteem and confidence. Best of luck with your new endeavor!

What a great attitude you have! I know you will succeed in your endeavor; you have great potential. Way to turn your life around!

Hey NoMeatAthlete, jpickett1968, and Gina! Thanks so much for the encouragement! Means a great deal!

What an inspiring post. Life always throws us in directions we don't expect only to find out that's where we find our true selves.

Hey Bellaluna! Thanks for the encouragement. I like that "Run towards yourself." Think that will be my new mantra!

I have every confidence you will be great at this. With every post you create, you seem to help and teach others of various running and fitness related topics. I for one have enjoyed you sharing your knowledge and providing me with great tips and advice that I use in my training and everyday life.

Best of Luck to you!!

Since starting to follow you on Twitter your blog has become one of the staples of my running reading repertoire. (try saying that 5 times fast!)

I wish you all the best - I have every confidence that your new path will be a fruitful and rewarding one. Thanks for the great post and for sharing with us!

love it! Sounds like you have moved along the right path! And with the new Runner Dudes mens running group, you will continue to thrive!

one door closes - another one opens - To your success!

Hey Running Through Life!Thanks so much for the feedback and encouragement. I've always heard you should do what you love and I'm finding that to be very true.

Hey JLF!Thanks so much for your support and for reading my blog!

Hey Jules! Thanks so much for your support and your help recently!

I love your Blog... Mexico is one of the places where you are read. I'm one of the people that is enjoying the Lemonade that you are preparing. I'm heading to my first marathon, and now, running is one of my way of transforming my life... :)

Hey Otto! That's awesome man!! Best of luck on your first marathon. You'll do great! Thanks for the feedback and support on the blog. Greatly appreciate it.