Rules for the Road 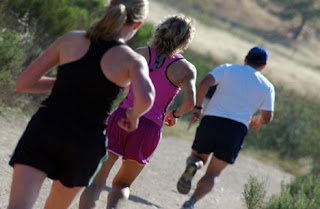 Just like every other sport, running has some basic rules too. Running rules, however, have more to do with safety and etiquette (how to play nice). Listed below are 20 "rules" to remember when you hit the road. Whether a novice or an elite, be safe, review the rules, and remember them next time you hit the road (or trail).

• Run against traffic, if running on the road.
• Don't run down the middle of the sidewalk, trail or greenway. Instead, run on the right and pass on the left.
• Be prepared for oncoming traffic along blind curves. Remember that blind curves can also occur on sidewalks, trails, and greenways.
• Always alert a walker or runner that you're passing by saying in a loud firm voice, "Passing on your left." or "On your left." Never assume they can hear you coming.
• Never wait until the last second to warn a fellow runner or walker that you're passing. This can cause quite a scare, especially if they're listening to music totally unaware of your presence.
• Many parks and greenways have designated lanes for pedestrians and bikes. Make sure you're in the appropriate lane.
• Always look both ways twice before crossing an intersection.
• Never try to beat a car, cyclist, train, etc. at an intersection, even if you have the right-of-way.
• Don't be a road hog. Never run more than two abreast.
• Avoid making sudden U-turns while running. Instead pull off to the right, stop, and look for oncoming traffic (walker, runner, cyclist, car, etc.). If clear, complete your turn-around.
• Never stop suddenly during a run. A fellow runner, walker, cyclist, or rollerblader could be right behind you.
• Don't litter. It's very easy and much more convenient to toss that used gel pack on the ground, but don't. Instead store it in a fanny pack, or pocket and dispose of it properly after your run.
• Don't jingle-jangle. Be sure to clear your pockets of loose change and don't run with a key ring stuck in your waist band. Not only will this annoy your running buddies, you'll find it bothersome yourself after a few miles.
• If you run with a large multi-pace group, be sure someone takes a count of the runners before heading out. Also, be sure to have a designated start and finish area. After the run, check to see if they're any missing runners. If it's a long run, having a midpoint "check-in" is a good idea. Never want to have a fellow runner who's in need stranded on the trail.
• If you run with a group, come prepared with water, sports drink, gel, etc. Runners are generous people, but no one likes a repeating moocher.
• Provide running advice only if requested. Slow does not mean weak and faster doesn't mean stronger. Respect your running peers.
• Make sure if you run with a dog that it's leashed and under control. Not everyone enjoys having a dog abruptly greet them, jump on them, or be under foot.
• Look before you spit and be aware of the wind's direction. Nothing worse than having a snot rocket land on your shoe!
• If someone is more of a social runner—respect that. If someone is more of a competitive runner—respect that. There's room for both in the running community.
• Encourage your fellow running buddies. You'd be surprised how much a simple "Great job" "Good Run" or "What was in your Wheaties this morning?" can do to bolster a person's confidence.
Posted by RunnerDude at Saturday, May 16, 2009

Email ThisBlogThis!Share to TwitterShare to FacebookShare to Pinterest
Labels: Running tips and etiquette

Thanks for posting these rules.

I rarely have trouble with other runners-- it's the walkers that drive me nutz.

Most have IPODS and can't hear when I alert them to me passing-- and they almost always sway back and forth all over the sidewalk-- hogging the whole thing. I always have to run off the sidewalk, over dirt holes or roots-- which could lead to injury.

Hey Patrick! I'm glad to know it's not just me. I was starting to get a complex. LOL!! Seems that I'm always the one to have to move over when I'm running. And you're right, walkers seem to be the worst about hoggin the pathway. Sometimes they're 4 abreast and I'm the one that ends up having to run off into the ditch! Okay, I've vented. LOL!

Right on with this post. Hopefully some of the trail hogs will read this as well.

Hey Running Through Life! It's the walkers that seem to "hog" the greenway round these parts. Not the serious walkers but the social groups strolling through the park 4 abreast that get me. LOL!