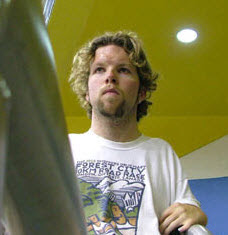 Twitter is such an awesome social tool. I've met so many cool people through following and being followed by fellow Twitterers. One such person is Jeff May, from Ontario, Canada. I have met people who were passionate about running, but this guy has passion times two! Jeff's running style is a bit unconventional. The way he competes isn't an internationally accepted way to race right now. He's been allowed to compete in Canada at most major events but not at any international level games. Curiosity piqued?

Jeff competes in a specially designed wheelchair in which he uses his feet to propel himself forward. Because of the way Jeff propels himself, he's not eligible for the Paralympics. But this doesn't keep Jeff down. He continues to go out and compete when I doubt a lot of others in his situation would. Jeff's often asked why he continues to put himself through the heartache of being overlooked for national teams even though he's won a Canadian Championship. 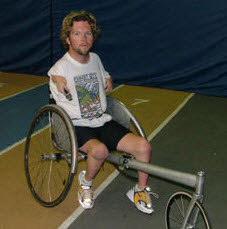 Jeff's response:
I just love the sport too much and I get more out of trying to see how fast my body can go, then judging myself against others. One of my running idols Steve Prefontaine once said, "To give anything less than your best, is to sacrifice the gift." I truly believe in that concept and that's how I approach every workout. For me going to the track or going for a long run is a gift and to not put forth my best effort each practice would only be cheating myself.

Since 2006, Jeff has been the cofounder, president, and CEO of the Bo 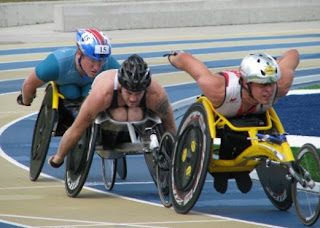 iling Point Wheelchair Track Classic, the premiere athletics competition in Canada for athletes with a physical disability. The event combines a high performance track meet with a youth development camp and coaching clinic. He chairs the organizing committee and as the meet director he's responsible for the smooth execution of the meet.
Boiling Point 2009 will take place July 10-11. Athletes and coaches from 11 different nations have given their praise for Jeff's organization and hospitality. Combined with the four World Records that have been broken at Boiling Point, it’s easy to understand how this event has cemented itself as a Global leader within the international calendar of Para-athletics competitions. [Click here] to learn more about the Boiling Point Wheelchair Track Classic.
Jeff's also a motivational speaker and in 2008 he was the co-host on the 2-hour cutting edge sports talk show Drive This which airs across North America on Sirius satellite radio channel 98, Hardcore Sports Radio. [Click here] to check out Jeff's cool Website. To see Jeff in action, check out the clips below.

Amazing. Thanks so much for sharing!

Hey The Happy Runner! Sure thing! A clip of Jeff in the Chicago Marathon was added. It may have bee included after you read the post. Check it out if it wasn't there earlier! Thanks for reading!

I never fail to be amazed at the power of the human spirit and the compelling nature to compete in whatever way we can. Jeff's story is amazing and gives us all a reason to respect the gifts we've been given and use them appropriately.
GREAT STORY!

What incredible spirit! We can all learn a lesson from Jeff!

These guys are as tough as nails. I love to watch them.

This is very inspiring! Thanks so much-- I needed that today.

Love the pictures and video-- you have such a great blog!

Hey Racesinplaces and Tony! Man, spirit and determination 10-fold! Hard to complain when you see the obstacles these athletes have overcome.

Hey Patrick! Thanks for the feed back! Greatly appreciated!! Been enjoying reading your blog as well.