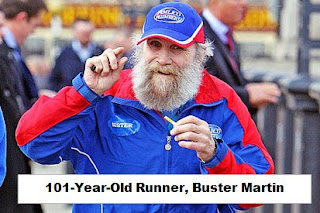 More and more in the news you read about how people are living longer. Not only are people living longer, but the quality of life and health of the elderly is better than 10, 20, 30 years ago. A lot can be contributed to the advances in medical science, but I also think there's been a big shift in the mindset and expectations of people as they get older. Or maybe the two (medical advances and mindset changes) are working together to extend our lives. Research shows that the more active you are the healthier you'll be both physically and mentally. I'm speaking in generalities, but for the most part I really think there's a lot of truth in the old saying, "If you don't use it, you'll lose it."

Many moons ago when I was teaching 5th grade, my students dressed in black and gave me a cane for my 30th birthday. I got a big kick out of it. To them (10 and 11-year-olds), I suppose I was old. Funny though, I do know some really "old" 30-year-olds and I know some really "young" 70-year-olds. In part, age is a mindset. In 1997, I ran my first marathon—NYC. I was 32. The oldest person who ran the marathon that year, was 95-years-old! He was over 60 years older than me! I don't remember his exact time, but it was around 5 to 5.5 hrs. I was amazed and inspired!

Simple things like walking can really benefit individuals as they age. A recent study consisted of a group of 60-year-olds and older that were enrolled in a 4-month walking program and a control group of the same ages that was not involved in the walking program. The participants in the walking-program showed marked improvements.
Through Twitter, I've befriended a really cool guy, Jeff Pickett, who has a great blog appropriately titled, Life Isn't Over at 40 or Any Age. Jeff blogs on a variety of running-related topics, but the coolest part of his blog is his video diary of his training for the upcoming Twin Cities Marathon this fall. Jeff share's his ideas and theories about his training as well as the hardships and successes he incurs while training. The honest sharing of his marathon journey has me hooked and I'm rooting him on in his quest. When you have a chance, check out his blog as well as the sample clip below.

Email ThisBlogThis!Share to TwitterShare to FacebookShare to Pinterest
Labels: after 40, being active, marathon training

Hey Missy! I'm right with you! Isn't there another saying, "Things get better with age." LOL!

I'm honored by the mention in your much better blog, but thanks just the same for the kind words. I'll try not to disappoint as I continue my ramblings and I'm anxious it will have a happy ending. It's always great to meet other runners, read their input and advice and become stronger at the same time. Keep up the good work and the insightful posts!

Hey Jeff! Don't sell yourself short man, you've got a great blog! And, your race definitely will have a great outcome. Your training is right on track and your doing great.

I totally agree with you, sometimes the age excuse just doesn't work! :)

Hey Chic Runner! Just had a Twitter friend tell me that a 70-year-old in his running group still does sub 8-minute miles in 5k and 10Ks! Awesome!

I don't have an excuse yet... but I'm hoping as I grow in age... I am able to perform better and faster than I am right now as an athlete in my mid 20s!

You know, I'm 24, and I am constantly amazed at people who are just slightly older than I am who cannot stop whining how old they are!!! Ridiculous, isn't it?

You are right, it's all a matter of mindset! At least, I refuse to even begin to think that in 2-3 years I'll be old. HA! I'm not planning on getting old at all :)

Hey Untpawgal02! I'm sure you're doing just great now, but you'll be surprised how you'll do even better as the years go by!

Good post. It's so inspiring to see people at that age running marathons. Well, I hope I get in better shape as I age! I need some marathons under my belt!

Oh and I loved the video. I'll be checking in on his blog from time to time as well.

Hey Jessica! Thanks!I have no doubt you'll get those marathons done! I'll let Jeff know you'll be checkin in on his progress. Happy Running!

Last year I was eating after a marathon and a dude came and sat down at the table with his food, I figured he had just finished. Nope, he had finished about 30 minutes ahead of me. He had recently turned 70 and ran a 3:30 marathon and it was his 70th marathon!
I'm in better shape at age 46 than I was in my 30s and don't plan on getting old anytime soon!

Naturally, our body also ages as we age, but true as it is, a runner is getting better and stronger than ever as he/she ages! Thats the magic of running and us as runners! Kudos to us all!

Hey Lorenda! I know what you mean. As I age the competition is actually getting tougher! There are some fast runners in the 40-44 age group and even faster ones in the 45-50 group. Keeps me on my toes (literally!)

Hey Runnerinsight! Yep, that's the cool thing about running. Anyone can do it and do it at their own level. Then they can set their own goals to shoot for. It's one of the few sports/activities where you can have your own individual goals yet be with a group. Kind of cool, huh?

I think with age comes wisdom. I am turning th big 40 this summer and I feel that I am in the best shape of my life. I am amazed and wish I would have discovered this fountain of youth (running) years earlier.

Hey Running Through Life! You sound like me. But no looking back or regrets. Just keep moving forward and being as healthy and fit as you can be!

Great to hear about people doing their best running as they get older. I started running relatively late and still have some major goals to achieve, so it's very inspiring to hear this!