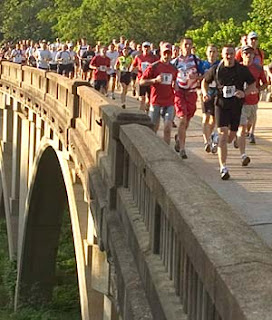 Whether it's a 5K, 10K, half-marathon, full-marathon, ultra, or something in between, racing can be stressful, not only on your body, but on your nerves too. Listed below are 25 tips to help ensure an enjoyable racing experience.

1. Register for the race. Don't be a Bandit. It may be daring and fun, but it's not fair to race organizers, volunteers, and especially the runners who've paid to participate. Remember too, that often a race is a fundraiser for a worthy cause or charity.
2. If possible, pick up your race packet the day before the race. If that's not possible, arrive at least an hour before the start time to get your packet.
3. If it's a race you've never run before or if it's in a town you've never been to or are unfamiliar with, be sure to use a site like MapQuest or Yahoo! Maps to get directions. Both sites provide estimated travel time, mileage, turn-by-turn directions, and maps, which you can print and take with you. 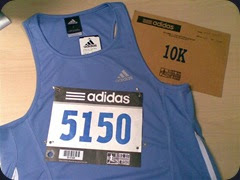 4. Layout your racing clothes and shoes the night before. If you've picked up your race packet, go ahead and pin on your racing bib.
5. Make sure you have the breakfast foods you normally eat before running on-hand. Race day is not the time to test out something different or to discover your cupboard is bare.
6. When it's time, be sure to line up according to your estimated pace for the race. Some races organize the runners by pace, but in 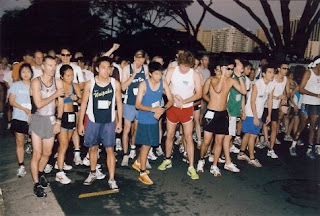 most small local races you're left on your own to do this. Elite runners (the ultra fast guys and gals) are in the front typically followed by groups of runners which decrease in pace times by typically a minute. For example, behind the elite runners of a 5K, the next group might be runners expecting to run a 6:00-7:00 minute mile. Behind this group would be the 7:00-8:00 minute milers, followed by the 8:00-9:00 minute milers, and so on. Neither delaying the fast runners nor being trampled is a good thing.
7. While in the sta 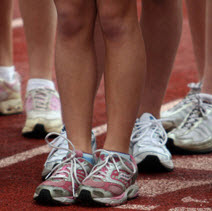 rting corral, look down. Make sure your shoes are tied.
8. Expect the first half-mile to mile in a race with lots of runners to be very crowded and tight. This will eventually ease up as runners spread out along the course.
9. While running be sure to express thanks to the many volunteers helping along the course. A simple "Thanks!" or a smile and a nod will do.
10. Never come to a dead stop in a race. This can cause a pile-up! If you need to tie your shoe, pull off to the side.
11. As you weave in and out and pass fellow runners (especially during the start of the race), be sure to say "Excuse me" "Coming through" or "On your left/right."
12. If you hear "Excuse me" "Coming through" or "On your left/right", be sure to move over. It's proper etiquette to allow the runner to pass when they've announced their intentions.
13. If you plan on discarding some layers of clothing along the race course, be sure to move over and drop the clothing along the curb. 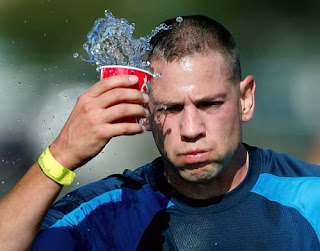 14. Pay attention to automobile traffic. The course may not be completely closed to traffic or a car could accidently wander into the course route.
15. Check the race website prior to race day for the location of the water stops. This is more important for longer races, but good info to have for any race.
16. Check to see if the race organizers have announced the brand of sports drink provided on the course, if only water will be provided, or if both will be provided. If the race is using a brand different from what you've used while training, better plan on carrying your own.
17. Often a water station will have more than one table. Heading for the second table will help you avoid the "clog" that often occurs at the first table, especially in the early miles of a race.
18. If you plan to stop at or walk through a wa 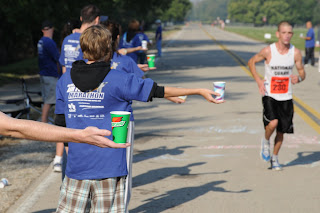 ter station, it's best to keep moving through the station, get your water, and then pull off to the side out of the way of your fellow runners. Once you're ready to run again, be sure to look before merging back into the flow of runners.
19. If it's a winter race, take extra precautions at water stops. Often they become skating rinks!
20. To avoid spilling the water or sports drink down your front, squeeze the top of the cup forming a V-shape. Use the tip of the V as a spout and drink from this end.
21. If provided, be sure to toss the cup in a waste can. If none are provided, carefully toss the cup to the side out of the traffic area.
22. Encourage your fellow racers. This works well in out-and-back c 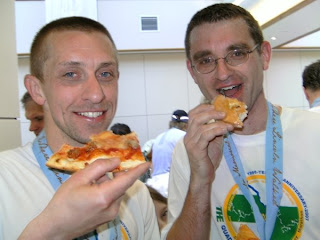 ourses where you'll see the lead runners on their return. Root them on. Then when you're on the return, encourage the runners in the back of the back.
23. At the end of the race, be sure to keep moving through the shoot until you're clear of the finish area.
24. Be sure to partake in the post-race food and drink that's usually provided, but remember that moderation is the key. Not a good idea to stuff yourself after a race plus there are runners behind you that are looking forward to refueling too.
25. Don't toss that bib after the race. Bib numbers are often used for door-prize drawings.
Posted by RunnerDude at Sunday, May 17, 2009

Hey The Happy Runner! Thanks! I always have to remind myself about getting to the race early! I'm always last minute. Need to heed my own advice. LOL!

Greta tips. Now if everyone followed these, it would be smooth sailing through the race.

Hey Running Through Life! I know what you mean. I have to admit I'm in that "everyone" group sometimes. LOL! Especailly the one about getting to the race on time.

Tip for beginners - pin your race number on the FRONT of your shirt!

Hey Will! Good one! Thanks!! Also, don't wear the race shirt you get for the race in that race. Definitely says, "Newbie!"

These are great tips! Also something I should've remembered is being careful when dumping water on myself after taking it from the water station. I accidently soaked a volunteer! Not sure if this happens alot, but I will be more careful next time...

I'd recommend a 5B: You should consume a "normal" breakfast food which you have successfully consumed on prior long training runs (versus your "normal" weekday breakfast - which is likely to be substantially different!)

I'd also recommend a 23B: While moving through the shoot after the race is over be careful not to change your order of finish between the finish line and the exit of the shoot (should the electronic monitoring system fail the race organizers will rely on the order exiting the shoot as a key error-check towards their recorded times).

I'd also recommend a 24B:
If at all possible remain behind after the race to observe the ceremony which follows most races. You'll have the chance to applaud the winners - and as you may surprise yourself by having placed so you'll need to be there to celebrate!

Finally, a 26. Remember that your photo is being taken of you at the finish line. Since we all have a bit of vanity, as tempting as it may be for accuracy sake to snap off your the recording of your run on your watch exactly at the finish line, I've found nearly the same accuracy can be attained by starting and stopping the watch ~3 seconds after the start and stop. This allows a much more dramatic arms uplifted triumphant picture at the finish (especially when setting a new P.R.!)

Hey Mark! Great additions! Actually on #5, what i meant by regular breakfast foods was the foods you normally eat before running. Great tip for the finishing photo. I'd also like to add, not to jump in front of the guy in front of you. LOL! In my very first marthon (NYC) a guy jumped right in front of me and through his hands up in victory. All you could see of me in my finisher picutre was the top of my head!! LOL!!