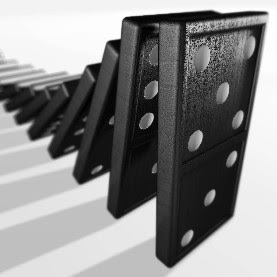 In 2006, I ran the Richmond Marathon, the race billed as "America's Friendliest Marathon." It's kind of ironic that I suffered my first major injury—a stress fracture in my heel— while running America's friendliest marathon. Don't get me wrong, the marathon is a great one and I highly recommend it. Well organized, great support, and a scenic route that begins and ends in Richmond's historic district. A good portion of the course runs along the James River.
It wasn't the race that was unfriendly to me, it was Mother Nature and okay, I admit it, some poor decisions on my part. The race takes place in November. So, I'm thinking cooler temperatures. Well, just like the heat wave of the 2007 Chicago Marathon, Richmond '06 also had an unusual heat wave. Clothes-wise all I had to do was keep pulling off layers, but hydration-wise, I wasn't as lucky. I felt like I had hydrated well the day before the race, but evidently I needed more than I had consumed to compensate for the extra sweat loss due to the unusual heat.
So, you're probably thinking...wasn't this post supposed to be about a heel fracture? You're right, but you see, this injury wasn't as clear cut as tripping and falling resulting in a fracture. Actually I was a bit baffled as to why I had the injury until my doc, Dr. Bert Fields, helped me piece it together and understand the domino effect that had taken place. So let me backtrack a little...
Normally, I'd replace my running shoes about 3-4 weeks before the race, giving me plenty of time to break them in. This time, however, I had good intentions, but I didn't get my shoes until two weeks before the race. Because of the taper in my training, I really didn't have time to break-in the shoes properly and this worried me. So much so, that the night before the race I decided to wear my old shoes. That turned out to be a bad decision.
The beginning of the race was great. Not too hot and the crowd support was wonderful. About halfway through the course, it started to heat up and I could tell I was a little dehydrated. I was taking in fluids, but it didn't seem to be doing the trick. Then at about mile 17, my claves began to stiffen and just plan hurt. It wasn't exactly a cramp, but it was close. I kept waiting for the inevitable knot to form and the soon to follow gut-wrenching pain. That never occurred, but a steady constant soreness lasted the entire rest of the race. I finished, but it took all my strength and concentration to make it to the finish. 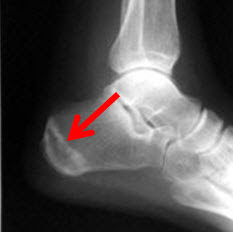 I recovered from the dehydration pretty quickly, but my calves were sore the rest of the following week. But that eventually passed too. Once I started back to running, however, I noticed a pretty severe pain in my right heel. As most runners would do, I ran through the pain and decided to ice it and rest a few days to give it a break. Then the heel started to bother me just standing, so I headed to the doc. He did an ultra sound and discovered that I had a calcaneal stress fracture (a stress fracture in my heel). He said there was some calcification which indicated it was starting to heal, but that my continuing to run was interfering with the healing process. He had me take him through the last few weeks of my running to help him get a better idea of how this may have occurred.

His conclusion? Well, he believes it wasn't one specific thing that caused the fracture, rather a series of events. First, the dehydration from the unusual heat caused my calves to become fatigued. Evidently your calves work like shock absorbers for your feet. So, when my "shocks" blew out, there was nothing but my shoes to absorb the pounding. My last minute decision to wear my old shoes caused me to have very little backup cushioning. 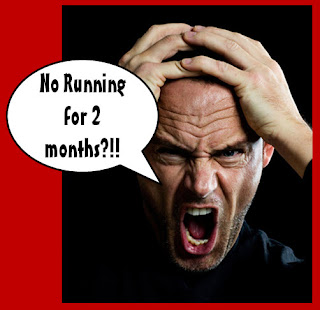 Also, the doc said my feet had very little natural padding on the heel. So between my calves quitting on me, my old shoes, and my naturally pad-lacking feet, my heel just couldn't take it and fractured.
Treatment? The doc gave me several stretching exercises to do and told me not to run. For 2 months!!! On month three, I was able to start adding in some easy cross-training and some treadmill running. It was tough those three months. I still met my running group for the Saturday long runs, but I'd walk about 3-4 miles while they ran 11 or more. Eventually the heel healed and I actually came back to a strong summer of 5Ks and half-marathon racing, setting some PRs in both. I don't, however, recommend fracturing your heal as strategy for setting a PR.

The Domino Effect:
1. Waiting too late to buy new shoes before the race
2. Changing mind and wearing old shoes for the race
3. Unusual heat wave causing dehydration
4. Dehydration causing calves to blow
5. Blown calves causing more direct impact to the heel
6. Old shoes not able to absorb extra impact on the heel
7. Stress fracture in the heel
8. Two months no running. ARRGH!
Lessons learned:
1. Allow plenty of time to break in new shoes before a marathon
2. Don't change shoes at the last minute
3. Burning calves could be a sign of dehydration
4. Don't assume a November race will be a cool race
5. Hydrate, Hydrate, Hydrate!
6. It takes a long time to recover from a stress fracture
Posted by RunnerDude at Friday, May 15, 2009

Great post! A similar thing happened to me with my shoes at Hyannis this February. I waited too long to get new ones and decided to run in the old ones - more than 500 miles on them. Beyond that, I had a hard orthotic in them which was helping my plantar fasciitis, but I think causing me to underpronate. Did the first 18 at about 7:24 pace. Had to stop running at mile 19 with an IT band issue. Couldn't even walk by mile 23 and had to drop out. Took a month and a half before I could start working back up toward normal mileage. Will always be cautious about having new shoes well broken in for future races!

I will definitely heed your warnings, thanks!

Thank you for this post. A very useful information. I will definitely heed your warnings too! : )

Great timing for your post, as I'm healing from IT Band Syndrome and have already registered for the OBX full in November. Following dr's orders, and will be sure to hydrate on race day!

Hey, unpawgal02! Yep, if you're a sweater like me, it's crutial!

Hey Lesley! Glad to hear you're following the doc's orders and are on the mend. I'll send good vibes your way! I hear OBX is a good one. Keep me posted on your training.

Great information! Right this moment, as I sit here typing this, my left heel is hurting. It started hurting during a 14 mile run two weeks ago. And flared up again during my 21 miler last week... and has continued to hurt non-stop since. I assumed it was the start of PF. Are there signs that might point to a stress fracture as opposed to PF (aside from x-rays)?

Hey Rookie on the Run! Sorry to hear about your heel. Well, when I had PF, I noticed the pain more intense in the morning and then it would subside as the day went on. With the fracture, it would flare sometimes during the day. Sometimes when just standing still. Also the back of the heel was very sore to the touch. Also the burning sensation I felt during the day when standing was concentrated in this area too, not the bottom of foot. If you think it may be a stress fracture go ahead and check in with the doc. Mine did an ultra sound to find the fracture and didn't have to do an X-ray. If you think it might be PF check out this earlier posting http://ncrunnerdude.blogspot.com/2009/04/plantar-fascitis-try-this.html Thanks for reading the blog! Hope the heel gets better soon!