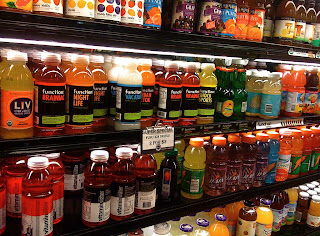 The other day I stopped by a convenient store to pick up a sports drink for my run. I was amazed at the number of different brands to choose from. There were four or five varieties of Gatorade and a couple for Powerade. This made me curious about the history of the sports drinks and gels, so I did a little digging and found some cool stuff (I know, I have too much time on my hands).
A Little History: Looks like we've known for quite a while that the body uses carbs and fat as fuel. Back in 1911, physiologist Nathan Zuntz reported that fat and carbohydrates were both used as fuel for muscles. In the early '20s, researchers at a Boston marathon realized that some runners finished the race with blood sugar levels that were considered hypoglycemic. They discovered that by giving these runners candy during the marathon, it kept them from becoming hypoglycemic as well as improving their performance. In 1932, Harvard researchers reported that by giving dogs carbohydrates 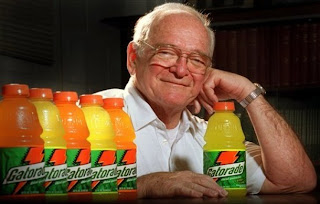 during exercise it increased their endurance. In 1967, when the Florida Gators were being badly beaten by Georgia Tech, the Gators were given a drink created by Dr. Robert Cade that contained electrolytes and carbohydrates. As we all know, the Gators came back to win the game and the first sports drink—Gatorade—was born (took about 20 years for it to really catch on with the masses). Carb-loading before a marathon was first done by Ron Hill at the European Championship Marathon in Athens in 1969. He won the race. He tweaked the process for the '72 Olympics in Munich by doing a long hard run followed by three normal training days with hardly any carbs followed by three days of little to no training but took in large amounts of carbs. Terrorism delayed his preparation and the marathon by a day. This time he took 6th place. In the early to mid '70s there was some debate over whether or not fluids mixed with carbohydrates were good for you. By the 1980s several studies showed that taking in carbs during races longer than 90 minutes improved performance and that if the solution was less than 8% it didn't hinder gastric emptying and fluid balance. In the 1990s sports drinks became much more popular and sports bars and gels started to appear on the market.
Today: With all the recent advances in sports nutrition there's almost too much to choose from on the market. Did you know that Gatorade has 11 different sub-brands on the market? (Original, AM, Fierce, X-Factor, Rain, Tiger, G2, Carbohydrate Energy Formula, Endurance Formula Power [powder], Protein Recovery Shake[powder], and Nutrition Shake[powder]). But that's not a bad thing. Today we have access to a broad selection of carbohydrate powders and drinks that include a combination of complex carbohydrates like maltodextrin and simple sugars like fructose and sucrose. You do need to educate yourself about the products, make sure you read the labels, and test out different products well before race day. Not all sports drinks contain the same ingredients. Some contain sodium, caffeine, and/or protein. The amount of fructose and/or sucrose (simple sugars) varies and some use artificial sweeteners. And don't forget there's always subjective things like taste that may play a factor in your selection. For example, I love the powder version of Accelerade, but the bottled version has a really weird feel in my mouth. You'd think they'd be the same, but their not. 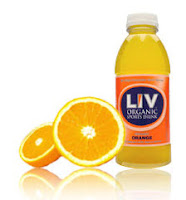 Luckily because there are so many different varieties of sports drinks on the market, you're likely to find something to suite your needs. For example, if high amounts of fructose or sucrose give you stomach issues you can now find ones that have lower amounts like Gatorade G2 or ones that use complex carbs like LIV Organic Sports Drink or Powerade Zero that contains no carbs but does provide electrolytes and sodium.

With so many different types of sports drinks on the market, it's hard to know exactly which one you need. I've yet to see one that says on the label, "Drink me if you run more than 2 hours and sweat a lot." I've discovered three different groups of sports drinks—isotonic, hypotonic, and hypertonic. Doesn't mean much to ya, does it? You're not alone. Didn't mean must to me either until I sorted out the three. Okay, here's a breakdown that might help clarify the three types of sports drinks and when you should use them: 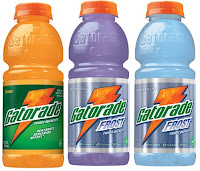 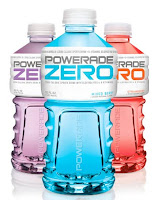 Hypotonic Sports Drinks—Contain electrolytes and a small amount of carbs. This type of drink replaces fluids quickly but doesn't provide much of an energy boost. If a runner uses hypotonic sports drinks on a long run, he/she will need to supplement with sports gels to get the needed carbs. (Examples: Gatorade G2, Powerade Zero, Amino Vital)

Hypertonic Sports Drinks—Contain about 10-15% carbs and usually about 240-320 calories per 500 ml of fluid. These drinks are designed to replenish carb levels after exercise or to top off the glycogen stores before an endurance run. Hypertonic drinks are good for marathons or ultraruns. Due to the high levels of carbs, if hypertonic drinks are used during exercise, it's very important that a runner also take in some isotonic or hypotonic drinks too to help replace fluids. (Examples: Endurox R-4, Gatorade Performance Series, PowerBar Performance Recovery, Isopure Endurance)
Posted by RunnerDude at Friday, May 22, 2009

Thanks JorRuN! Was fun digging into all of that stuff.

You just keep digging and researching and the rest of us will keep wondering where you find the time but will be glad you did!! It is mind-boggling sometimes when you stand there and look at all the products in a larger sports store. Everytime I go to REI there are more drink products on the shelf. I need to work on after-run, seems as soon as I walk in the door I am needed by one of the kids and then I forget all about hydration and fueling.

Thanks for taking the time to research the drinks. I have heard in the past to drink water; how the powerade would upset the tummy. Well, starting Sunday for my long run, you can bet something besides water will be in my bottle. (not booze...)

Great information! It is mind-boggling trying to figure out which sports drink is the right one. I was using Powerade Zero for a lot of my long runs. Thanks to you, now I know why I felt pooped out halfway through.

I got some Cytomax mix to drink for the next week since that is what they will serve on the Rock 'n' Roll Marathon course. Now I'll be looking it up to find out which category it falls into. :)

Thanks for the great information!

Hey Lorenda! I know what you mean. I went in the Viatmin Shoppe the other day to get some gels and I think there was a whole wall of them!LOL! I can totally relate about the kids, although I sweat so much that usually they leave me alone until I clean up. LOL!

Hey Jeff! For long runs you probably do need something more than water or if you're taking several gels you might be okay. Just have to see what works for your body.

Hey Rookie on the Run! I think Cytomax would be fine. It has 95caloried and 20g of carbs per 16oz compare to Gatorade which has 100calories and 28g of carbs. From what I can tell only 11 grams of athe 20g of carbs in Cytomax are sugar the rest are some type of complex carbs which are suppose to help sustain your energy levels longer. I've always heard that Cytomax is often used by runners with sensitive stomachs and that maybe why because it's carbs are made up with as much simple carbs (sugar). Hope this helps!