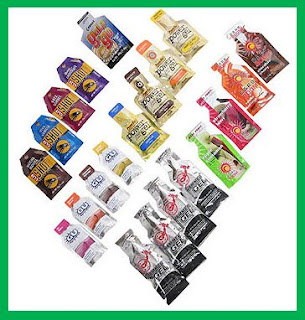 In Friday's post "Gatorade, Powerade, Accelerade, Oh My!" we learned why many runners (including myself) bonk or hit the wall in a marathon. Basically, our bodies have the ability to store about 2000 calories of glycogen (energy) which gets a runner about 2 hours or 20 miles. In a marathon, that puts most of us with about a 10K left to run and not much fuel left in the tank. Sports drinks and sports gels play a vital role in helping keep those glycogen stores from reaching empty.

Sports gels are kind of a hybrid of sports bars and sports drinks. They basically do the same thing but they're a lot more portable. Sports gels do not provide hydration, however. You'll still need to drink water and/or sports drinks to replace vital fluids lost during the race.
Most sports gels ar 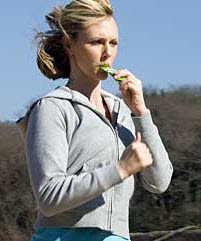 e a combination of complex and simple carbohydrates. One of the first "gels" used by runners was straight honey. Honey contains fructose and glucose, slowing the rate of absorption of carbs which provides energy over a longer span of time. Today many packaged sports gels still contain honey and one brand Honey Stinger is still made mostly of honey. Complex carbohydrates found in gels are usually comprised of brown rice syrup which takes longer to digest and absorb. Some gels also contain extra sodium and/or caffeine. Most gels contain between 100-120 calories and about 25 grams of carbs, but this varies widely among the brands on the market, so check the labels.
In general most gel makers suggest that you ingest one gel every 30-60 minutes of exercise. This will vary from person to person depending on his/her caloric needs and how intensely he/she is running. Don't worry, the gel makers aren't telling you to take so many gels just to make an extra buck. The key to using gels is to get them in your system before you actually need them. If you wait until your feeling fatigued, then you've probably waited too late. Also, because many of the gels contain a good portion of simple sugars, taking them strategically throughout the race will help you avoid that sugar rush and crash. 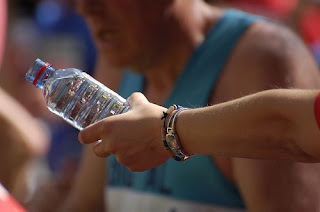 Some runners experience GI problems when using sports gels. This is probably due to not consuming enough fluids along with the gels. So, not only will taking in plenty of fluids throughout the run keep you well hydrated it will also help keep GI intolerance from the carb-loaded gels at bay.
Is there one sports gel better than another? Not really. Experts say that the best thing to do is buy some and try them out well before race day. Use what you already know about yourself to help you make a good choice. If sports drinks comprised of more complex carbs do better for you, then the same probably holds true for sport gels. If caffeine bothers you, then avoid ones with added caffeine. If you sweat a lot, look for one with more sodium. Also, taste and texture may be a determining factor in your selection. I have friends that swear by GU and love it. I really don't care for it's texture. It's too thick for me. 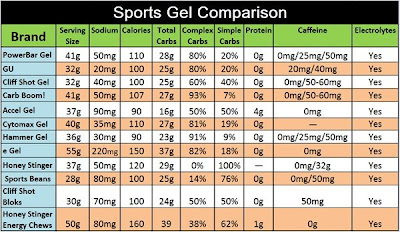 The chart above compares some of most the common sports gel brands (PowerBar Gel, GU, Carb Boom!, Accel Gel, Cytomax Gel, Hammer Gel, e Gel, Honey Stinger). At the bottom of the chart are some newcomers to the scene—beans, shots, and chews (Sports Beans, Cliff Shot Bloks, Honey Stinger Energy Chews). These new products are somewhat like jelly beans or gummi bears and provide the same benefits as a gel. After reviewing the chart, check out the video clip below from RunningWarehouse for a recap on how and when to use sports gels.
Posted by RunnerDude at Monday, May 25, 2009

I'm going to start calling you Professor RunnerDude. You always have great information and a gift for dispensing that information in an understandable, non-egotistical way. :D

Hey Rookie on the Run! Thanks so much for the feedback! You've made my day!

Gels, the nesseary evil. Can’t stand them, but can’t run much longer than an hour without them! Blah!

Hey Adam! Know what you mean. I've gotten so I like Accel Gels pretty well and they also contain some protein to help with recovery earlier. Give them a try sometime.

Wow. I think that's the most complete breakdown of sports gels I've ever read. Thanks! I haven't had to consume gels in a long time (since I ran Richmond in 2003), but am looking at getting back to distance running, so I know they're a necessary evil (as Adam pointed out). I'll have to try some of the newer ones to see if they sit better with me.
Thanks for visiting my blog, BTW.

Hey Brianna! Thanks for the feedback! I'd love to review your book for the blog. A friend of mine heads up "GO FAR" a program that trains kids to run their first 5K. I bet she'd love to see your book. You can check your program out at www.gofarclub.org

I enjoyed your gel report, thanks for the info! I like the espresso ones best.

Hey Sara! I haven't tried the expresso ones yet. Love my coffee so maybe I should give them a try! Thanks!

Hey RunnerDude. Long time reader, first time commenter.
I'm a new runner. Just achieved a 3 mi. base and I'll be slowly increasing from there. My 1/2 mary is in Sept.

I'm wondering what natural foods can work for running fuel. I dont want to get into the manufactured fuels just yet. Right now I'm getting by with a small baggie of raisins, or 1/2 of a PBJ cut in small squares that I eat while I run.
Any other suggestions? Thoughts?