Advice From a Legend: Forget The Mile Markers 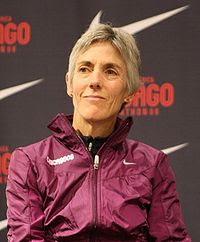 This past weekend I had the honor and the pleasure to hear Joan Benoit Samuelson speak at the pre-marathon pasta dinner for the North Carolina Marathon. One of the pieces of running advice that Joan gave the crowd was to "forget about the mile markers." Upon hearing this, I and the rest of the every-day runners in the room felt an instant bond with Joan—an Olympic gold-medal winner and one of the best runners in the world. Come to find out, she's human, just like the rest of us. Okay, a human, with an extraordinary talent, but nonetheless human. I immediately knew what she was talking about. In retrospect, the marathons I've run in which I struggled the most, I began looking for each and every mile marker, counting down the miles hoping the end would soon reveal itself. When you're in pain, from cramping legs, dehydration, or fatigue, those mile markers might as well be 100-mile markers. It seems like an eternity before the next one appears.

Joan suggested finding other focal points that would be more beneficial to your run. She suggested finding a runner ahead of you to set your eyes on and make it your goal to catch up to and then pass. Then find another runner ahead and repeat the process. Seek, catch-up, pass, and repeat. In 2006, Joan ran part of the NYC Marathon with Lance Armstrong. She said she was worried he wasn't going to make the sub three hour time he desired. She finally told Lance, that he had to forget about the mile markers and focus on the runners ahead if he wanted to cross the finish line in under three hours. He must have heeded her advice. Lance finished with a time of 2:59:36. 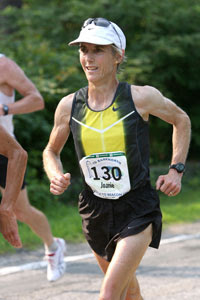 Joan also acknowledged the fact that a marathon is a long way to run—further strengthening the bond with the crowd. She suggested breaking the marathon up mentally into segments. She often thinks of hers as an easy 16-mile run, followed by her favorite 10-mile training route. She recommends choosing a segmentation that works for you. You may visualize your favorite 10-miler, 8-miler, 5-miler and then your favorite 5K. Just don't make your segments the mile markers. The combination of visualizing a familiar run and breaking the race into shorter more manageable segments is powerful in fighting off the mental and physical fatigue that marathon runners often experience.

Finding a mantra that's meaningful and powerful to you was another helpful tip that Joan provided. She's had many mantras over the years including "One step at time" and one she borrowed from Bruce Jenner, "Feet don't fail me now!" She stressed that a runner needs to find a mantra that's meaningful and personal that will motivate and inspire during those trying times in a marathon. Joan called marathon running "a metaphor for life," inspiring both the runners and nonrunners in the room. I think that may just be my new mantra, "Marathon running is a metaphor for life."
I've met some famous people over the years, but never a true legend—well, until this past weekend. The thing about the other personalities I've met is that there was no connection. It was fun to meet them, but they remained on that distant pedestal. Joan Benoit Samuelson, however stepped off that well-deserved pedestal we had put her on and shared intimate family photos, childhood memories, and her running achievements. Her down-to-earth feel and welcoming demeanor made several hundred runners, including RunnerDude, feel mighty special.
Posted by RunnerDude at Sunday, May 03, 2009

And how many people get to say they splashed water all over an Olympic champion at our water stop? (Sorry Joan)! What an inspiration she is.

Hey Will! Tis true. Something to tell the grandchildren. LOL!! Was surreal watching her fly by the waterstop.

Full of great advice from a running legend. I've always looked at running as a metaphor for life, its really neat to hear her say that. Thanks for an inspiring post!

Hey Terri!Thanks for the comment! I think Joan's words are gonna stay with me for quite a while.

Yes! Another fan. It's one of the things I love about her -- she's reached the top pinnacle of the sport yet remains as human and down-to-earth as you can imagine. And still a force to contend with. Glad you were inspired too.

Hey Lisa! Yep, definitely inspired. Thanks for the opportunity to hear her speak.