Chariots of Fire Meets The Terminator 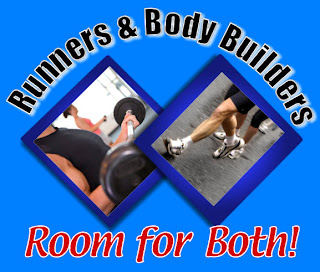 Ever been in a situation where you know you're in trouble and you're not quite sure what you're going to do to get out of the situation? Not a great feeling, huh? I had such an experience this past Friday at the gym.

I've been working on functional resistance training to increase leg-strength and Friday I was on the leg press machine. I was quite impressed with my puny-self pressing 230lbs. All was going really well. I could feel my glutes, hamstrings, and quads expanding, and building muscle as I was pumping that iron (okay it was all in my head, but my backside was burning). All was fine until after repetition #10 when I was trying to engage the safety in order to stop the weights and allow me to take a rest before the next set.
Problem was, the safety would not engage. Try as I might, I could not get the safety to work. Earlier that 230lbs felt really good, but now that same 230lbs felt like 460lbs! As my life was flashing before my eyes, I was trying to figure out a way to get out of this predicament that didn't involve me becoming a flattened pancake.
Luckily right behind me, an "Arnold clone" was doing back squats on the Smith Machine. So, in the deepest voice I could muster, I said, "Hey man, would you mind helping me a second?" Evidently he had been watching me squirm in this predicament and said, "Yes" with a little chuckle in his voice.
Using his hands, he pushed up on the weights to give my legs a break while I continued to jimmy the safety trying to get it to engage. Still no luck. By this time, I was the talk of the gym. Two more Arnold clones came over to see what was going on. Now two guys were holding the weights up while a third tried to engage the safety. Fortunately (saving me some pride) he too could not get it to lock in place.
Then one of the hulks said, "Just lower it." I'm thinking, "What?!!!" So down the weights go and so do my legs, my knees getting closer and closer to my eyeballs. Wishbone was coming to mind. Then finally, "click!" The bar stopped. Unbeknownst to me, there's a backup safety, so if the handheld safety doesn't latch or comes unlatched, you won't get squished.
So, out I scrambled as quickly as possible. Upon further examination, we discovered that the safety was hanging and was in fact not working properly. I was so glad that it wasn't just due to my ineptness.
The one good thing that came from this adventure was I actually communicated with the "Big Boys" in the gym. It's always been "Us" and "Them." The "Haves" and the "Have-nots." Myself being one of the latter. Well on Friday, we found some common ground. Even though I was about a fourth of their size, I seemed to impress them (just a tad) with my knowledge of resistance training. And I realized that these guys (even though they're huge) are just regular Joe's. When I told them I had run 10 marathons, that gained a little respect too. Each of us had strengths, just in different areas.
Will this fiasco keep me from working out in the gym? Heck no. I may be checking the safety on the equipment before climbing in, but it won't deter me from working out. Plus now I don't feel so intimidated by the Big Boys.
Posted by RunnerDude at Sunday, December 20, 2009

It is amazing how different the atmosphere is in the gym vs. out on the trail or the sidewalk. I always feel like I get a reality check when I enter the gym - I feel so strong as a runner, but there's so much else to do for overall health!

Occasionally I will run to the gym (6 miles) to get a good workout. Combining the best of both worlds!

Great post. And good to know about the backup safety! I hope that never happens to me.

This story seriously made me laugh!!! Glad you are okay though. Happy Holidays :)

Hi Melissa! A good balance of it all does a body good. Now, if I just had enough time to get it all in!

HAHAHAHAHA! thatz hilarious! dude, EVERYONE knows that there is a back-up safety on those machines! they wouldn't engineer it to kill you! :)

btw, those "big boys" @ the gym would die if they tried to outrun you...so don't go thinking you're all that puny!

Funny and scary at the same time! Glad it all worked out. And yes those gym dudes aren't all bad...I married one actually...

Hey KMo! In retrospect, I guess I did know the backup safety was there, but this one was really low, I kept lower and lower and nothing latched. I'm still laughing over it!

Sounds more like Chariots of Fire meets Indiana Jones... I'm crackin' up at the image of the weights slowly crushing you (Arnold would call that Schadenfreude).

You crack me up, especially that you used your deepest voice to get help. That's kind of like a girl using her "helpless" look and flashing a smile. I didn't know guys did that!!! :-) SEriously though, glad you're okay and good to know there's an additional safety.

Thad - I admit I laughed while I sympathized. The first time I benchpressed anything, I added weight to the bar without realizing the bar is another 45 lbs. The bar went up, the bar came down - and then it never came back up. On my first rep I was crushed and trying to figure out how to slowly and quietly roll it off my chest. Luckily the Arnold clone was close by and he helped. From that day on I never walked by without saying hi or talking to him as he did me. It was an icebreaker - but one I'll never use again. I'm sure you'd agree.

Glad you weren't hurt. You meet people in the strangest places when you least expect it. Isn't life interesting?

Wow, what an experience you had. Thats great that you found some common ground with the giants. It's cool that they came over and helped out. Will you be using a spotter the next time, even though it's a one person machine? Be careful, don't want a runner-squashed-dude. Take care and Happy Holidays.

Hi Lara! It's even funnier because I've used the leg press a zillion times, but for some reason that day it wanted to give me trouble. Guess it was a good experience to show myself that I can get out of a sticky perdicament if needed. LOL!

Hey Tony! Life is definitely always interesting. Having 3 kids makes it interesting enough. Hope you guys have a great holiday!

Hey Kenley! Is kind of funny, bedause I'm a personal trainer. Just goes to show you....
Probably won't use a spotter on the leg press, since now I'll definitley remember about the backup, but most definitely use a spotter on other free weight heavy exercises like back squat or bench press. Like the new logo man! Hope you guys have a great holiday!

Wow. That story could have ended a lot differently! Glad that Arnold was there.