Kyle Petty Runs More Than One Kind of Road Race! 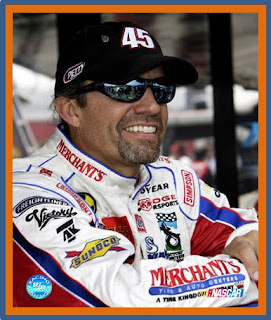 Kyle Petty is not only a race winner in NASCAR’s top series, he’s also a marathon veteran (Las Vegas, 2005, and Disney, 2006; PR of 4:16:01 at Las Vegas). Petty will take part in the 5-mile run at Sunday’s Run to Victory road race in Randleman, NC, benefiting the Victory Junction Camp that he and his wife, Pattie, started in honor of their late son Adam. After his run is complete, he’ll greet runners as they cross the finish line.
Petty took a few minutes by phone recently to talk about the Run to Victory and his own running efforts.
On the Run to Victory event: “Really when it started was when I talked to John (Bingham) when I ran the Disney marathon (January 2006). It was the first time we had met. We had no expectations. Out in Level Cross, it’s not that people don’t run, you just don’t see ‘em running up and down the streets like you do in Greensboro or other places. But from the first year to the second year to the third year, it’s almost doubled every year. I don’t think it will double this year. But if we have a 20 or 30 percent increase, that’s realistic. It’s just gotten bigger and better, and the community has embraced it a lot more. The first year people were mad about shutting down country roads.”
On its proximity on the calendar to the Mistletoe Half Marathon in Winston-Salem: “We get local people, but honestly a lot of people we get are race fans. Tons of race fans. That’s amazing. We just get a lot of people that travel and will come run this run. There are a lot of walkers, a lot that come to do the 5-mile. They’re just race fans. If I’m there, Michael (Walitrip), they want to meet Michael. I always try to stand at the start-finish line and greet everybody as they finish. They just want to be around the camp. We have a donor base of about 60,000 or 70,000 people. A lot of people come and look at it as a donation to the camp as much as the run.”
What will your role be on race day? “Mostly I say the prayer before we run. I just give a blessing for a safe run and for everybody. The first couple of years I went straight to the start-finish line. Colin, a camper with us, challenged me to run the 5-mile with him. We ran-walked 5 miles, and it was a lot of fun to be with him and his family. Colin, since he beat me, he’s got to greet me when I get there. I will run with some of the campers.”
Will your dad, “The King,” be there? “Most of the time he is. What he does, he kinda cheats a little bit. He comes in to the cafeteria and eats while everybody else is out in the cold running. He never advertises that he’s going to be there. He just kinda shows up most of the time.”
How’s your running going? “I hurt my knee in a wreck (Phoenix, November 2008). I hit my knee on the steering column and I kinda cut back. I just recently started running again in the past six months. I’m kinda out of shape.”
How much are you running in a week’s time? “Not much. Maybe eight miles, maybe 10 at the most. I’m trying to ease back into it.”
What enjoyment do you find in running? “I don’t think people understand how much racing is a team sport. From the driver to the crew chief to the guy who busts his rear end to build those things. It’s a total team effort. At the race track, you’ve got 150,000 people everywhere. You’re in a crowd all the time. What I get out of running is the solitude. When you go out when it’s pouring down rain like today, or you go out and it’s 20 degrees or 100 degrees, it’s just you and a pair of shoes."
What’s the most success you’ve had running? “Every time I make it back to the house is successful. ... This is going to be strange to most people, but I was training for my first half-marathon in Las Vegas. It was in January. I started training, really, in November. I thought I could do it in two months. Little did I know you really couldn’t. But I never ran outside until I got to Vegas. I trained totally on a treadmill. What I’ll never forget was when got to the fifth mile, that was the farthest I’d ever run outside in my life. I’d run when I was in school and run to play sports. I’d run two to three miles plenty of times. So what’s the biggest success? Making it five miles. I thought, ‘Hey, I’m outside and I’m running.’”
Run to Victory web site.
Register for the half-marathon or 5-mile run.
A Big thanks to fellow blogger and friend Eddie Wooten from the Greensboro New & Record who originally published this interview on his Blog, Running Shorts and allowed RunnerDude to repost it here for you on RunnerDude's Blog. Thanks Eddie!
Posted by RunnerDude at Wednesday, December 09, 2009

Whoa! you got to talk to kyle petty!??! That is pretty sweet.

Not so much anymore, but I used to be a NASCAR fan when I was growing up. I suppose being from the carolinas, you almost have to be, right? Don't you get assigned a drive to be a fan of at birth?