All Yellow Muffins Are Not Created Equal 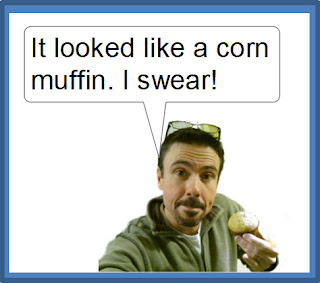 One of my many talents besides running is cooking. My wife is a 1st-Grade teacher and often doesn't get home until after 6PM from preparing for the next day (all you fellow teachers can relate, I'm sure). So, I usually play the role of executive chef. That's right, just call me Mr. Mom (I do laundry too).


Now tonight, like any other night, I was preparing dinner. Unlike most households, in our house, dinner doesn't begin with prepping the food. No, in our house it begins with clearing off the counter and doing yesterday's dishes (okay, I do laundry, but dishes just aren't my thing). But before the dishes can be washed, I have to get the plunger to unclog the sink that has backed up with water from the dishwasher. You see the garbage disposal broke about a year ago. Yep, it's on the to-do list of things to fix along with the leaky toilet, the broken banister, the front stoop railing that needs to be painted, yada, yada, yada. Anywho....tonight I was fixing one of my specialties—pork-n-beans and franks and corn bread. (I know, I know, but it's cheap and I use the fat-free franks.) I even added some canned corned to the corn bread mix.


All's going well, but I keep smelling something that reminds me of banana bread. I ignore it because my 14-year-old daughter was also doing some holiday baking and I just assumed it was something she was cooking. So, now I'm feeling really good. Dinners cooking, the Christmas music is playing in the back ground, the kitchen is semi-clean and I'm spending time with my daughter. Not quiet a Rockwell moment, but close. Then my daughter asks me why I'm baking banana bread. Of course a perplexed look comes over my face as we both head for the trash can to find the corn muffin mix boxes. Yep, you got it. Chef RunnerDude has just prepared banana muffins with added corn to accompany his main entree of beanie weenies!


My daughter and I laughed and laughed and laughed. We said nothing about the mix-up to my wife, 18-year-old son, or my 9-year-old daughter. We had a big ole second laugh as we watched them discover the banana corn muffins. The expressions on their faces kind of reminded me of that face you make when you take a big ole swig of your long awaited cola only to discover it's tea, instead. Your brain's telling you it's one thing, but your taste buds are telling you something different.


You know what though? Those banana corn muffins weren't half bad!


My experience tonight with the banana muffins reminds me of something most runners are guilty of—ignoring the obvious. Often we'll feel a little twinge or pain and we tell ourselves that it's nothing and that it will go away. And, even when it's months later and we're still feeling that twinge we still continue to delude ourselves into thinking it's nothing. I know I've been guilty of it. Then when the pain becomes unbearable, we'll finally head to the doc to discover its something major that could have been prevented if tended to earlier.
-
If it looks like banana bread and it smells like banana bread, then it's probably banana bread.


So, join me in making a New Year's resolution to be more in tune with the aches and pains associated with running, not to let those twinges go on too long, and to make an appointment with the doc when things don't clear up in a few days. Oh yeah, and to double check the muffin box before putting it in the cart. All yellow muffins are not created equal.
Posted by RunnerDude at Wednesday, December 23, 2009

Heh-your kitchen sounds just like mine-the counter seems to be the place where all sorts of stuff collects! Maybe you've hit on a new gourmet treat-banana corn muffins!

Thanks for providing a good chuckle. That was really funny. What's that banana smell?

Love the metaphor, and glad the banana corn muffins worked out. Speaking of being more in tune with your body; today I'm skipping my Christmas Eve run with the ladies because it's 7 degrees out and I have a head cold. See, I'm listening to my body!

Banana corn bread...I think you may be onto something! Great reminder too, hopefully there won't be too many twinges in 2010...happy holidays RD!

Merry Christmas to you and yours RD! :)

umm, yea, Dude....corn is not a veggie.....
and i LOVE IT when my brain expects one thing, but my mouth delivers another. happens TOO often, actually....
Merry Christmas!

Bananas and corn, hmmm, not a very good combo! Merry Christmas Runnerdude and family! Hope you have a blessed holiday and see you in 2010 on the greenway!