The Half-Marathon—Not Just a Stepping Stone 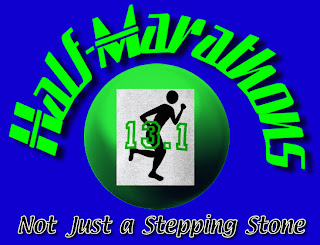 While half-marathons have grown in popularity, they are still often overlooked. Once that 10K has been accomplished, many runners want to jump right to the marathon. Nothing wrong with that, but a half-marathon can be a great training tool in seeking that bigger marathon goal. The half marathon is also just a great race in itself.

The half-marathon is just about the longest distance race a seasoned runner can run without changing his/her regular routine. There will be training and there will be long runs, but the time commitment isn't nearly what's involved in training for a marathon. Because of this, training for a half-marathon can be a great stepping-stone for newer runners who are eventually wanting to conquer that 26.2-miler. It's also a great way for the seasoned runner to get in some great endurance races without having to carve out a huge chunk of time training for just one race.

Often it's thought that the half marathon is just that—half of a marathon. It is definitely that, and it does involve a good amount of strength and endurance. But often runners don't realize that the half-marathon has a speed component often not a part of a marathon. The combination of endurance and speed can make this a fun race to train for as well as compete in. Training for a half-marathon will also help pick up your pace in other shorter distance races such as a 10K.

As with any endurance run, you'll still need a good base before beginning your half-marathon training. This varies from person to person, but you should be logging about 20 miles a week for a month before beginning your training. Sometimes base building and training get confused. Often runners think the first few weeks of a training plan is the base-building phase. The confusing lies in that it is the base-building phase for the training plan, but the plan is not assuming you're starting from scratch. It's assuming that you already have a good base tucked under your belt.

It takes your body about 4-6 weeks to acclimate to a particular distance. So for example the first time you run 6 miles, you may feel good, but that doesn't mean your body has acclimated to running at that distance or intensity. If you keep running that 6-miler and even do an 8- or 10-miler, then about 4-6 weeks down the road is when your body becomes accustomed to running that 6-miles. So in other words, base-building is key in getting your body used to running various distances as well as the cumulative miles. If the line between base-building and training blurs then you risk the chance of overtraining which could lead to the "I" word you want to avoid—Injury.

Once you have your base and your ready to start your training, then what? You need to find a plan that's diverse in it's training. Your plan should involve a Base, Sharpening, and Taper phase. The "Base" within your training plan is usually just a few weeks where you're taking that good base you've built and you're gradually increasing your weekly mileage and adding some distance to your long run. The "Sharpening" phase is the time in your training when you begin to add in more workouts focused on endurance, pace, and/or strength. In other words your long runs get longer, you add in some faster-paced runs such as tempo runs and/or interval workouts, and you add some hill workout to build strength (as well as speed). The "Taper" phase is usually the last week or two prior to race day. The total weekly mileage is usually decreased to 50% the week prior to the race.

The length of half-marathon plans is all over the place. You'll find plans for 12 weeks all the way to 22 weeks. Look closely. Typically the shorter programs have very little base-building incorporated into the program and the longer programs will have more weeks of base-building included. A longer plan may be more beneficial to a newer runner, while a shorter plan is probably better suited to a more seasoned runner who already has a solid base of weekly miles.

From personal experience, the weekly speed workouts (I did interval workouts) is the key to a fast half-marathon. Now, I'm no speed demon, but my half-marathon PR is 1:30:47. No record-setter, but for a 40-something, a 6:55 pace per mile ain't half bad. My fastest time prior to adding speed work was 1:36. I cut 6:13 from my time in just one season from adding a weekly speed workout to my training plan.

Why do interval, tempo, and hill workouts help improve your endurance and speed? VO2Max! Your VO2 is your body's ability to take in oxygen and use it. The more oxygen your body is able to take in and utilize, the longer and harder your body can go before fatiguing from lactic acid buildup. Ever get that burn in your legs that makes you feel like your trudging through mud? That's lactic acid fatiguing your muscles. The best way to push out your lactate threshold is by doing speed and/or hill work. Even though a half-marathon is an endurance race, having a higher VO2Max will help you keep that fatigue at bay. Also, later in the race when you need to kick it up a notch, you'll have the reserves to do so. Also, your body will be used to that extra speed requirement and you won't throw your body into shock. So, be sure to incorporate at least one speed and/or hill workout into your weekly training routine. A good half-marathon training plan should include some type of speed, tempo, easy, and long runs for each week.

So, work on building your base, check out some training plans, and get in gear for some great spring half-marathons! Half-Marathon.net is a great resource for finding half-marathons across the country and even the world!
Posted by RunnerDude at Tuesday, December 22, 2009

This is a great post. I ran my first half-marathon as a training run for the full marathon I would run 2 months later. I neglected to see the accomplishment until it was over - I was already up to running 16 miles before I ran it. After the race, though, I realized I had just done something really great!

This spring, I will train for and run a half marathon not as training for a full. I look foward to the speed training that I didn't do as part of my first marathon. It should be a lot of fun!

Hey Melissa! That's awesome! Keep me posted on your training!

This is so helpful! Thank you!

Despite having run the skin off my big right toe in my last half-marathon (stupid cold rain), and crashed my way through the one before that (triple lakes), I think the half might be my favorite distance. Plenty of time to chase people down, so I don't feel pressured to start really fast like at a 5k or 10k. If there is a struggle, it's not too long of a distance for my wimpy willpower to drag myself to the finish if need be.

I'm with ya Josh! A half gives you time to get settled in your pace and enjoy it. I never feel like I'm in my groove in a 10K, especially in a 5K. I'll always to marathons, but I'm planning to get more half in for 2010!

Hey RD! I did things a bit backwards and ran a full before a half. What I found is that unlike the marathon I used the halfs to try to meet a time goal. In my mind it's the perfect distance; not too long, not too short.

Thanks for the link! I preach this to my running friends that go out 5 days a week and just run the same distance or the same loop. Great you're running a ton but not getting any faster---try some speed, try the track, try just doing hill repeats! Great post! It's not just about running 40 miles a week its HOW you run those that really add up :)

He ShutUpandRun! I agree. I love my marathons, but I'm much better able to predict my halfs than I am my fulls. Plus I'm not so dead afterwards!

Glad it helped PocketFullofPink! Welcome to the blog!

Hey Unathleticrunner! Tell your running buddies that running at a slow pace for a long distance releases cortisol which can eat away at your muscle therefore decreasing your metabolic rate therefore increasing your chance of gaining weight. LOL! Best way to counter balance that is by doing speed workouts. Speedworks also release natural growth hormone which is believed to help keep us younger! I bet they'll be runnin fast now! LOL!!

I/m training for the Indy Mini (half marathon) I have ran it 4 other times, and adore it! 13.1 definitely seems more attainable than 26.2!

i recently decided NOT to run the Key Bank Marathon in VT. end of May is too soon for me, and i don't want to ruin my legs or risk injury for other halfs and such i have planned for later in the summer. i have decided to seek out a 'fun' marathon for the late summer early fall.
thank you for this post!

Great post!!! The half marathon is by far my favorite distance. I've run all race distances up to the marathon and I keep going back to the half. You are dead on regarding the combination of endurance and speed. It is such a challenge to get that mixture right but when you do, look out! What a fun distance to race. I wish more people would focus on it instead of glossing over it and using them as "training runs" for their marathons. This leads to a lack of respect for the half marathon and I bet if more people focused on the 13.1 they'd be faster in their 26.2.

Nice post. I am appreciating all the great input you have given me in the last year. Thanks for the stuff!

I just blogged about running like Pheobe (Buffet), which goes to show how much I am fodder of the internet!

Hey Chad! Not fodder my man!Just read it. Great post! I think I may even still the Phoebe running idea for a different slant for a post! Awesome!