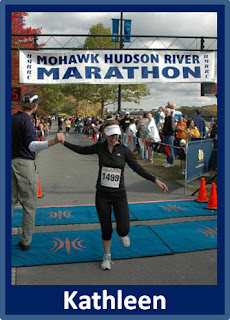 Kathleen from Albany, NY has a great outlook on her running as well as life. Check it out in her own words:

"I Could Never."
As a vegetarian and long distance runner, I have heard those three words over and over for more than a decade. “I could never give up meat.” “I could never run that far.”
“I could never” a self-limiting excuse masked as praise. “I’m not able to do that yet” or “I don’t have the passion to commit to that” is what many people mean to say. By saying “I could never," they subconsciously shut down their potential by telling themselves they're not capable of achieving anything they put their minds to.
When I finished my half marathon I officially crossed “I could never”off of the list of things I say. I can choose a goal, and I can commit the time to achieving it. If I am passionate about my goal, I have the motivation to succeed.
For me, running a half marathon means “I could never” limit myself again.—Kathleen • Albany, NY
Kathleen, your story reminds me of a saying I used to hear as a kid, "Can't never could." You're exactly right. A person definitely puts himself/herself at a disadvantage when he/she says, "I could never." Sometimes when you set a goal, you don't make it, but that's a part of the learning process. If you never try, your never learn and you miss out on a whole lot of run along the way! You just proved my theory! I'm thinking we should change the old saying from "Can't never could." to "Can't always should." Thanks Kathleen!
Posted by RunnerDude at Monday, November 30, 2009

Way to go, Kathleen! Crossing out the "I could nevers" is a great accomplishment...as is finishing a half marathon! :)

Great Post, and way to go Kathleen. Well said on the telling yourself something to try and create a justifiable excuse. You are just putting limitations on yourself.

Great post Kathleen! I love it that you ran a marathon with mowhawk in the name. Going to have to add that one to the list!

WTG Kathleen!! I also ran the USMC 1/2 Marathon and I think we finished within a few mins of eachother. I love your attitude!

Kathleen, Congratulations on your half marathon! I love being able to cross things off of a list that I never thought I could do! had, I tell my kids all the time "can't never could"!